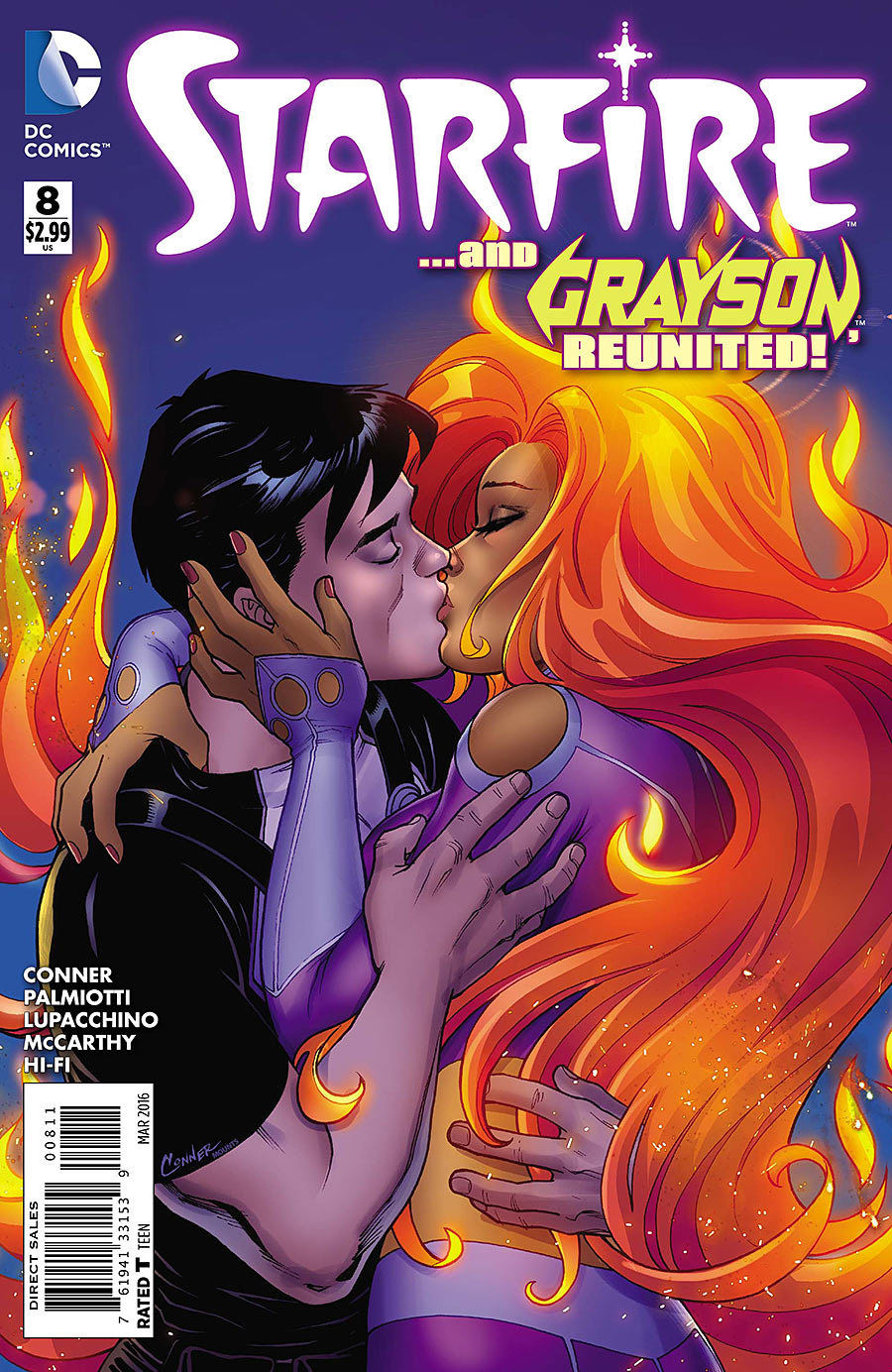 A little bit more of what makes Harley Quinn shine so bright makes itself felt in Starfire this month as Kori finds herself in a love triangle without any conflict!

When last we saw everyone’s favourite Tamaranian (nobody likes you, Blackfire), she was in her own version of the denouement of a James Bond flick, adrift at sea with nothing but a bottle of champagne and a smooch from Dick Grayson. The surprising part, as we pick up this issue, is that there’s no real expectations of anything further happening between them any time soon. Much like when he nearly crashed Alysia’s wedding in Batgirl #45, Dick swung in on Kori in the middle of a date, but this was more or less a chance encounter and not Dick’s attempt to pry Babs away from the life she’d built for herself in Burnside and her fledgling relationship with Luke Fox.

In essence, there’s a world of difference between the reunions, but this is fiction, and so the circumstances are exactly what Conner and Palmiotti intended. What we get here is that Dick and Kori are in effectively the same place in their lives and can’t promise anything more to each other. Even if it takes prodding from Kori for Dick to come right out with it, he gives her enough credit not to expect anything more.

It’s another one of these situations that a more conventional title would exploit: a misunderstanding to fuel unnecessary drama like a cliched three act romantic comedy. Couple falls in love, a misunderstanding occurs at the close of the second act, they fight and become estranged only to be reunited in the third act, etc. It’s a pattern of behavior that Harley Quinn has confronted directly in Conner and Palmiotti’s other monthly title, prodding at the fourth wall all the while.

The real bulk of that conversation and the relationship dynamics threatened by Dick’s surprise appearances play out between Sol and Rave. Rave prods Sol about his apparent nonchalance about Dick’s mission breaking up their date and Kori’s subsequent running off with him, and Sol replies that he understands Kori’s basic nature and is willing to work with it. Even when Rave reasserts her feelings for Sol, it’s in a moment of quiet intimacy between them set against a gorgeous sunrise.

This is a comic where people talk their problems out, and more often than not, take stances that are less selfish and more compassionate than you’d typically see not just in fiction, but all too often in real life as well. In my review of the previous issue, I tackled how the trauma in Kori’s past has lead her to want to pet every goldfish that goes by and not ruin brief chances for happiness as a rationale for why she was more willing to hook up with Dick without recriminations about his having faked his own death.

In addition to the wider conversation between them that affirms this as they wander through a local graveyard, Sol’s position on his relationship with Kori and how the loss of Maria informs his patience with her ties it deep into the DNA of the series. I’ve described before how Conner and Palmiotti’s Key West functions as a kind of sanctuary both for Kori and metafictionally within the DC lineup, but it isn’t a place that ignores the pain that lead people there. It’s a space to work through it. If the modern reading of Superman is to interpret him as an immigrant and imbue his stories with the spirit of the immigrant’s experience of integrating into American society, then the current iteration of Starfire is best seen as a refugee.

We’ve already seen the first of what will probably be many bounty hunters sent to find her from across the galaxy, a fact that Dick and Kori discuss briefly this issue, but more immediately we see just how sensitive Kori remains to what’s considered to be mundane violence in her new home. Kori flinches and ponders her unease with Dick torturing one of their attackers for information, voicing an inner conflict over the apparent necessity of violence to preserve the peace she’s found in Key West.

Despite the overall fluffy look and tone of the series, Starfire may yet provide the space in the DCU to confront the casual violence of superhero fiction the most effectively. Case in point, the vast majority of modern psychological research into the correlation between PTSD and torture has used refugees from war torn countries, the Balkans especially, as subjects. Kori, with her traumatic past, struggles to assimilate into American/Earth culture, and discomfiture with violence and torture is undeniably an ideal fictional mirror.

The key, as always, to Key West is Lupacchino and Hi-Fi, who are tasked with creating and maintaining the feeling of sanctuary. That makes the image of Lupacchino’s boyish Dick stomping on a gunshot wound to get information out of an attacker far more jarring than it would be in any other DC book, but on the whole she works to swing the balance from the violent realities to the hopeful resumption of the idyllic elements of life on the island. Which is how the issue ends, with Sol pulling Kori into the pool for some smooching of his own. This is also definitely Hifi’s strongest issue of the series so far, in terms of impacting the storytelling. All the typical hyper-saturated tropical colors are here in force, but there’s great instances this issue of how both subtle and gigantically over the top coloring can work to reinforce the story beats.

The first, as mentioned earlier, is the soft glow of the sunrise as Sol and Rave discuss their feelings about and for each other. It isn’t quite as ambitious as Jordie Bellaire’s use of sunrise and sunset in Plutona, but the overall effect is to build a warm and inviting space to air out what’s between the pair, providing a clear antithesis to the typical bickering and resentments that drive these kinds of plot threads. ‘

The second is the eye searing full page splash of Kori unleashing her powers against her and Dick’s attackers in the graveyard. Kori discusses her internal turmoil over Dick torturing one of the attackers later, but there’s also a point to be made about the visual spectacle that accompanies Kori’s violence. There’s a breathtaking beauty to the swirling colors and lights she unleashes that, seen from a particular angle, do a lot to highlight the seductive qualities of violence that obscure the harsher realities behind them.

Month in and month out, Starfire is the Gary Fisher of the DC line up, a calming presence that offers a space far away from what Wonder Woman creator William Moulton Marston described as “bloodcurdling masculinity.” The book offers up a vision of Key West that has a lot more in common with his Themyscira than we’ve seen in a very long time.