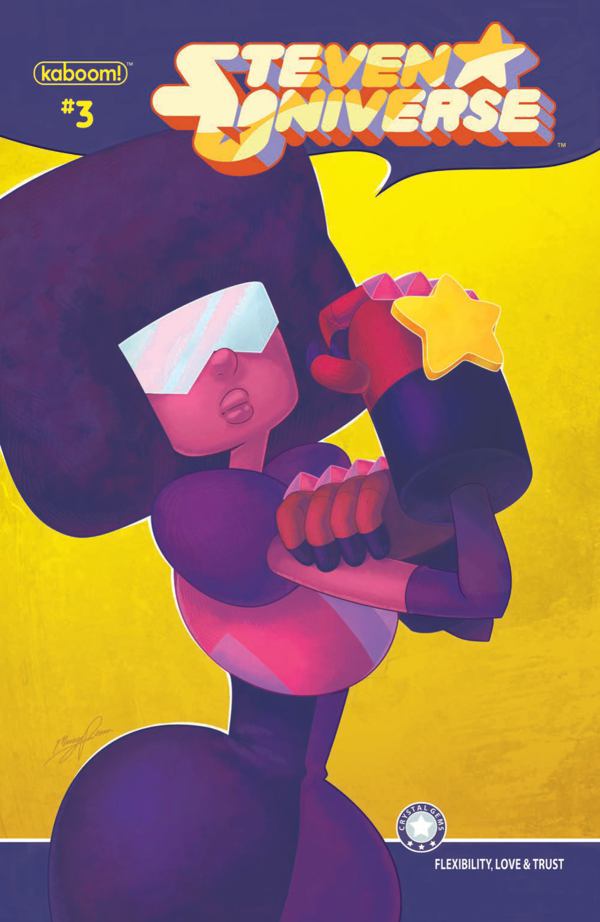 Mobile cuisine is the future!

Business isn’t quite booming in Beach City and Mayor Dewey feels the pressure to help his restaurant owning citizens. Buck’s grand idea of food trucks is awesome, just not for the town. With a new shade to this dilemma, the Mayor has to pull something together and keep the town bustling and his people happy.

When starting its third issue, I wasn’t sure what Steven Universe was getting at. On the heels of a stellar second issue that discussed gender, disclosure, and consent, I had a lot of preconceived ideas about what would happen in the story. What I realized though is that this creative team is still embracing the core idea of this mythos and I forgot that there is an entire world in Beach City that deserves to be explored.

I like the structure Melanie Gillman uses for the issue. While it can feel somewhat dense, the narrative framework still conveys the conflict and subsequent resolution through engaging interactions between characters. Everything feels like it has a place among the story, from dialogue to feelings, and how they come together is an example of Gillman’s skill for crafting character work and showcasing different sides to the people within the story.

Mayor Dewey as the center of the plot was a weird choice, but where it ended up was nothing but excellent. We get to see that he is a man who cares, it’s just that it is expressed through his own idiosyncracies. His relationship with Buck is heartwarming, which helped me see that we don’t know much about him or his relationship with Buck besides his son’s own adolescent musings. To see this side of their connection meant that the world of Beach City is still very new and there are more places to see life than I thought about before.

Katy Farina’s illustrations seem to take on a new spirit compared to the last issues. Brightness and joy come alive in characters’ eyes, leading to a much more childlike tone that helps deliver the right emotional notes. Whitney Cogar expresses idyllic atmospheres, especially in the outside scenes, which accompany the lightheartedness of the comic. Every color is clear and distinct, building to an optimistic mosaic throughout the story.

Steven Universe continues to be a comic that inspires awe and touches you right in the feels. I’d honestly expect no less, so it’s good to see this series is in good hands. The creative team is adaptive and adept when it comes to storytelling, vivifying Steven’s universe but without the need for him as a central character to drive the plot. Issue three proves that there are so many more stories to explore and that each of the individual characters that live in this oceanside town have enthralling lives of their own which are captured in sentimental moments.