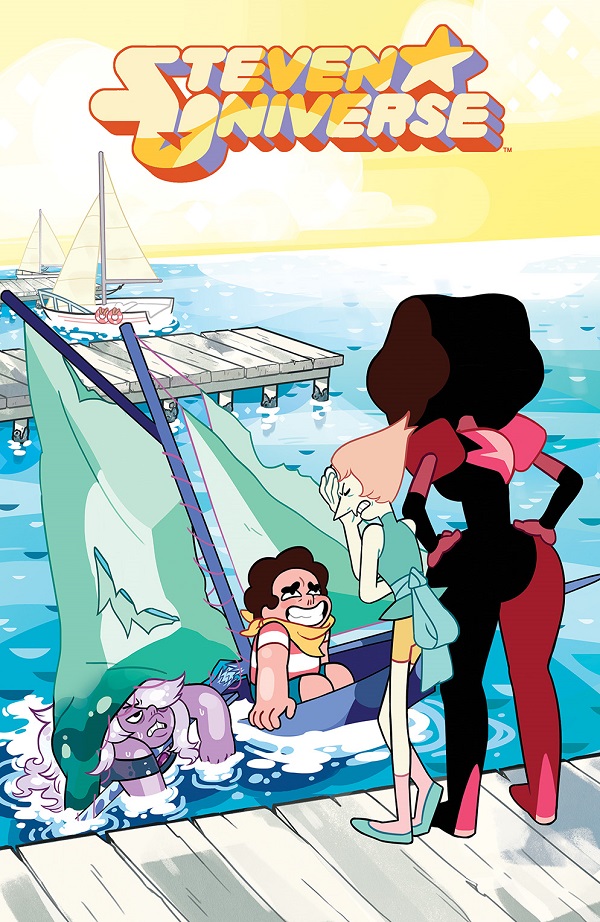 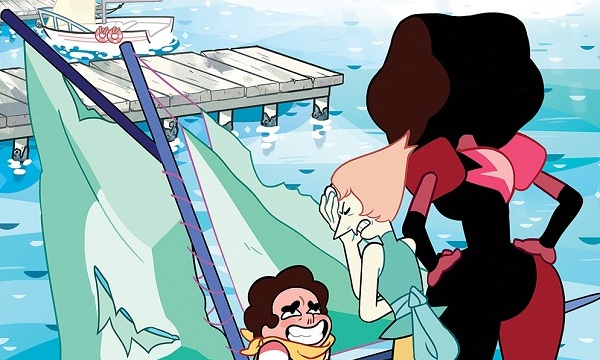 Steven Universe #3 turns the focus on to Greg Universe, Steven’s father, as he enters an Open Mic Night. Steven and the Gems are in pursuit of a sound eating gem monster when it turns its sights on Open Mic Night. Also in this issue are two back up shorts detailing Steven and Connie in Greg’s massive storage locker, and another short about Steven and a disco mirror ball.

Steven Universe has an inherent charm about it. It isn’t over the top like Adventure Time or Uncle Grandpa or about finding the weirdness in the most mundane things like Regular Show or Wonderful World of Gumball.  Instead, Steven Universe finds this middle ground that gives the show and comic a unique voice. It will focus on fighting giant monster gems and be this action-adventure story then the next moment it is a subtle story focusing on the characters and their emotions. Steven Universe #3 is a microcosm of the series.

The issue features a giant battle with a massive manta ray gem that devours sound but instead it focuses on Greg Universe, a washed-up failed musician that owns a car wash, as he tries to spend time with Steven as he prepares to defend the world. Jeremy Sorese finds the emotion in the story and captures the feel of the show. The portrayal of Greg was interesting. He really is a well-intentioned man that cares for his son. Somewhat dimwitted but caring father nonetheless who still misses Steven’s mom to this day.  Sorese understands that and showed it well. Sorese did find the voice for the other characters as well, but the focus on Greg was great since he usually doesn’t get the focus on the show.

The art from Coleman Engle was spot on. Engle knows how to have his characters “act.” The emotion of the writing would be nothing without Engle selling it. Tasked with not only carrying a subtle emotional story, Engle was also tasked with drawing a comic that focuses on music, which is nearly impossible to do in a silent medium such as a comic. Engle knocks it out of the park. The music is given the gravitas that is needed to show the emotion behind it. The decision to use Steven’s mother and subtle facial impressions show the inspiration behind the music Greg is playing. It was quite effective.

The credits don’t list a letterer and I am going to assume it was done by Engle.  Lettering is an underappreciated craft in comics. It can convey many key components of effective story telling. Often lettering is done in a solid level and doesn’t get mentioned. Sometimes it is done so poorly that the reader notices and takes them out of the story. Yet, there are times where the lettering is done in a way that is noticeable but not for the poor quality but for how effective it is for capturing tones, emotions, and impact of the dialog. The lettering in Steven Universe #3 (in all stories so not just for Engle, but also Fenton and Rupert) is top notch. It is something that shows what lettering can do for a story. There are times that Rules of Lettering are broken, but it isn’t the rules that make a comic but how you work the rules. The rules are broken in ways that help the story and carry the narrative along.

The two back-up shorts in Steven Universe by Josceline Fenton (Storage Wars) and Mad Rupert (Disco) are short and sweet stories. The writing is brief but charming in how well they capture the heart of the characters featured. The art provided some fun moments and was kinetic. More long form work from Fenton or Rupert on Steven Universe would be great if only to see them stretch their legs and show what they’ve got.