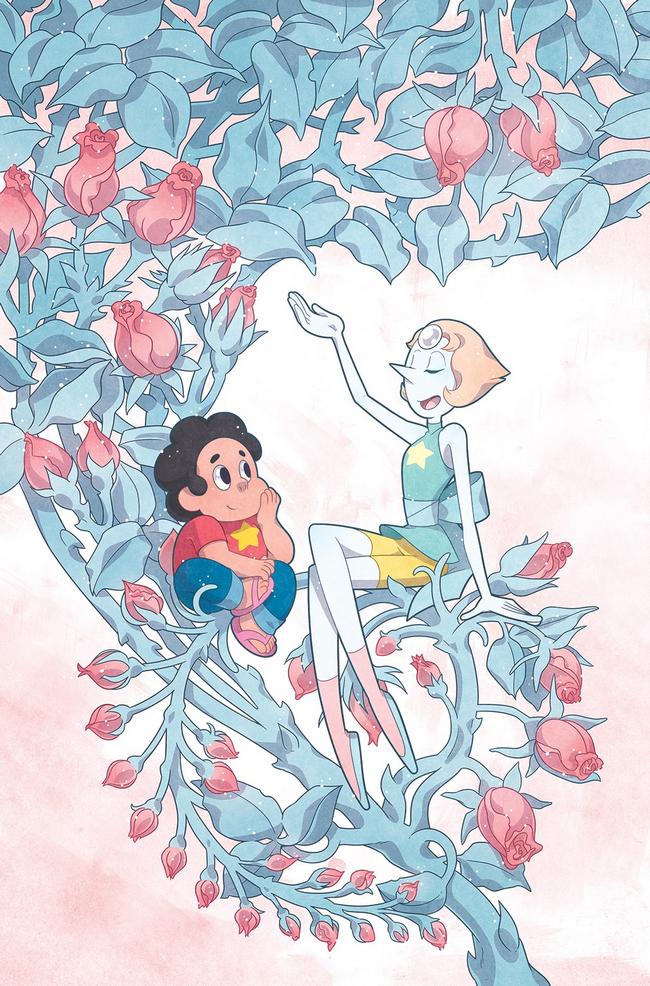 It’s Ren Faire time! Steven and Amethyst introduce Peridot to a new side of Beach City and she is not that enthusiastic about it. However, that changes when she gets to behold the spectacle of a jousting match. Though Peridot finds out an upsetting secret about her favorite activity at the Faire, it gives her a chance to talk about her adjustment to her new home (and it gives Onion a chance to be Onion).

If I had my way, every filler-y episode of Steven Universe would instead find a home in the comic, mainly because I’m still dying to know what happened to Pink Diamond. The fact that this series is able to work with the charm of Beach City and further develop its characters is demonstrative of its importance regarding the entire mythos of the media. These largely insular installments thus far give readers a new, small, but still vital glimpse into the lives of each focal character.

Melanie Gillman has built this issue’s story around Peridot. Steven, Amethyst, Onion, and others (including Barb!) are present, but they are not quite the agents of the story. Peridot as the protagonist gives us a chance to view her decisions and feelings with startling clarity. Gillman’s storytelling departure in this issue is an expert choice in that it is necessary to fully examine our main character’s behavior, something which may have been more difficult if there was more focus on secondary characters to this issue.

Katy Farina introduces a new dimension to art through the jousting scene of this issue. Within a small number of pages, the level of tension is effectively conveyed through dramatic lines and perspective. Looking back to previous issues of the series, action takes a back seat, to no detriment of the story, so to find it here creates a wonderful context which makes these scenes more effective. Peridot’s expressions, from wonder to excitement, interspersed through the first jousting match, heighten feelings and provide a narrative contrast to the build-up of the issue. Farina is on point with the whimsical flair of Steven Universe.

What I find interesting about Whitney Cogar on issue four is that there seem to be less colors used this time. The scheme can be broken down into light range primary and secondary colors. What’s most noticeable about Cogar’s work is that it’s built to bring attention to Peridot. Even among adjacent hues in the color wheel, her green presence continually draws the eye, while other panels with color contrast don’t have the same level of emphasis or distinction. Such elements help drive home the main thesis of the issue, Peridot’s emotional awareness, and I don’t feel this integral part of the story would have had the same level of power without Cogar’s skills.

Mike Fiorentino on letters is a good fit for the series because they are light and playful, but in this issue the lettering truly shines. Almost immediately, you can catch the differing beats of dialogue in Peridot, Amethyst, Steven, and each character in the story. Peridot’s speech is particularly effective with Fiorentino at the helm, demonstrating her penchant for emotive, eager, and sometimes agitated communication.

I feel like there are things that Steven Universe is supposed to be, but in the most charming of ways the series challenges me to think differently. All of the characters thus far are familiar, yet the tiny, endearing twists on their lives make this comic enjoyable and rather unexpected. The fourth issue explores the reality of Gems still being alien, even the relatively Earth-adjusted Amethyst, and why that matters for Peridot. The creative team puts a lighthearted touch on the series while also demonstrating truly stellar technical notes in plot, illustration, color, and lettering. Steven Universe is a marvel and a gift and there are no signs of that stopping.