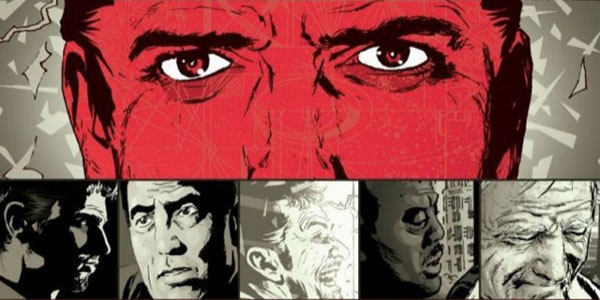 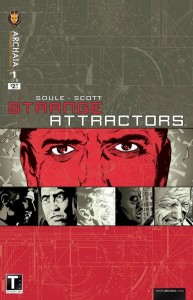 Archaia Entertainment’s Strange Attractors is the sort of book we used to see from Vertigo in the 90s. Heller Wilson, A graduate student studying complexity theory, seeks out the mentorship of an aging professor. Heller discovers that this professor is not only mapping the chaotic system of New York City, he has been making subtle nudges to events and people to keep the system going.

Soule has a bold story to tell here. Chaos Theory has entered the pop culture (sometimes even accurately) in films such as The Butterfly Effect and Jurassic Park. I give Soule credit for not dumbing down the science here. He unpacks it for the reader without resorting to cliché examples. His lead characters are experts in the field and this shows in the way they react to one another.

It isn’t an action book, it’s a heavy but quickly paced read. There is a large amount of exposition but it is all in service of getting the reader up to speed with the world we will see explored in this serialized graphic novel.

The art by Greg Scott is just the right mix of detail and style. Scott makes the world concrete for the reader while show a bit of the magic at work in math of this level. Scott does natural movement quite well. There are no fight scenes or car chases here and Scott still manages to keep a feeling of movement, varying the framing to avoid the static-ness that can come with long dialogue scenes.

The colouring by Art Lyon and Matthew Petz deserves special attention. They set the tone for the book with their choices and in a book with many talking heads, the colouring helps keep the art from developing a monotony. This team has one really fantastic spot on pages 4 and 5 as we see complexity theory in practice.

I highly recommend this first chapter in Strange Attractors. I’m very intrigued to see what will happen next. I expect Heller will find that the system he seeks to study may already be including him in its patterns. It can’t hurt the sales that rumours Soule will take over Swamp Thing hit the day the debut issue was released.