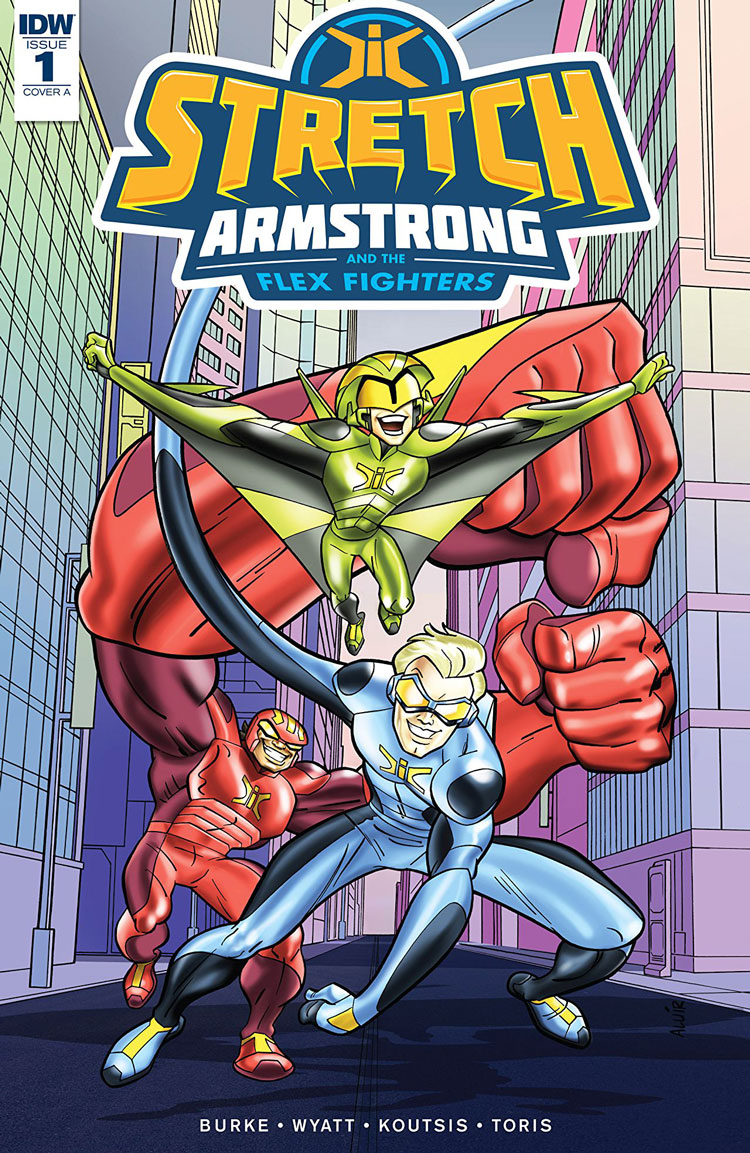 My task: to review the comic book tie-in to a show I’ve not watched, based on the reboot of a toy I have never even seen in real life.

I love a challenge.

We are told in an editor’s note that this story takes place before episode 108 of Stretch Armstrong and the Flex Fighters (which we are further told is streaming now(!) on Netflix). So if you are a continuity fiend for the Armstrong-verse, this will give you a place to stand.

Three high school friends are exposed to an experimental chemical and get incredible powers. They become a team of superheroes, the Flex Fighters, under the code names Stretch, Wingspan, and Omni-Mass.

In this adventure, the Flex Fighters go up against an insect that has been exposed to the same chemical. In the middle of this, Stretch laments his over-scheduled life.

I am reticent to use the term “fun” when reviewing anything, given that it is a relative term based on innumerable variables specific to us as individuals rather than an objective term. In doing some research for this review, I found an academic study of “fun” as it relates to playing youth sports. Given that this study is about a team sport and I am reviewing a comic that is meant to be read by an individual, I did not find it that helpful. Further research for an objective definition was fruitless.

But at the risk of a definitional challenge that I cannot properly defend, I’ll go out of on a limb and say it’s pretty fun.

Koutsis has a style that fits well with the tone. I suspect it is in the style of the animation of the series, but I was too busy reading academic journal entries about soccer to check. The action is frenetic but clear, the characters clearly defined in crowded panels.

Toris’ colors have some interesting choices, often muted on everything but the three lead characters. The primary colors of their costumes pop off the page. The predominantly red, green, and blue costumes are a treat in the chaos.

Wait, is green a primary color? Now that I think about it, it’s a secondary color.

The lettering by Miesner adds subtly during the action scenes. Using bold, larger fonts, and a subtle italicization of key balloons, Miesner puts extra emphasis and drama into this sections.

The only odd part of this issue is the curious placement of an extended flashback. In dialogue reminiscent of a early Spider-man narration, Stretch is lamenting during the battle about being over scheduled by his father. This leads to a five-page flashback (fully 25% of the total issue) of Stretch remembering an event in his younger days while the battle is still going on.

The passage does raise the shadow that hangs over Stretch’s life, the death of his mother and the uncertainty and regret that must hold for both Stretch and his father. There is tension between them as Stretch’s father pressures the teen to stay active at every moment. Stretch’s costumed responsibilities appear to be a secret from his father. Perhaps the elder Mr. Armstrong is compensating for this loss by being over protective. Or perhaps Stretch himself is reluctant to confront his father.

Regardless, the team continues to fight the giant preying mantis while Stretch makes a phone call.