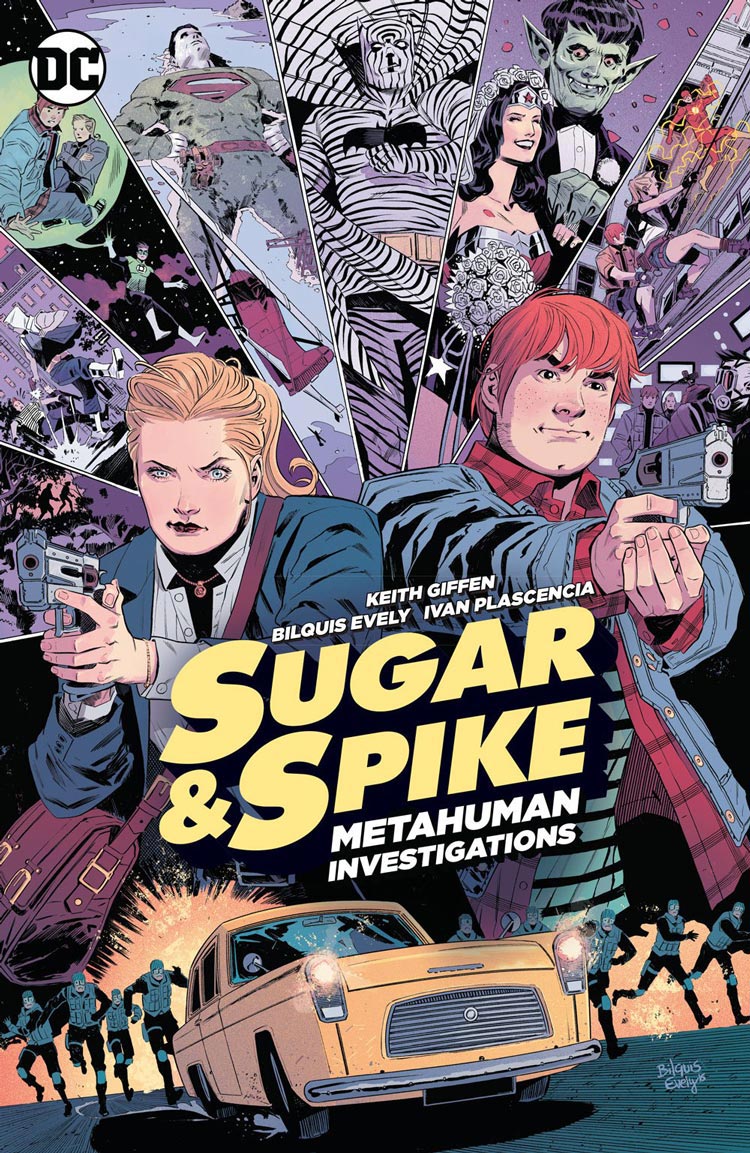 Long out of diapers and still getting into trouble, Sugar and Spike are back — and taking the cases no one else is qualified for. Yes, that’s right. DC Comics’ most famous babies are the newest detective team gracing the pages and they’re out to unearth — or protect — the biggest, silliest secrets of the DC Universe for the most powerful heroes around! Ever wonder what happened to Batman’s crazy outfits? The Green Lantern’s best friend? Wonder Woman’s husband?!?! Sugar and Spike will dig up the answer!

There’s a lot of nostalgia going around these days in the halls of DC Comics, but almost uniformly, when it benefits the story, it’s about adding to and not repeating what was great about the past. It’s about finding those threads that tugged at people’s hearts once upon a time and turning them on their heads to do it all over again.

Honestly? With that in mind, this volume could easily have been titled, “Sugar and Spike: Rebirth.”

But it’s not just the craziness of taking DC Comics’ two most famous babies (hmmm, were there others?) and making them into a Moonlighting-style, private detective team. What’s really so fun about this series is the reflexive look at some of the comic company’s most out-there stories.

Wonder Woman marrying a space alien? Yup, it almost happened. Superman building an island that looked just like him to store kryptonite on? That sounds smart. The Legion of Super-Heroes constantly mucking around in the past with no ill effect? Well… maybe.

Sure, readers could look into the past and dismiss these stories as childish, but that’s not what writer Giffen (who’s no stranger to writing madcap stories of his own for the DC Universe) is doing here. If nothing else is true, Sugar and Spike is a love letter to a bygone era, but not at the expense of modern storytelling. With these six stories, Giffen, Evely, and Plascencia blend a respect for the past with narrative that feels smart and contemporary.

Take Sugar and Spike themselves. Giffen plays them off as snarky best friends, without playing too far into the trope of what happens when a man and woman work closely together. Wink wink. No, actually, the duo work so well as the very oldest friends, who have a lot of implied history, but still a fair share of things they don’t know about each other, particularly about Sugar.

More than any other character, Sugar stands out early on as a stoic figure, your classic gumshoe, but evolves over the course of the volume to illuminate what drives her and what secret love she has for the work they do. Evely’s rendering of Sugar with sublimely subtle expressions really elevates the narrative Giffen lays out for her, adding this layer of wonderful insight into a character who could easily have fallen into stereotype otherwise.

Evely and Plascencia’s treatment of the relics of past stories — from weirdo costumes to the arrival of multiple time machines — helps the entire volume ride this line between four-color super-hero adventure and true detective stories. The palette Plascencia employs definitely reflects the sense of the latter much more, keeping Sugar and Spike’s environment feeling simultaneously contemporary and reflecting that yellowed, faded page so many old comics in the quarter boxes have developed.

And Evely’s work on this series is simply beautiful, grounding the narrative on the ground with the “normals” like Sugar and Spike, making some of the guest stars like Flash, Wonder Woman, and Green Lantern seem awkwardly out of place. The one exception seems to be Supergirl, who in this era feels the most “girl next door” of any of the heroes of her era. Evely’s work rendering the Girl of Steel, particularly in contrast to the presumed sharpness behind Sugar’s visage, just shines.

A fun, smart, and reverent reimagining of not just two characters, but DC history as a whole, Sugar and Spike is a must-buy for anyone enjoying Rebirth, fans who want a sneak peak of what kind of glourious work Bilquis Evely will be bringing to Wonder Woman, and for longtime Keith Giffen readers, who just want to share his glee for days gone by — and move into the future with him as well.