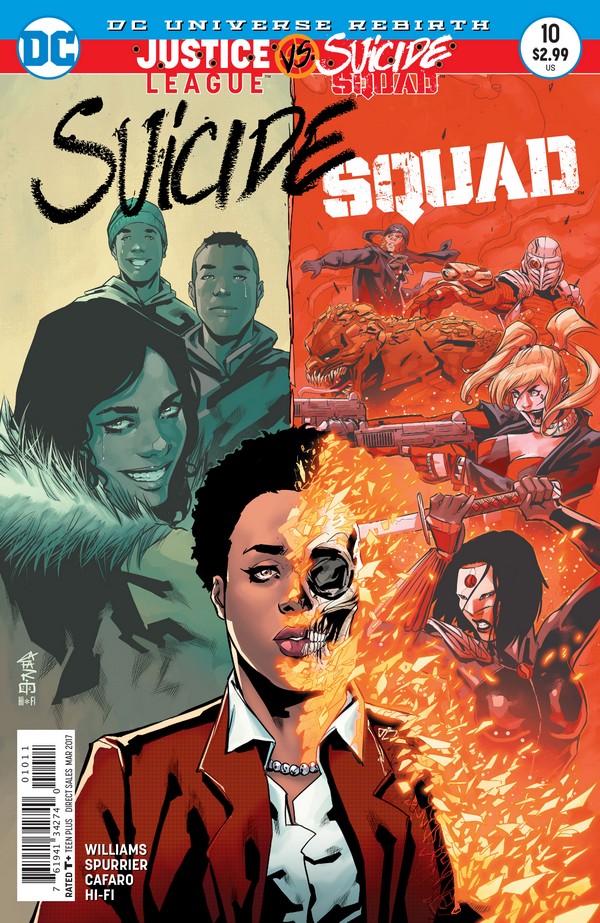 The epilogue to Justice League vs. Suicide Squad. Amanda Waller tries to fix some of what she’s broken after Max Lord unleashed the original Suicide Squad on the world.

This issue follows one of the loose ends from Justice League vs. Suicide Squad: Rustam, who served as the Rick Flagg analog on the original squad. Rustam pursues revenge on Waller in a highly Waller-esque way: By threatening Waller’s family. It opens with him launching a single-handed raid on a nuclear silo, just to leave a message that only Waller would understand: A picture of her children.

The focus of most of this issue is on Waller and her relationship, or lack thereof, with her family. We get hints at Waller’s past and a somewhat better sense of her hidden depths and the tragedies that may have motivated her to become the calculating, cold-hearted puppetmaster we’ve come to know. And, in the end, Rustam gets his revenge in the most cruel and fitting way possible.

Amanda Waller can sometimes come across as one-dimensional, ruthless and inhuman. This issue exposes the all-too-human fault at her core: She’s confused a means for an end. Tragedy led her to dedicate herself to doing anything to protect her family, a mission with which she’s become so obsessed that she’s wound up losing her family. That humanity, and those human failings, are at the core of the best Amanda Waller stories, and it’s great to see this creative team picking that aspect up and running with it in a way that largely hasn’t been done since John Ostrander’s original Suicide Squad.

Also noteworthy are the reactions of the various members of the Squad. Captain Boomerang, the consummate dirtbag, is eager to listen in on the family drama. Harley Quinn, by contrast, seems deeply affected by Waller’s situation. She ushers the other Squad members away when voices are raised and offers Waller comfort at the story’s end. It’s a small touch, but it really adds depth to the characterization and our sense of the team’s dynamic.

The art does a great job adding dynamism and interest to a story where the action scenes are relatively perfunctory and the real drama is in a conversation with family. Flashbacks and cuts to action are deployed strategically to break up the conversation, and Cafaro does an excellent job conveying emotion in the various characters’ facial expressions. Waller’s face, in particular, stays stoic and unemotional for most of the issue, making it all the more powerful when it becomes caring, pleading, and, finally, defeated. Hi-Fi’s color work suits the story, though it’s somewhat unexceptional.

Suicide Squad #10 is a well-told done-in-one story spinning out of the denouement of Justice League vs. Suicide Squad. It builds on the event by telling a character-focused story that deepens our understanding of Amanda Waller.