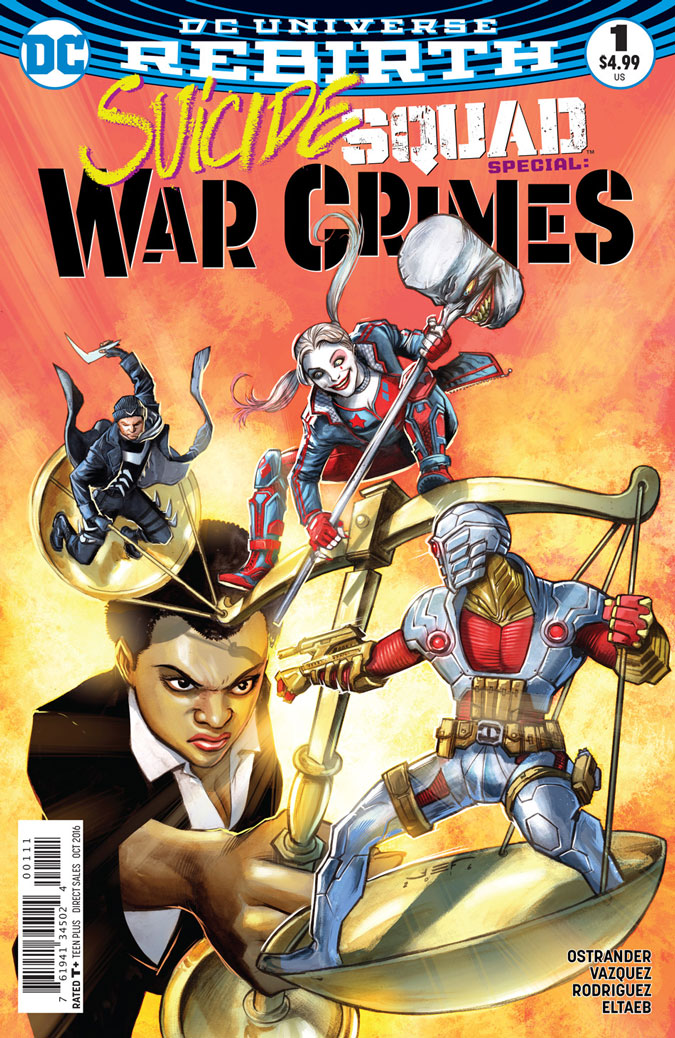 A man accused of war crimes and taken into custody by the Hague. Problem 1: he’s kidnapped on American soil by European meta-humans. Problem 2: he used to be the Secretary of Defense of the United States. Problem 3: Sending in a ragtag team of super-villains to kidnap him back is the best idea the government has to keep its secrets secret.

In what is ostensibly a primer for the concept of the Suicide Squad — and a ripped-from-the-past story I could easily slot into my long boxes of old — John Ostrander returns to the title he made famous for a one-shot special entitled, “War Crimes.”

It’s a shame, really, that this story is all that’s on the docket for Ostrander and the Squad right now, because in terms of fully embracing the concept, he’s aces once again. A lot of writers forget how grounded in real world politics the original series was. With its literal start in the pages of Ostrander’s Legends series, the Squad was born right at the feet of Ronald Reagan in the Oval Office. And it never slowed down from there.

From neo-Nazi hate groups (sounds familiar) and Middle-Eastern freedom fighters to drug cartels in South America and Russian prisoners of conscience, Ostrander’s Suicide Squad took it all on. And not metaphoric versions of real problems cloaked in comic booky tropes, but real international concepts that the United States conscience was grappling with.

And so too here does the writer roll out something that many liberal politicos whisper about (and some at not so much a whisper) through the latter days of the Obama administration: war crime culpability from the previous American administration. Ever wonder why George W. Bush is so reclusive? I’d worry about international travel after what happened in Iraq and Afghanistan too.

Ostrander sets up a classic game of chess with the squad taking control, infiltrating, and coordinating an escape by the skin of their teeth, as always. If there’s a flip side to the gleeful classic nature of the story, it’s that in some ways, it mirrors the earliest issues of Ostrander’s first run so much, it loses its unpredictability.

Instead of a Middle-Eastern terrorist cell, it’s a European one. The character no one ever heard of before this mission is the one whose head gets blown off. And the problem gets resolved in a way that mirrors one of the most poignant moments in Ostrander’s original run.

Vazquez’s art is clean and simple, handling action scenes — particularly those involving motorcycles in action — with great movement and flair. But for the rest of the issue, his work feels a little too clean to be illustrating this kind of clandestine, rough-house mission. There’s little edge to his work, and Eltaeb’s bright color palette does the content a bit of a disservice as well.

When the crowning moment of violence happens, it takes a second look to get the full effect because it seems so banal a scene. And part of that is the lack of mood and build-up of tension in the pages previous.

All in all, War Crimes is a comic I’d hand anyone interested in seeing a quintessential take on the Suicide Squad, assuming I couldn’t put hands on my original issues. Where the book lacks a bit of depth and fresh nuance, it makes up for it in reminding me just how special John Ostrander with his hand in the Squad really is. Let’s get more from the man and these characters, stat. I’m dying to dive back in all over again, and I doubt I’m alone.