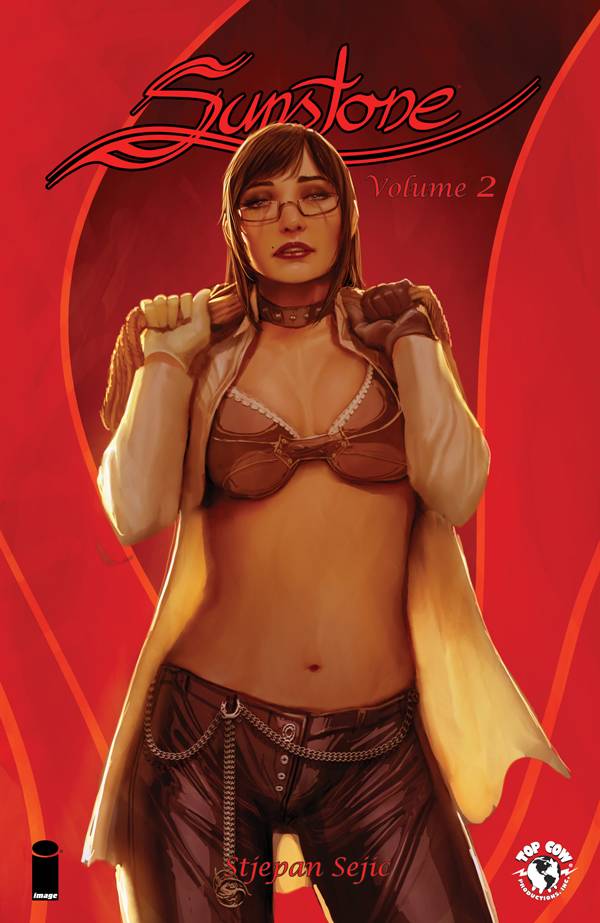 While the first volume focused almost entirely on Ally and Lisa, volume two pulls back to also take a look at Ally’s past, as well as highlight a few new characters and their dynamics with each other. Unfortunately, opening up Sunstone’s world for a better look also puts the spotlight on some of Sejic’s shortcomings as a writer, with repetitious dialogue and clunky, almost uncertain narration boxes hampering the story’s flow. A good portion of the book is devoted to the revealing of Ally’s biggest regret, and while Ally’s self-repeating rambling can be justified by her discomfort, a cluster of friends detailing almost the exact same account just outside the door feels both unnecessary and like a missed opportunity, as their conversation offers little additional insight. And dialogue often reads overly formal, overwrought and allergic to contractions.

Sejic’s art style beautifully carries the varied levels of detail that the book ranges through, from thick-lined, scribbled penciling with lovely hodgepodged paint-styled colors, to hyper-realistic illustrations detailed in rich, smooth brush strokes of color, and everything in between. Despite inconsistent levels of detail, the visuals never feel jarringly different, the occasional panel featuring more lifelike art working as moments of importance rather than shoehorned additions. Sejic’s style is wonderfully, consistently “messy,” particularly when it comes to shading and highlights, and is a perfect fit for a story about people and sex.

And oh boy, the sex. It’s an unquestionably sexy book. The stunning, uniquely-designed outfits and gear are hot and creative, and Sejic isn’t shy about showing them off. Likewise, sexual scenes are scattered throughout, tantalizingly non-graphic but explicit enough that readers will likely keep this series at home. Sejic is an equal opportunity sex appeal artist, because while the story focuses mostly on Lisa and Ally, Ally’s best friend Alan gets a few sensual moments of his own, both as a submissive and a dominant. And while there’s plenty of sexy imagery to be had, it never feels objectifying – characters retain their agency as most sex scenes are also about characterization establishment and mutual pleasure, and even background performers at a club get a subsequent scene detailing their personalities and motivations. Sejic’s mastery of body language and sultry posing, as well as his sharp eye for how to work each panel’s camera angle for maximum emphasis both sexual and emotional, only adds to the book’s visual appeal.

The page designs in Sunstone are works of art in and of themselves. Though sometimes looking almost too ornate, some pages receive extra detail work around the panels, often shaped into rope work. And the panels themselves are widely varied, sticking to routine rectangles for more straight-forward storytelling and breaking into various shapes to better-suit page-length focal illustrations when necessary. Sejic likes putting emphasis on expressions through frequent close-ups of faces, and shows off his characters’ costumes with tall, full-length shots. It works perfectly with his art style.