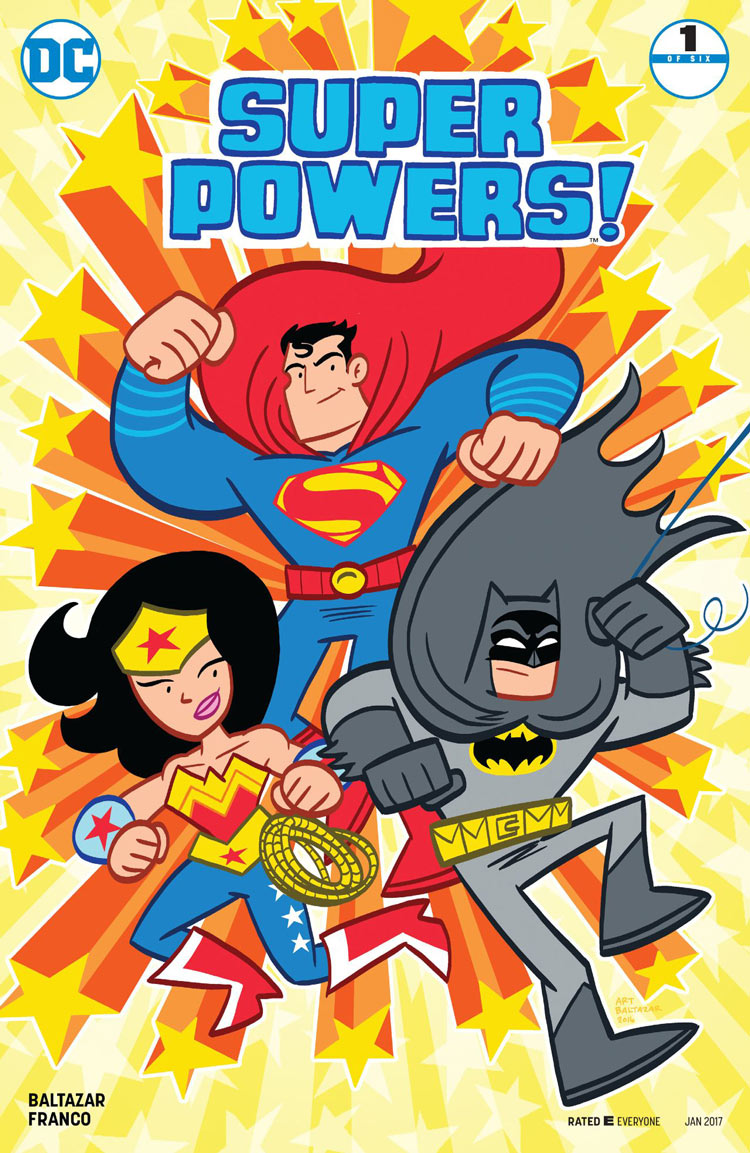 Comic collaborators Art Baltazar and Franco Aureliani return to the whimsical version of the DC Universe they crafted through Tiny Titans and Superman Family to rejuvenate the Super Powers brand as an all-ages friendly take on DC Comics’ trinity of Superman, Batman, and Wonder Woman.

Not content (or, perhaps more likely not capable) of restraining themselves, Art and Franco bring in Commissioner Gordon, Brainiac, Riddler, Penguin (and his penguins!), and more, including a character that also appears in Tom Scioli’s (decidedly-less-all-ages-friendly) Super Powers strip that’s running in the back of Cave Carson Has a Cybernetic Eye.

It’s a fun read, start to finish, but then again, what have we come to expect from Art and Franco?

How about playful art, bright colors, charming characters, and youthful enthusiasm? Yeah. We’ve come to expect that from these guys, and they certainly deliver in Super Powers #1.

They also give us the opening chapter of a multi-part story subtly masked by an apparent done-in-one adventure. Super Powers #1 has a very distinct beginning, middle, and end. The characters follow an arc, and the story presents a threat, proposes a solution, and follows up, tugging out subplots for future issues.

All the while that Baltazar and Aureliani are constructing the story, they’re also playing with the Trinity, taking them from their own familiar settings and dropping them into other settings that are still familiar to the readers, but offer intrigue and opportunity for the storytellers.

Discerning readers might catch the continuity links from previous Baltazar and Aureliani yarns, but let’s be serious here: no one is reading this for continuity. We’re all just reading it for fun. If Super Powers #1 is anything to judge the future of this series by, this is going to be one fun adventure.

Super Powers #1 is exactly the type of lighthearted, but sincere, escapism most comic book readers originally latched onto comics because of or in search of. This is the type of story where anything can happen, but, in this case, that “anything” isn’t mayhem, mutilation or murder.

No, the “anything” that could happen in Super Powers #1 is fun, frivolity, and fanciful. Lex Luthor can live in a Kryptonite fortress, Superman and Commissioner Gordon can get along, Metropolis can be across the bay from Gotham and the John Hancock Center can appear on the same skyline as the Daily Planet. It’s all in the name of fun, and the fun just so happens to have some of our favorite comic book characters involved.

If the comics you’re reading are bringing you down, or if you need a nostalgia booster shot, give Super Powers #1 a try. I’m pretty sure you’ll be joining me in saying, “Aw Yeah!” when the next issue comes out.