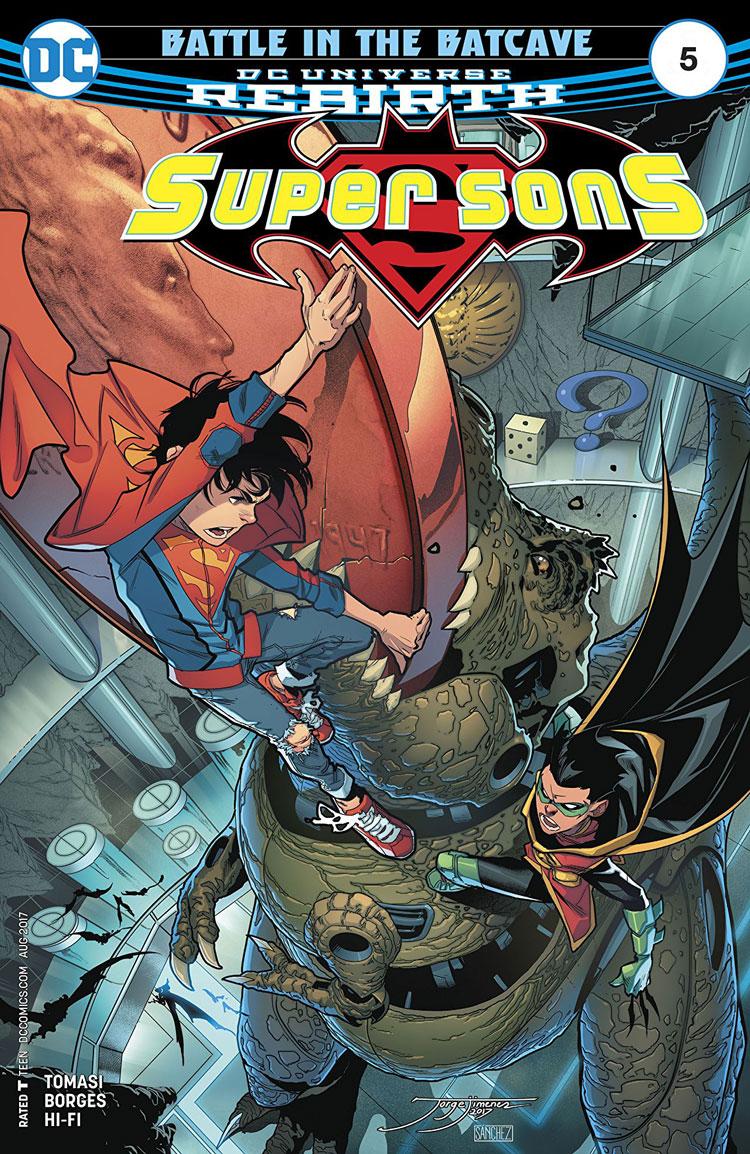 After the Super Sons’ near deadly battle with the psychotic Kid Amazo, Damian and Jonathan find themselves grounded. But after life changing news from Jonathan’s parents, the boys find themselves entangled in another fight with each other in this exciting issue of Super Sons!

Tomasi depicts two foils within his mains which are captivating to watch interact. While I may have a slight bias towards the super-villain personality trapped inside a very short sidekick which is Damian, Jonathan takes over this issue. Jonathan may be a half-Kryptonian powerhouse, but he’s still a child, and has fears of change and reacts poorly to normal problems he can’t punch away.

It feels a bit laughable that Jonathan would complain about such normal things to Damian when Damian has definitely gone through an abysmally worse childhood, but I’m sure Jonathan probably doesn’t know that. It’s fun to see the two interact and bicker like brothers, though, and I’m excited to see how they impact each other as they work closer together in the future.

While I will miss Jorge Jimenez and Alejandro Sanchez’ art, I welcome the shift in style brought in by Borges and Hi-Fi. Borges’ brings more disgruntled looking characters, with more frustrated eyes and more animated faces. I love her face work, from the bored face Damian has in the first panel to the annoyed look on Jonathan as Damian pokes his face. Her work brings a level of angst to the panel, but not the boring, mopey angst that you may get from an emo song. No, this is an edge of rage and incredulousness that adds to the tone of the comic, and I appreciate that sort of angst far more.

Hi-Fi’s coloring, as always, is splendid. The brightness of the comic almost juxtaposes the mood now, the romp-y feeling becoming more of a teen drama like the Teen Titans through the art. However, the juxtaposition works well in cutting the seriousness and adding a shade of levity to the comic. Even the dark nights of the dreary city of Gotham seem brighter, and it works here. It’s needed.