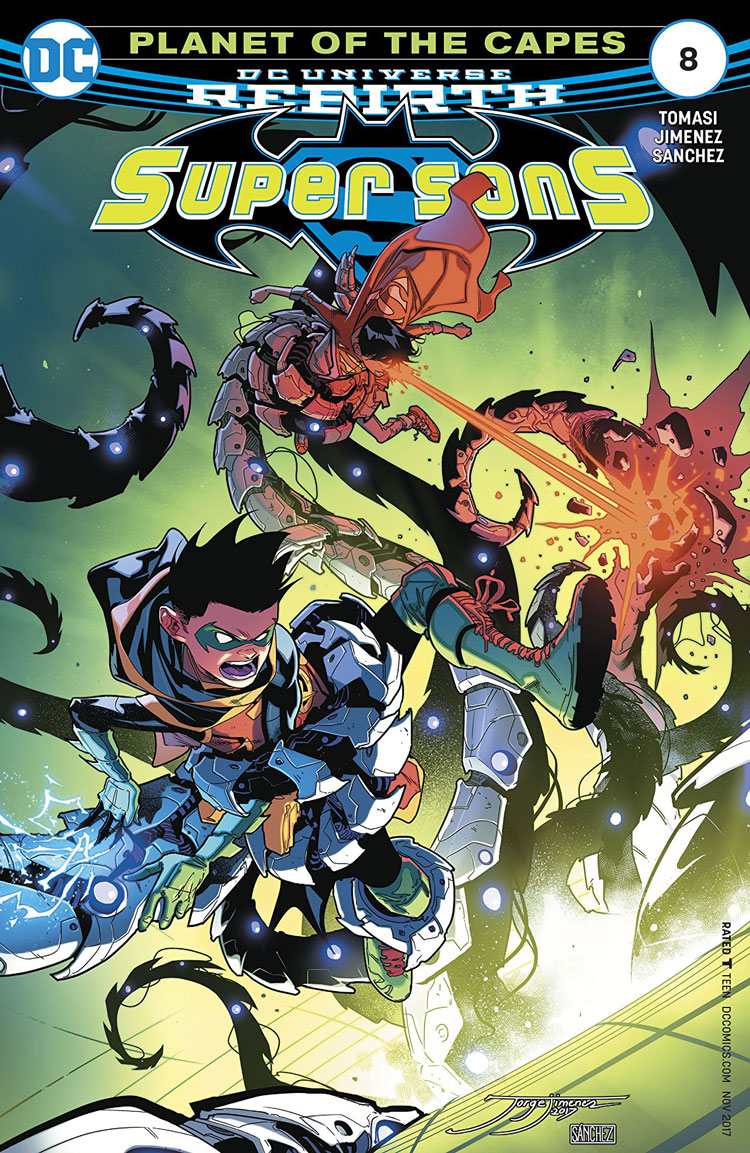 Jon and Damian are in the clutches of a living planet until two timely young women help them escape. Hard Line and Big Shot hail from a world forgotten and consumed, their lives constantly at risk from their current home. The Super Sons try to piece together the mystery, only to find themselves in quite the pickle.

Peter J. Tomasi has proven to be adept when writing this super-duo. Damian and Jon’s personalities are a constantly interplay of comedy without losing the spirit that drives the series. This time, Damian being the butt of many a joke is hilarious, almost functioning like a storytelling reprisal for his treatment of Jon.

Tomasi’s writing of the half-Kryptonian gets at his budding detective skills. They do not operate the same way as Damian’s penchant for investigation, but they do mirror a significant moment in the plot. Jon pieces the story and the mystery together in a way that works with his innocence and curiosity compared to Damian’s arrogance when adding things together.

Jorge Jimenez style is fluid in each page, catching the chaos of the opening scene and bringing out each character’s spritely nature. Through exaggerated expressions and movements, Jimenez creates visuals which combine drama and youth. Thus, we are able to view Jon and Damian’s adventure as one that is full of wonder but also dire straits. Added to this effect is Jimenez’s penchant for visual deconstruction, breaking down objects to enhance action.

Alejandro Sanchez’s dark, muted tones emphasize that the boys are lost in many meanings of the world. As they are trying to figure out the particulars of their circumstances, there is a lack of vivid colors and brightness, playing on elements of the plot such as grief and confusion. They and their companions are in a place disparate from their origins, and much of that is shown through Sanchez’s colorwork.

Big Shot’s recollection of Eoroe makes me long for more things like it in comics. These pages are excellently constructed, visually representing a mindscape with cascading panels. However, there’s something about the narrative of this world in the context of Super Sons. It’s told through two black women and is represented as a vastly diverse world with a similar framework as the DC Universe. However, this narrative hits on themes of being conquered, being prisoners forced to fight for survival with regularity, which has a slightly different context when it is represented by women of color.

This aspect of the issue was a reminder that many times marginalized folks’ stories have similar themes across a medium which maybe should be traded in for different ones. All in all, I love the inclusion of these characters, but such a feeling is bittersweet knowing that they may not stick around past this arc and that their wonderfully colorful home is but a memory rather than a world fully realized.

I appreciate that Super Sons #8 feels like a comic that gets to exist on its own terms. The story feels independent, capturing the same interdimensional elements which DC is known for but allowing them to develop in the context of Jon and Damian.

As always, the youthful exploits of the Sons help us see who they are as heroes, people, and characters. The secondary characters to the story are amazing, too, and I am lowkey crossing my fingers that they continue to show up. Even if a narrative emerges that maybe should be phased out, this issue is another solid entry to the series.