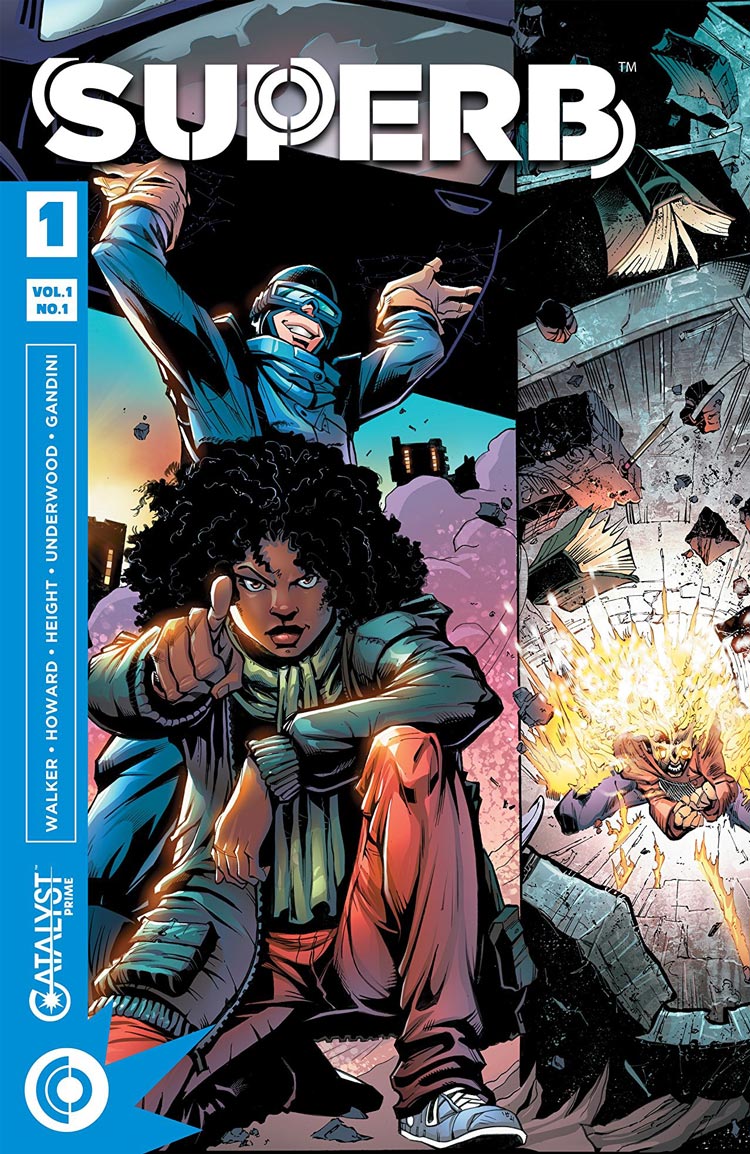 Enhanced people are being carted off after The Event and life still sucks for Kayla and Jonah. Amidst public fear of super-powered individuals, a new hero has risen up, becoming an internet sensation. As these two friends learn to manage their own lives, the world changes around them.

Superb #1 thrusts readers into the world of Catalyst Prime, allowing us to see just how shaken the world has become after The Event. You can feel the tension and fear as the characters and their entire environment are learning to adjust after something so catastrophic.

The focus on Jonah and Kayla brings these feelings into the realm of turbulent adolescence, where teenagers are just trying to get by without setting off metahuman detectors. Despite the strong focus on these characters, this first issue does feel like pieces are missing, as the two primary threads of the story don’t seem to have a strong connection.

David Walker and Sheena C. Howard combine efforts to build another corner of this mythos. The slow build doesn’t quite help the story, though there are subtle nods as to what will follow. Walker and Howard’s strength is in how they cast Kayla and Jonah, two childhood friends reunited in this new part of their lives. Both of these characters are evidence of a good step forward for this comic and its publisher Lion Forge, because of the spotlight given to a boy with a disability and a Black girl.

Jonah in particular feels like a more fleshed out character than what we typically see in comics when an underrepresented group is being written. Walker and Howard worked with the National Down Syndrome Society in creating him, which I feel is evident from the beginning of the story. He faces bullying, which Kayla attempts to protect him from, that hones in on his having Down Syndome.

The ableist slurs thrown at him are not his one note in the story, however, and we get to see his home life and how he deals with social interaction. With his foray into heroics, we will get to see different parts of Jonah, and important facet many people miss when marginalized characters are being written.

While the art is good for reflecting teenage angst, there are some aspects of it which detract from the plot. Ray-Anthony Height’s pencils are well-suited to address the brimming emotions of a fear-filled environment. Every image is wrought with friction and conflict, and they provide a great parallel for the narrative we see through the main characters.

Yet, some of the facial expressions seem inconsistent between characters, while others don’t fully register the emotional tone within the comics. Kayla, for one, appears to be wildly different people and there is less cohesion in the visual representation in her emotions, something we also see in other figures.

Le Beau L. Underwood’s inks are heavy, again working within a narrative tone that speaks to the discord that permeates these characters’ environment. Veronica Gandini’s colors take this technique a step further with dark ranges of color throughout the issue. Every instance of brightness is not for the purpose of making the comic lighthearted; instead, these colors capitalize on the bleak reality each of the characters exist in.

Superb #1 introduces us to characters face not only adolescence, but a world where being powerful means being marked. With diverse leads and storytelling that gives them a chance to be fully realized, this comic is an important example of how to push comic storytelling forward. Elements of the art don’t quite jive with the story, but it is still one which takes sensitive issues regarding characters and puts them in a reality which addresses parts of our own. The Catalyst Prime universe has a lot of promise and Superb is yet another example of that.