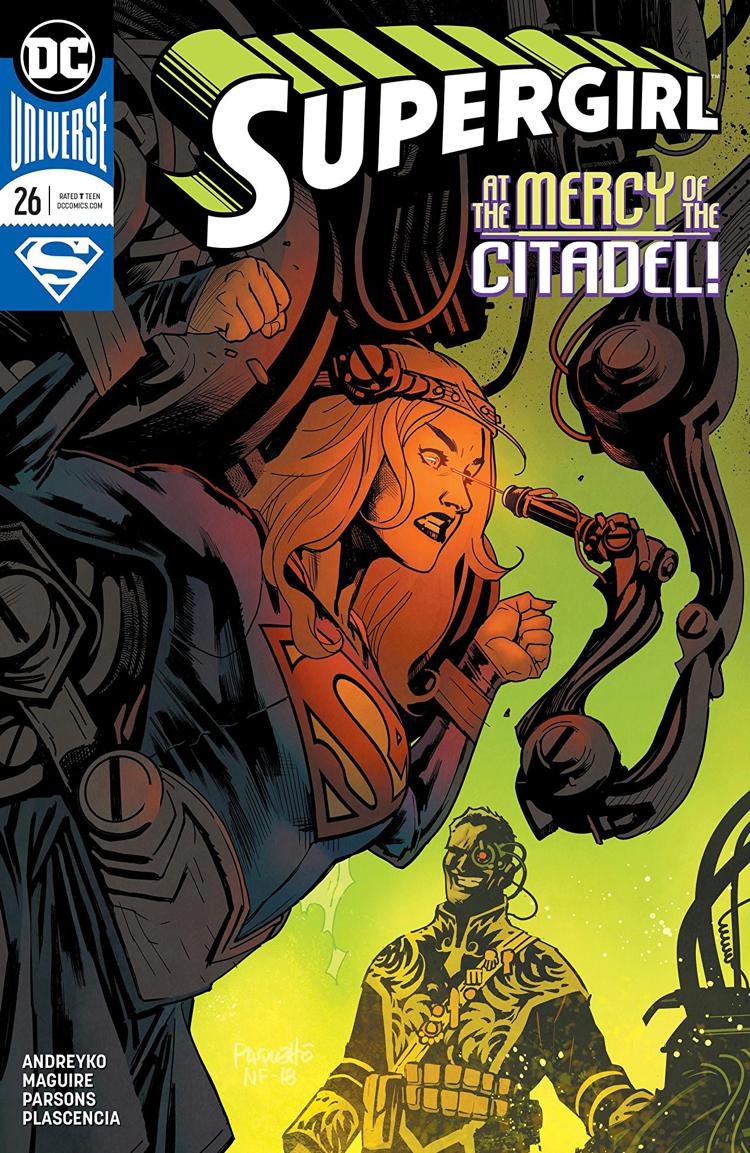 Supergirl finds herself in the Vega Sector, in the hands of Harry Hokum. Will the Omega Men help her escape?

In Supergirl #26, Kara finds herself the prisoner of Harry Hokum, the leader of the brutal Citadel. He extracts her DNA, then imprisons her. She’s then broken out of prison by the Omega Men, liberators of the Vega System.

There’s a very odd big-picture choice made in this issue, and that’s bringing the Omega Men, and the Vega System at large, to a rough approximation of its status quo in the original Omega Men series from the 1980s. The directors of the Citadel have been replaced by cartoonish Harry Hokum, the Citadel is back in charge of the Vega Systam, and the Omega Men, at least so far, are back to being relatively uncomplicated heroic freedom fighters. Indeed, a number of Omega Men who died in the eighties or later are back to life, though at least some of those resurrected characters seem like they’re going to get an explanation in a future issue.

What’s weird about all of this is that it seems to ignore what happened in 2014’s Omega Men series, which added depth to the freedom fighters’ characterization and made their mission significantly more morally complicated. At the end of that series, the Citadel was defeated and Kalista reigned as the brutal queen of the Vega System. Here, she seems to be back to being Primus’s second-in-command in a group fighting a dominant Citadel. And while everyone is shocked to see Nimbus, Harpis, and Demonia still alive after being killed off in the eighties, nobody says a word about Broot, last seen dead in the 2014 series, here alive and swinging. The only evident remnant of the most recent Omega Men series is the presence of Scrapps, there a violent child wracked by the traumatic enslavement and genocide of her home planet, here a fearless acrobat and markswoman.

And look. I get it. I’m fairly loose and non-judgmental about continuity shifts and reversions to the status quo. I tend to feel like creators should tell the stories they want to tell, without being limited by the shackles of continuity. That said, in a big, ongoing superhero universe like DC’s, a gentle nod in the direction of “Yes, we’re changing things, please bear with us,” is appreciated. In this instance, it’s particularly striking because of both the monumental changes from when last we saw the Omega Men and because, at least at this point, it appears as though the Omega Men situation is regressing from a fairly nuanced and mature place to a more black-hats-and-white-hats sci-fi serial action status quo.

All of that aside, what’s here is well-done. There’s good action as Supergirl breaks out of her cell and the Omega Men break in. There are interesting plot developments and the setup for future story’s with Harry Hokum as he makes use of Kara’s kryptonian DNA. And the character of Splyce is further developed as a well-matched antagonist to Supergirl.

The art is exceptionally well-done, and particularly suited to this story. Maguire draws great action scenes, dynamic and clear, and his facial work is unmatched in the industry. It’s a bit of a Maguire cliché to have a series of parallel panels with varying facial expression, to show a character moving through a complicated array of emotions, but he does it multiple time in this issue and every time it’s a delight. It would be a waste to have Maguire on a book and not use one of the most unique tools in his kit. Colors throughout are vibrant, with primaries that match the adventure cartoon feel of this run at large.

Supergirl #26 is a fun and endearing comic that, aside from my idiosyncratic issues with continuity, is a delight from start to finish.