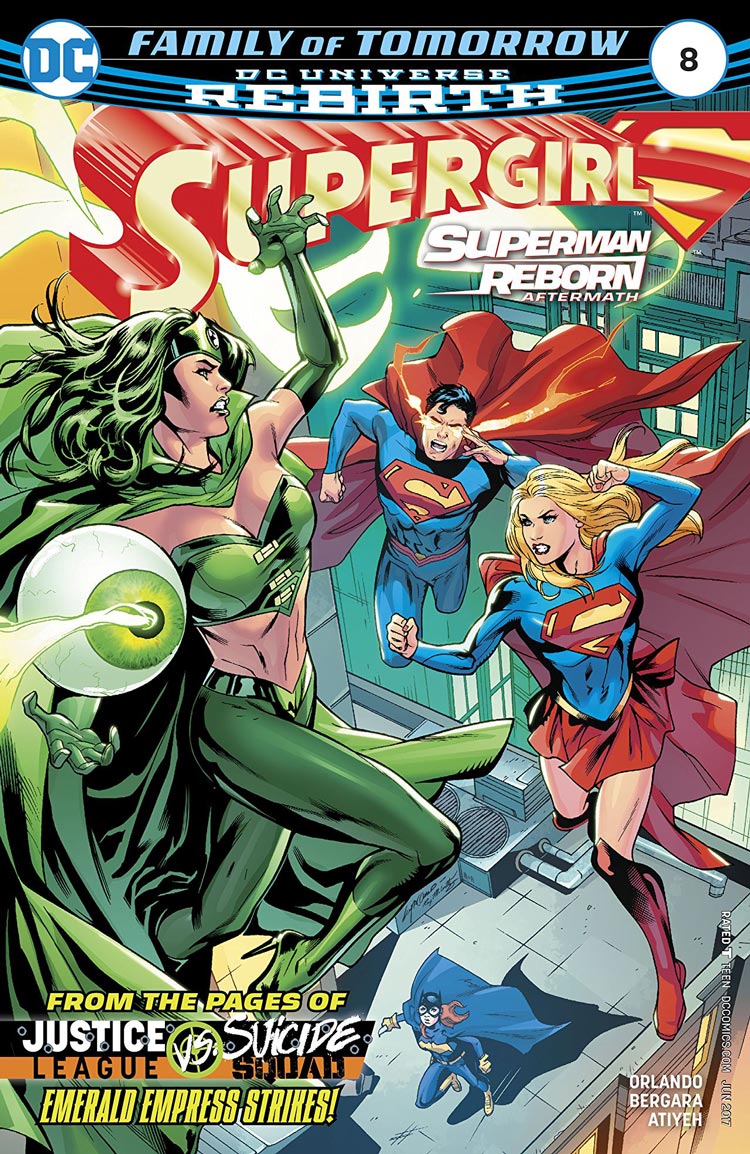 Supergirl hangs out with Superman, fights the Emerald Empress, and gets sent to a meet-up with Batgirl, all in one issue!

This comic manages the seemingly impossible. It’s a tie-in to three different events, all spinning out of different titles, and manages to be a fairly satisfying stand-alone story. It wraps up the “Superman Reborn” event that played out in Action Comics and Superman last month, it plays with a loose thread from December/January’s Justice League vs. Suicide Squad event, and it teases the continuation of a story begun in March’s Batgirl Annual #1.

The story begins with Supergirl meeting up with Superman just in time to jointly fight Emerald Empress, last seen departing mysteriously from Justice League vs. Suicide Squad #4. Most of the issue then follows Supergirl and Superman hanging out and chatting (about the events of “Superman Reborn, among other things), before setting up a team-up with Batgirl next month.

By all rights, this should be a mess. Indeed, some might argue that this sort of cross-over traffic jam is exactly what’s turning off new readers from continuity-heavy superhero comics. Yet this issue handles the multiple colliding plotlines with aplomb and shows that continuity need not cause headaches when handled with a deft touch.

What we have, then, is a touching, funny glance into the Supergirl/Superman relationship, with insight into Supergirl’s struggle on Earth and how it differs from Superman’s. There are also amusing interactions between Kara, Jon, and Lois as well as a relatively succinct summary of the events of “Superman Reborn,” for those who either skipped the event or couldn’t quite make heads or tails of it. It’s an excellent breather issues between arcs and, despite the imposing promise of multiple cross-over tie-ins on the cover, is actually quite new-reader friendly.

The art well-suits the material. The style is a bit more cartoonish and expressive than DC’s general style, which works well with the lighter tone of this issue and its conversational focus. The artist, Matias Bergara, isn’t the regular artist on this title, but his style, while slightly rougher than series regular Brian Ching, isn’t jarringly different. The art works well and feels contiguous with the rest of the series.

This is aided by Michael Atiyeh’s colors, which maintain the bright, colorful primary style seen throughout the rest of the series and help retain a sense of continuity. It adds up to a refreshing and fun book to look at as well as read.

Supergirl #8 crosses over with three other storylines while serving as a wholly satisfying story in itself. It’s deft and fun and maintains the tone of the rest of the series even as it ties up loose ends from other comics.