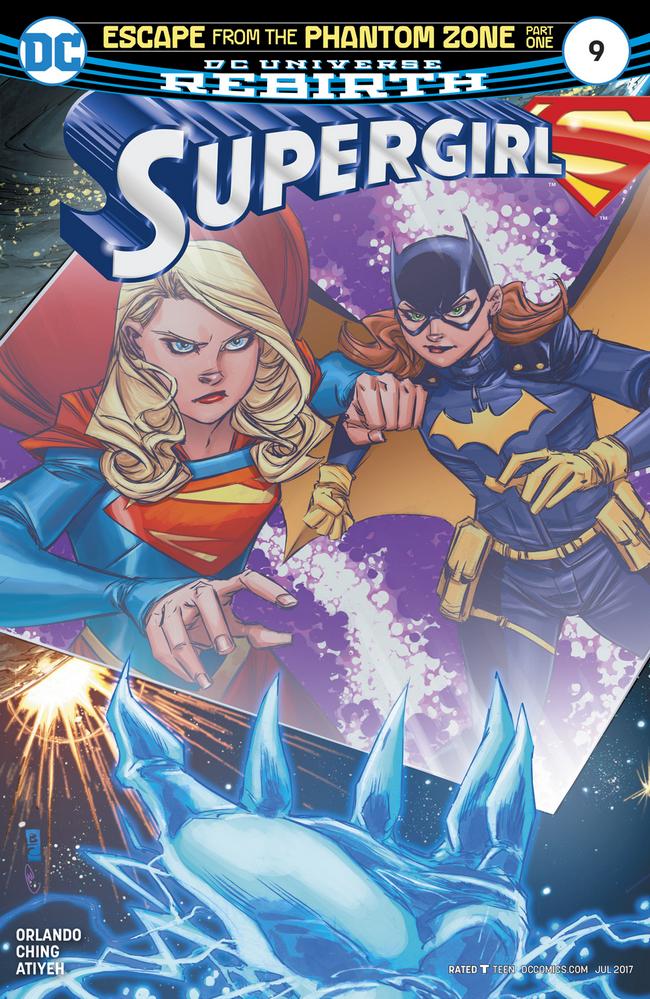 The “Phantom Zone; an eternal living death.” These words were spoken of this prison dimension by the Kryptonian Council in the 1978 Superman: The Movie. Krypton’s worst criminals were sent to this dimension to be imprisoned for an eternity. In Supergirl #9 we find Kara Zor-El joined by Batgirl to deal with a device that uses energy from the Phantom Zone.  It is an exciting but forgettable start to the new “Escape from the Phantom Zone” story line.

Issue #9 continues the story and team up that was begun in Batgirl Annual #1. It is a fast paced adventure written for a younger generation of fans. The reader will notice that Kara seems to be coming into her own now. Steve Orlando is giving her much more confidence when dealing with other people. While she has shown plenty of confidence when dealing with enemies she hasn’t always handled relationships as well. It’s good to see her start to acclimate to a human life. There does seem to be a change in the girl’s relationship though. The reader may pick up on a tension that is present in this issue that wasn’t there in their previous adventure together in Batgirl Annual #1. Also, the issue seems to be made up of bits and pieces that were all just tossed in and not very cohesively either. The story moves at a quick pace, though, especially once the action starts. Although Supergirl #8 was a break between story lines the reader may find this issue takes a little too long to get the girls where they need to be to start their “Escape from the Phantom Zone.”

This issue brings Brian Ching back after taking a break for a couple of issues. While Matias Bergara has a very similar style, Ching’s take on Supergirl looks just a little bit better.  He tends to draw Supergirl just a tad bit older than what she looks like as drawn by Bergara. There is also an edginess to the characters, they aren’t so smooth around the edges, and this gives them a more rough and tumble feel to them. They look less like little girls and more like teens. This doesn’t work as well for the villains who tend to look like Disney versions of themselves. Although a pretty serious enemy appears in the first half of the book the reader may not feel very afraid for the girls. He almost looks like he could be handled with a snap of your fingers.  Less is more for most of the issue as speed lines are used for much of the backgrounds and when combined with Atiyeh’s colors it has a very nice effect.  There is some really nice panel work done in the second half of the book, especially as they arrive in the phantom zone. The reader is twirled into the Phantom Zone along with the girls through the layout of the panels. The cover is a nice nod to the aforementioned motion picture with the girls trapped inside the glass panel version of the Zone.

Overall this is a decent issue with a lot of action, but you won’t miss much if you skip this one. More than likely the first few panels of the next issue will sum up the events of this one. Unfortunately since DC’s “Rebirth” Supergirl has only been mediocre except for a very few instances. It’s too bad, she should have a much more popular book since she has the TV show on right now. The element’s are all there for Kara to be great again, but maybe skip this issue unless you are a completest.