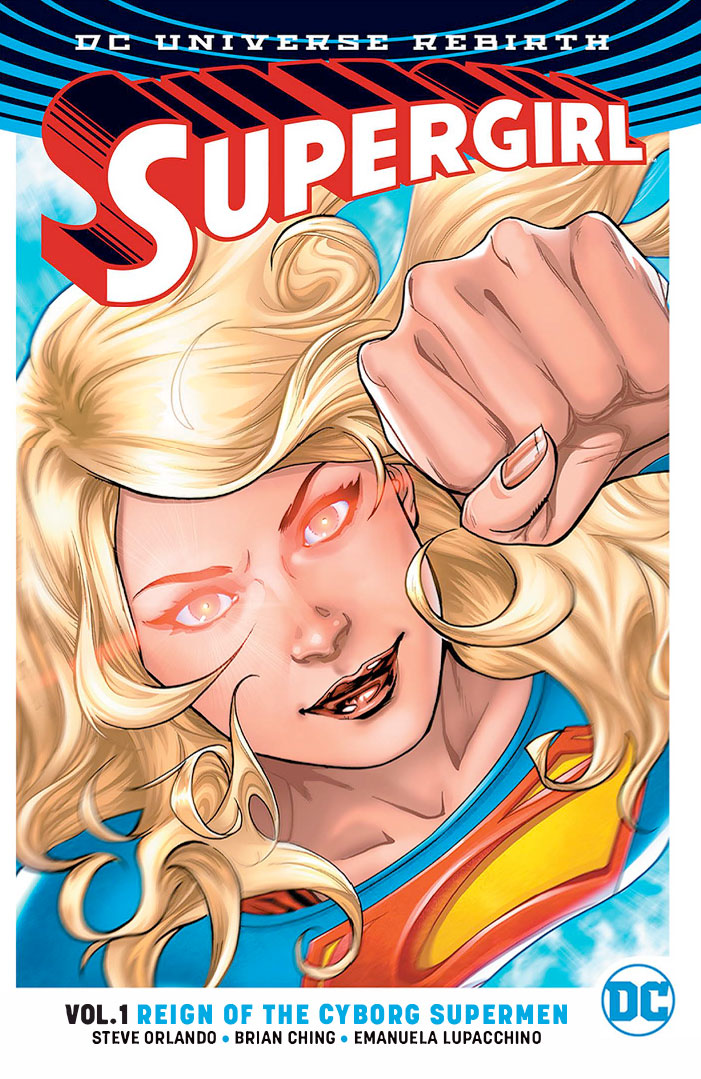 The Girl of Steel has lost her powers, her planet, and her family in a fairly short amount of time. Supergirl needs a jumpstart, and it comes in the form of a brand new job, city, a familiar DEO handler, parents, and the return of her powers. But what she doesn’t know at the start is that her past is about to knock on the door very loudly — in the form of her dead father, the Cyborg Superman!

It’s a good year to be a Supergirl fan. Hit TV show. Co-starring roles in not just a kid-friendly DC Super-Hero Girls series, but also the Nazi-punching drama series DC Comics Bombshells. Being Super, a prestige-mini-soon-to-be-graphic novel taking Kara back to Smallville-like teen drama. And a brand new ongoing, collected here in its first volume, bringing in the best of what makes Supergirl shine on the television, but exploding out the possibilities in unique DCU fashion.

Truly, Orlando and Ching have the advantage over CBS in one satisfying way: budget. Alien threats and interplanetary travel — not to mention the resurrection of an entire race via cyborg technology — may be impossible for the weekly small screen, but is more or less routine for the monthly comics page. But the personality being infused here — less of a shift from the previous run and more of a stabilization — is what makes it so reminiscent of the charming nature we were missing offscreen for some years.

Orlando’s Supergirl isn’t subject to wild mood swings or dramatic teenage angst in the way many comics like to elongate the potential for super-teen tantrums. She’s never really wrong, but learns her lesson by the end because she went through the crucible. This Kara Danvers is simply a pretty smart girl with feelings she may or may not share, but still run close to the surface. She has doubts that she’s honest about. And she has convictions that don’t waiver from beginning to end.

If anything, it’s the people around Kara, namely her enemies, that end up shifting their perspectives based on Supergirl’s unwavering commitment to their wellbeing. For Orlando, beating back the villains isn’t job number one for the Girl of Steel. It’s seeing that they — and of course, those they put in danger — are listened to, helped, and ultimately inspired, just as humanity has inspired Kara.

The writer’s addition of several new (but mostly recognizable) cast members does what most recent runs didn’t seem to manage: give Supergirl a sustainable support system that drives nuanced characterization out of Supergirl at almost every turn. From surrogate mother Eliza Danvers (whose subtle disability affects neither her ultra-competence at agency work nor confidence in substitute mothering) to new DEO handler Cameron Chase (whose gruff exterior — and again, subtly rendered romance with Shay Veritas — is a great foil for Supergirl’s more proactive nature), Orlando is infusing National City with personality and light conflict to spare. And that’s even before considering the affect of one Cat Grant…

Past the initial introduction beautifully illustrated by Emanuela Lupacchino, the entirety of the first six issues is granted a consistent art team in penciller Brian Ching and colorist Michael Atiyeh. It’s the kind of regularity that few monthly comics are blessed with in today’s market, and I can say unequivocally, it makes a difference, and not just in collection. Having that sense of stylistic continuity is key to developing an attachment to a drawn world.

While Lupacchino renders Supergirl as a fairly standard comic book age of “young adult, maybe could be in college” (but like I said, does so with such grace and powerful sense of action), Brian Ching brings a much needed youthful feel to Supergirl’s appearance and body language. She is not always graceful. She is occasionally making the types of faces a 14 to 16-year-old girl might make when her mom isn’t looking. But more than anything else, she’s appropriately proportioned, softened in the face, and nary an upskirt shot can be found — at all. That factor alone is a revelation for Supergirl’s last 15 years of publishing history.

That’s not to say Ching’s work doesn’t have its flaws. While there’s a lot of attention to detail in focused panels to Kara’s posture and expressions, a lot of panels are given very rudimentary shapes and blank faces to fill in gaps in the narrative. It’s not so much that backgrounds go unfinished; in fact, they’re delivering enviornments very effectively throughout, from National City to the depths of space and new Argo City. But when scenes get too complex, areas of the page seem to go low fidelity.

A return to a Supergirl that fans of the show (and dare I say it, her earliest adventures) will recognize immediately, Volume 1 of the Rebirthed series from Steve Orlando and Brian Ching is an enormous step forward in returning this character to the front of the pack. She feels real as a teenager and the title as a whole has a distinct point of view that shows a whole lot of heart. And if you have kids, particularly young girls, at home — it’s a great place to start their love of the Girl of Steel.