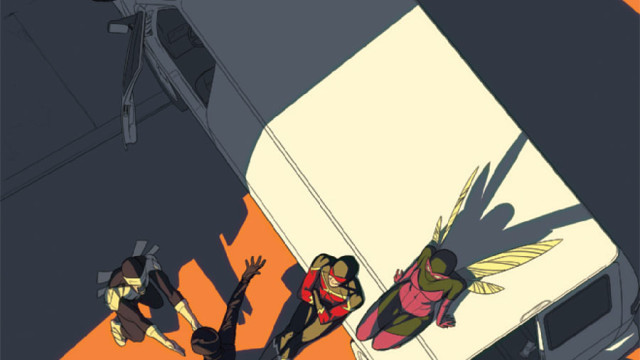 The non-linear progression of just what happened during the big heist with the five villains (which might finally be changing next issue) of the Sinister Six continues to unfold.

This issue lays out just why Overdrive and Beetle ended up stealing a school bus for their getaway through Boomerang’s continuous dialogue that is either breaking the fourth wall or laying out the confession to someone else later in the series. No matter what the combination provides humorous and snark worthy moments of comic fun.

From having Beetle “using the facilities” to internet rating her romantic encounters, and having Shocker hiding out in said “facilities” and Overdrive laying is soul bare, Spencer makes sure that nothing is held sacred. While heroes are glorified and shown at their best. Along with Lieber and Ellis’ humorous portrayals, this team is making sure to show villains at their most down to earth and vulnerable; even if that makes them less than endearing. In Shocker’s case it makes him horribly uncomfortable and Silvermane just that more perverted and creepy.

There are several levels to this book that can be analyzed. There is the blatant humor, the subtle context of good intentions gone wrong, as well as the study of trust between people who cannot be trusted. Of course, then there are high speed car chases, classic across the page maps of movement and action plus three full “silent” pages where Spencer allows the art to tell an entire backstory of just what Speed Demon was up to.

It’s the type of creativity and cleverness that make comics fun to read. The stakes are not necessarily high, since you know where all the final players ended up, which deflates some of the story. It does give you an emotional footing on where each of the characters stand with one another, which will invariability shape future encounters and conversations. Also, a good rereading of previous issues is rather necessary for those who have trouble keeping up. Despite the recap pages, the series does will not necessarily sell itself without the impressions and backstory of previous issues. The personalities and growing with these characters is what sells the stories each time. Without that background, I’m afraid it may all just come across to new readers as mediocre and drifting. However, the final page theoretically promises big changes next issue with the reveal of Shocker’s, “… mad as hell and I’m not going to take this anymore,” moment.