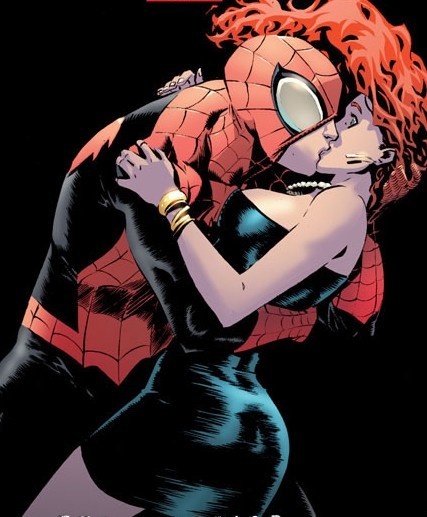 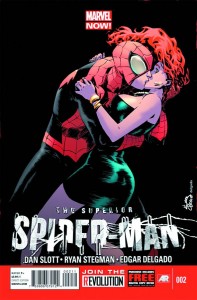 The dreaded “5th Wednesday of the month” for comic book readers is no more! With Marvel’s extremely hectic and jam packed Marvel Now release schedule, readers get a double dose of Spider-Man for the month of January. After the reveal at the end of issue 1, that isn’t a bad thing.

“SpOck” (Spidey+Doc Ock. Eh? eh?) continues his quest to improve both the lives of Spider-Man and Peter Parker.  In issue #2 he sets his sights on a certain redhead, Mary Jane Watson. The story and saga of SpOck is still good clean fun. A lot of the parts that I enjoyed so much in issue 1 continued in this issue and SpOck is quickly becoming one of my favorite characters in the Marvel Universe right now. He’s written about as close to perfect as you can get. SpOck is consistently funny and his approach to certain situations and inner dialogue are always interesting. There have been many different spider-mans and characters that have spawned from this corner of the Marvel Universe, but no one else has had the same problems as Peter Parker and I really enjoy seeing another character attack them and appreciate how difficult it is.

Oddly enough, the part of the book that holds issue 2 back is the ‘real’ Peter Parker.  When Ghost Peter was revealed at the end of issue 1, I knew he would have a presence in the book. I didn’t expect him to already have this much of a presence  Ghost Peter is essentially now in every single panel that features Spider-Man. It’s a shame because forcing him into so much of the book is really taking away from Doc Ock and not giving him the spotlight his character deserves. Most of the pages felt very cluttered.  You have a character (SpOck) that loves to talk and a background character (Ghost Peter) that also loves to talk but because of his situation is basically talking to himself and filling each panel with 2 conversations.  Combine those with a writer who leans more towards dialogue and you have an overwhelmingly amount of dialogue bubbles through the comic.

The clutter is especially frustrating because it’s hiding some truly wonderful art by Ryan Stegman. He has quite a challenge because he has to draw the same character twice in most panels. Not only do they have to look exactly alike and remain consistent the whole way through, but Stegman also needs to display completely different in each panel they are featured together. He manages to pull it off flawlessly. His vision is Spider-Man is one of  my favorites right now. Since Dan Slott will never leave Spider-Man, I hope this become a team for quite a while because I want to see much more of Ryan Stegman’s art on Spidey.

I do have beef with the cover though. It felt like a cover that garnered not so favorable news stories last year. The iconic image of Spidey kissing MJ was enough to make this cover stand out and her back breaking posture in a skin tight black dress wasn’t necessary. The cover definitely felt like an afterthought because she is respectfully drawn through the whole comic, and even her ‘clubbing’ outfit didn’t even stand out.

Superior Spider-Man still has a ton going for it. I can safely say I would recommend the series to Spider-Man fans, but the only way this story is going to work going in the future is if they let the NEW Spider-Man become the star of the title.