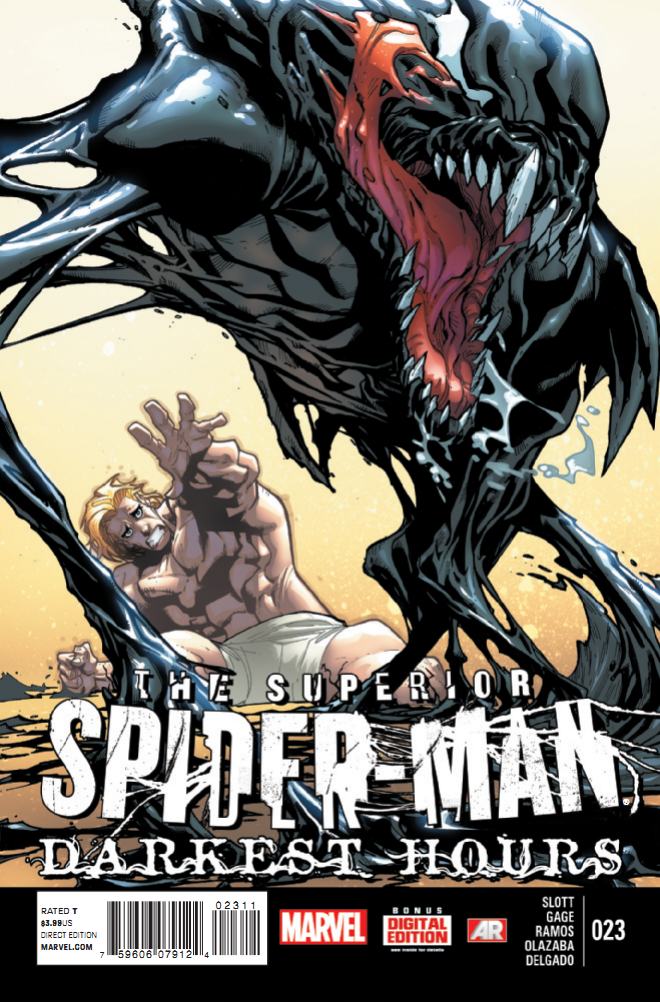 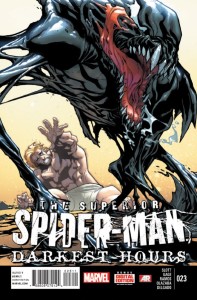 The ride that has been The Superior Spider-Man thus far has been a spectacular (nay, superior?) one. Slott’s idea for a Peter Parker with the mind of Otto Octavius has granted the writing staff of the comic, as well as its readers, the ability to see wildly different scenarios of Spider Man-past come to thrilling execution. So far we have been able to see the new return — and demise — of Alistair Smythe, the Spider-Slayer, multiple Hobgoblins, Kingpin and the Hand, the resurgent power of the Green Goblin, and we have even seen Spider-Man 2099 brought into the plot-fold.

It was only a matter of time before Venom was brought in, as was the case with issue #23. Much like how Peter was re-imagined by Dan Slott, the Venom symbiote and Flash Thompson were combined by the wild imagination of Rick Remender in Venom #1 which arrived in 2012. Now the new Venom and the new Spider-Man have come to a head-to-head, the results of which actually showcase the best aspects of the “new” Peter (lovingly called “Spock” by some).

The battle from issue #23 is resolved quickly, mainly through Flash’s creative use of his symbiote and the inability of the new Spider-Man to keep his cool. Otto might be a genius but recent battles have begun to show that he is quick to desire results. When those results do not happen according to his schedule, things tend to explode.

The forefront of the issue is actually taken up by the relationship between Peter, Aunt May, Anna Maria, and J. J. Jameson, Sr.  Past issues have shown Otto caring for “his” loved ones, however these emotional entanglements have also been mixed with his pride. The recent abduction of Aunt May by Blackout hurt Otto, but it also proved he was vulnerable. He has learned to take two steps towards becoming a genuine hero, always to take three steps back as he engaged in his old villainous actions under the new guide of heroics. Otto (and Cardiac) fixes Aunt May’s hip, however he does not remain to see her walk. The moment is subtle but Otto’s absence is important as it shows he is not done developing.

While J.J.J has his own plot to escape the thumb of Otto’s blackmail, the bigger kick is the inclusion of the Spider Slayer designs and Miguel O’Hara in the same room. Implications abound!

Even more interesting is the developments between Peter and Anna Maria Marconi. This issue had Peter, Anna Maria, Aunt May, and J.J.J, Sr. all sit down together. Sadly, Otto is again depicted as not having fully grown and he lashes out after Aunt May expressed some well-meaning but oddly borderline rude remarks concerning Anna Maria. While the topic brought up did not expressly show Aunt May in the best light, the moment did not seem forced. Otto’s temper and his rush to then try and remove the symbiote from Flash Thompson demonstrate that when upset Otto resorts to proving his superior intellect over fields he can control. Sadly, as the final panel of Issue #23 shows, Otto tends to bite off more than her can chew. If it isn’t underestimating Peter’s old enemies, building up his own science institute, or building his own Spider-army, he has now underestimated the Venom symbiote.

As Otto grows through his adventures/escapades in Peter’s body, he now faces off against one of Peter’s most dangerous enemies. Between the events of the final page of issue #23 and the implied discovery that Green Goblin has made, the future of Otto looks even more challenging with every issue. Once can only imagine where these stories will lead if (or when, to some) Peter gets his body back.

The art style of Humberto Ramos yet again contributes to the dynamic feel of the story Slott and Gage are crafting. From the grim faces of the Goblin’s forces, the symbiote’s wild tendrils, or Otto’s twisted experiments on Flash, the designs work together well. The other secret of the art is the vibrant and bold colors of Delgado. His palettes provide vibrant energy to every energy-bolt, explosion, and punch.

As the build-up continues towards unveiling Green Goblins’ end-game and the success or failure of Otto to become a hero, the face-off between Flash and Otto continues to ramp up to a great finish.