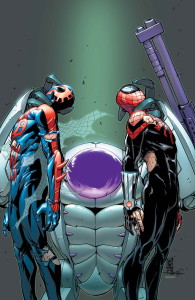 One of the most defining aspects of Spider-Man as a character occurred during the story arc entitled “The Night Gwen Stacy Died” which ran between June and July of 1973. Gerry Conway had been tasked with doing the unthinkable – kill off Peter Parker’s girlfriend, and not just because of the Green Goblin’s actions, but because of Peter’s direct attempt to save her life. Many suspected when Otto became the new Superior Spider-Man and it was revealed that the Green Goblin was out in force again that it meant only one thing – pain and devastation. While Issue #29 of the Goblin Nation storyline does not deliver quite the blow to Otto some expected, Slott does manage to inflict grievous wounds onto Otto as we approach the finale of this raging battle.

Right off the bat the issue presents the Green Goblin sitting on a throne-like chair watching the chaos of his campaign to level everything related to Spider-Man. This image is quite fitting as it shows the one thing that Otto never had preparation for, that being a villain who was every bit as meticulous as he was at being a “hero.” Elsewhere in the story we also have Jameson returning to what Jameson has always (unfortunately) been best at – hating Spider-Man. Now, much to the city’s misfortune, Jameson’s converted Spider-Slayer army (built with the help of Spider-Man 2099s villainous Alchemax Corporation) is unleashed for the sole purpose of stopping Otto, even if the people of the city are left behind in the ruin of Goblin’s attacks. While Slott’s script does try and give Mary Jane something to do, she is largely background noise for this issue as the Goblin and Jameson take up the lion’s share of the plot.

There have been many, many twists to the character dynamics in Superior Spider-Man and that has been a large part of the fun of the comic. Still, twists aside, Slott is going old-school in terms of villains. Jameson out for Spider-Man’s blood? An army of Spider-Slayers? Green Goblin bringing the pain to everything in Spider-Man’s life? These are classic elements from decades of the Spider-Man mythos itself and they play out wonderfully together on the page. Heck, even the 90s Spider-Man 2099 plot being interwoven into the mix has managed to bring decades worth of Spider-stories into a new and exciting build-up. For anyone who has ever thought that Dan Slott has forgotten what Spider-Man comics are about, this issue is a powerful reminder that Spider-Man comics are not always about Peter Parker but also the lore of Jameson, Osborn, O’Hara, and others.

Another fun aspect of this issue is how the Green Goblin serves as a stand in for the nature of more cynical readers of Superior Spider-Man. Goblin takes Otto to task for having retractable spider-arms, for his defeating Spider-Man instead of him, for always having been Spider-Man’s #2 ranked nemesis, and for being incapable of being the kind of hero that the true Spider-Man was.  In the biggest and best splash page of the issue we see artist Giuseppe Camuncoli detail out the one thing that has made Green Goblin the #1 nemesis to all Spider-Men – destroying what is most important to them. While the nature of what is destroyed is tantamount to a preview of the real pain Goblin might have in store during Issue #30, it is severe and it is devastating to Otto.

The final moments of the comic serve as a twist on the old theme of “The Goblin kills somebody close to Spider-Man.” While, again, this moment is not what some readers might be expecting (and, indeed, like the splash page is serves only to highlight the potential ruin that is to come in issue #30) it still has punch at the end.

Issue #29 serves as the preview for issue #30 that many readers have been awaiting. It establishes that despite Otto being the new Spider-Man, Green Goblin will go to any and every length to destroy Otto, his memory, and those close to him. While the plot of Spirit-Peter is relegated to two pages, it serves its purpose will enough in that is reveals some new perspective of what Otto has gone through by being (in Otto’s eyes) Spider-Man’s personal punching bag. This plot point, as well as all others, work together to make Superior Spider-Man #29 a must have issue in Slott’s deconstruction and revival of all things Spider-Man.