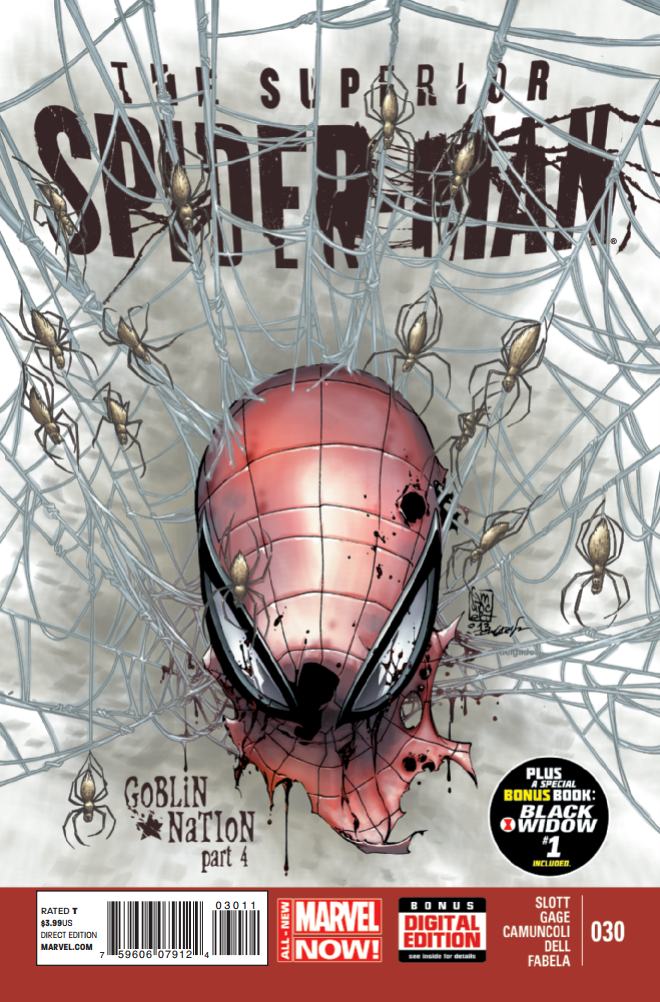 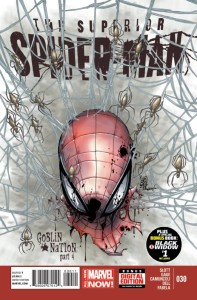 The time has finally come for the defining moment of not only the “Goblin Nation” storyline, but also for the whole of the Superior Spider-Man series. While spoilers are capable of being hidden, there is a progression of events — ones noticeable throughout the entire Superior Spider-Man titles — that should leave impactful events on the final page of issue #30 predictable, yet welcomed and exciting.

When examining the larger story of “Goblin Nation,” it becomes evident that Otto has had severe shortcomings during his tenure as Spider-Man. His reliance on mechas and inventions, goons, threats, and blackmail have created an atmosphere of arrogance that allowed the Green Goblin to infiltrate — and now immolate — much of New York.  Otto’s failures, not fully manifest from witnessing Lamaze’s sacrifice in #29, get dragged out kicking and screaming.

The Goblin proceeds to torture Otto with threats against children he had saved earlier and (naturally) against Anna Maria herself.  His character is tested and pushed to extremes that highlight Otto’s greatest flaw – hubris due to perceived superiority. Much like how villains are commonly undone by monologue, or by not expecting little details to ruin their plans, so too does the ‘heroic’ Otto Octavius find his house of cards in flames.

Issue #30 might seem like it suddenly takes a sharp turn towards unexpected territory meant to undercut Otto’s current plight and the plight of NYC. In reality, this has been 30 issues that have been designed to lead up to the final page. Every moment, every battle Otto has had, ever life he has saved (or, ruined) has been to showcase who the Superior Spider-Man genuinely is. Issue #30 pulls no punches when it delivers the impact of Otto’s greatest personal victory, as well as his saddest act in and out of costume. We see Otto’s ultimate act of heroism and it might not be what you expected. However, given the nature of comics, it almost might be exactly what you have been expecting. Either way, this issue is a magnificent way to wrap up a 30-issue character study on Peter Parker, the role of Spider-Man, and why the fans love what the comic is about.

Giuseppe Camuncoli’s art is in rare form as always (seriously, how can his art consistently be so good?) but it especially shows in one spectacular (eh? eh?) splash-page that will assuredly have Spider-fans overjoyed.

While there is still one issue left in the “Goblin Nation” storyline, the final players in the finale have been cast and now there is only a few more weeks to see the fallout. Still, other side-plots come to different points that should be mentioned. Spider-Man 2099 is left in a percarious state by the end of the issue (much as he was left in issue #29) and Liz Allen hints at yet more potential tragedy waiting in the wings of Superior Spider-Man #30. While the plot of Spider-Man 2099’s fate could have been handled a little better, his jab at Otto, as well as Green Goblin’s impression of the Wicked Witch, the pace rolls along at a rip-roaring momentum.