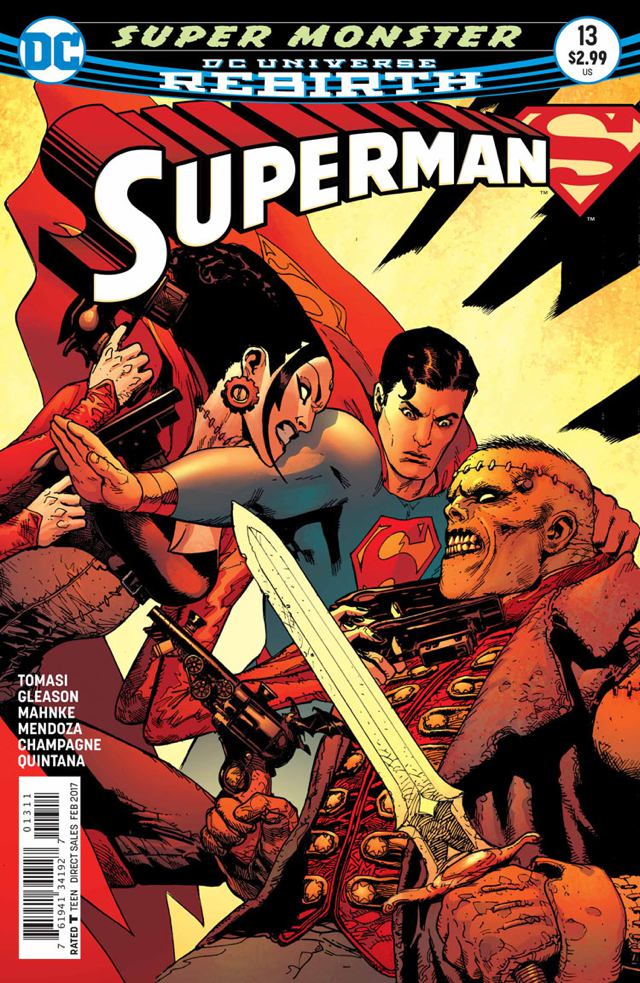 Once upon a time, the logo on the cover of a story such as the one contained in Superman #13 would have read: “DC Comics Presents”. Times change, characters change, and so does readership. There are no team-up titles to be found on the new comic racks, but that doesn’t preclude stories such as the two-part “Super-Monster” from happening and bringing the throwback, fun adventures of yesteryear’s team-up books.

Superman #13 (which continues the tale started in Superman #12) celebrates the monstrous mayhem of Frankenstein and his adventures under the auspices of S.H.A.D.E. (Super-Human Advanced Defense Executive). One of the highlights of the initial New 52 launch, Frankenstein, Agent of S.H.A.D.E. established Frankenstein’s role in the DC Universe as a monstrous monster hunter, willing and able to take on threats of any nature, and more often than not, taking on those threats in a manner shrouded in secrecy. That’s exactly the case here, as Frankenstein is tracking, and, as of the opening scene in Superman #13, has captured Kroog, an interstellar threat on level with those found in the Men in Black movies.

The plot is familiar enough, the characters fleshed out enough, and the story energetic enough to just roll and keep rolling. Writers Peter J. Tomasi and Patrick Gleason hit all the right notes for Frankenstein, including his trademark unsatisfied grunts. The writing duo give Lois a chance to lash out, Superman a chance to step back, and Frankenstein ample opportunity to shine through the artwork of the artist who unmistakably draws the definitive version of Frankenstein’s monster (at least in the DC Universe).

Doug Mahnke has been cranking out superior work on Superman, but with this story, he reminds us all that he excels at the weird and grotesque, the things that hide in the shadows cast on the fringes of reality. He had a hand in crafting the early adventures of this iteration of Frankenstein in Grant Morrison’s Seven Soldiers saga, so it’s only fitting he has another chance to draw Frankenstein (and his bride). And he absolutely nails it, right down to the steampunk gears on Frankenstein’s shooting irons.

I would love to see an entire issue of a comic – any comic – where one inker is strong and fast enough to handle Doug Mahnke’s work. That’s not a dig against the trio of Jaime Mendoza, Keith Champagne, and Norm Rapmund, but each of those three tend to bring different lines and amplify particular nuances in Mahnke’s work. In some panels, crosshatching is strong, in others it’s non-existent. Character outlines vary, and general shadow work tracks inconsistently throughout Superman #13. None of it is bad, mind you, just inconsistent. One inker would streamline the variation present, much of which colorist Wil Quintana blunts nicely.

Parallels between Frankenstein and Superman drift through the issue, but the differences in the characters are hammered home on the last page, as, once again, Tomasi and Gleason emphasize the man behind Superman and the importance of family in his life. Superman #13 is a fun romp with heart, smartly matching creator to character for max effect.