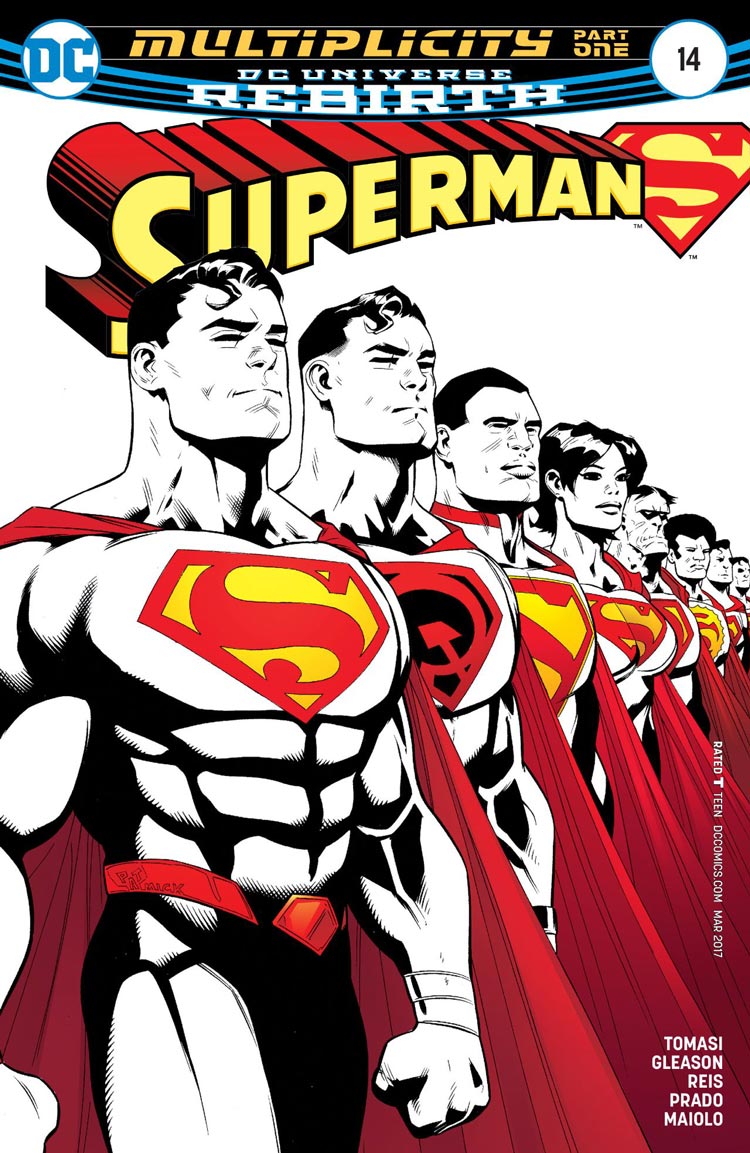 The new year of Superman is starting off with a multiverse-sized adventure. “Multiplicity: Part One” is a great example of showing off the legacy of a character and adding existing characters from story lines that haven’t been seen for quite some time and you’ll get a promising start to an event-sized story in one title.

“Multiplicity” begins like any other story goes: Kal is on a stroll singing (which may or may not be a call back to Final Crisis given who the story involves) before happening upon the Superman from the Red Son Earth in dire shape. It doesn’t take long for our Kal to get caught up to speed for the most ambush, thanks to an ambush from the “Gatherers”.

What follows is a quick and strenuous battle between the two Supers and the very short for speaking aliens that seem dead set on their goals to capture Superman of Earth-30. Directly following is a double page spread that should make fans of Grant Morrison smile with glee because the Justice League Incarnate is back and better than ever!

Everyone is back from Morrison’s insane multiverse spanning book Multiversity: President Superman, Mary Marvel, Aquawoman, Red Racer, Machinehead, Green Lantern, and more. Both parties are on a time limit so we’re given the bare minimal summary of the JLI and their mission to help stop whoever is taking Supermen of the Multiverse hostage, the next target being the New Super-Man of China.

Kenan has a few moments of peace before being assaulted by the same “Gatherers” that attempted to take and fight Kal and the Superman of Earth-30. It doesn’t go well for Kenan and the JLI arrive too late to save the young Superman. And with a surprising revelation about the state of the rescue, the first chapter of this new Superman arc ends with a catalog of captives that’ll make you get out your Multiversity Guidebook out to check off if your favorite iteration of Superman made the panels.

“Multiplicity” gives us the reintroduction to the Justice League Incarnate, the immediate threat, and what’s to come. Tomasi and Gleason breeze through the developments of the issue at a brisk place, never slowing down on one story beat for long because they do have a lot of to get underway in a short amount of pages to do it in.

Reis, Prado, and Maiolo bring all the ferocity, grittiness, and action packed you’d expect to come with a Superman title. Everything from the colors, the sound effects, and characters all are the best they’ve ever been. One page is slowly seeped in the warm colors as Kal and Superman-30 prepare to light the alien menaces aflame with their heat vision. It’s an achievement to be rewarded to the entire creative team on fitting rather huge concepts and dialogue inside the pages utilizing all the panel space they have to spare.

You should come into this issue knowing Reis and Prado make a great case as one of the better art teams that have drawn Superman and his Multiverse counterparts. They get the character build right for the expansive action scenes and just understand how to present the character no matter what Earth he’s from.

The start of the new year brings more threats, more insane scenarios, and more often than not… more surprises aplenty for our heroes. Superman delivers on that wholeheartedly with no signs of letting up. “Multiplicity” begins with an interesting premise that connects old work with the current state of Rebirth, and if that doesn’t show what the line has been about this entire time… I don’t know what title does it better.