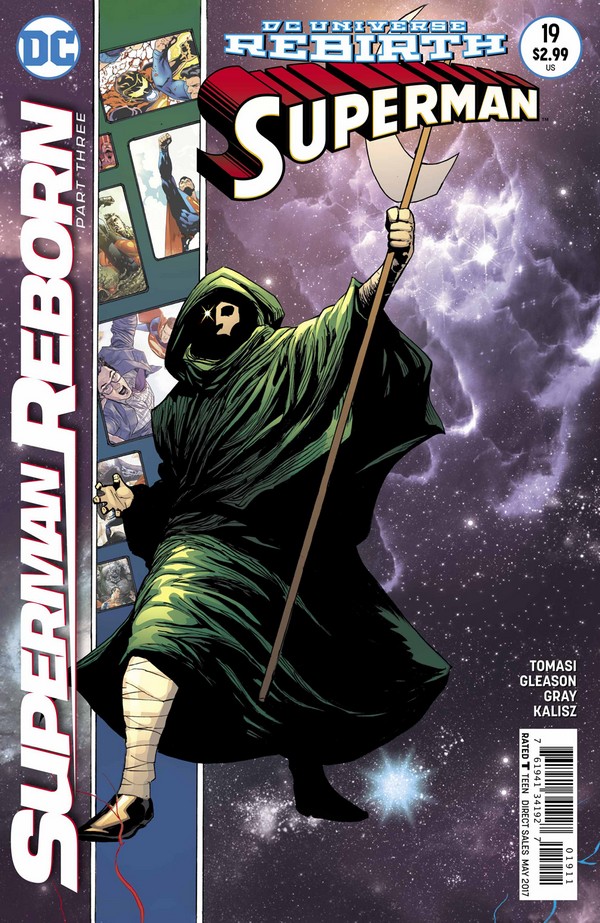 The penultimate chapter in the Superman Reborn epic is here and in-between moments that peel back the layers of what’s the deal with Superman and Lois, the issue runs, not walks to the finale.

The Superman Family have had better days to say the least: Superman and Lois are without their son, Jon is trapped in a perpetual Dark Zone of memories, and Lois is slowly forgetting the life she’s built…and that includes knowing who Superman is to her! Tomasi then propels us through the meat of the issue as previous arcs have shown him to, with stylized visuals and emotional story beats. The villain behind their troubles Mr. Mxyzptlk pops up as quickly as he can disappear when he doesn’t get his way and forces Superman and Lois into a game that reads like an ultimatum for the fate of their son. Things get absolutely insane from here as they have in past issues of this Reborn Crossover, in particular as per the usual of dealing with an Imp from the Fifth Dimension.

Gleason, Gray, and Kalisz continue their streak of being in sync to the ninth degree on the art. The colors and outlines serve a purpose in the story and serve as a signal to readers. Superman and Lois being outlined with a blue is telling of a overarching mystery of DC Rebirth and it comes into play later in the issue that makes use of the Superwoman Tie-In. Speaking of Superwoman, Tomasi builds on topics discussed in the title and bring them into an expanded light that uses the history of Superman in this Rebirth mystery. Tomasi clears up some pretty ultra sized events that stretch back to the dawn of the New 52 and it’s all talked about in a few panels while shuffling the characters to the next beat. The game is afoot at The Infinite Planet and Mr. Mxyzptlk holds all of the whimsy and mischievousness you’ve come to expect from him by now. He changes emotions and faces at a drop of a hat and is very much so delightfully deranged in his quest to finally get a game going with Superman.

Jon meanwhile interacts with his parents through unconventional means in the Dark Zone and the pages are illuminated in a blazing flame that’s only helped by Gray’s inking and Kalisz’s colors. The colors themselves continue to throw hints and signs of who is in allegiance to what side and the Superman Line has been all about the red and blue lately. The race to the top of the tower (and to the final pages) are told in quick snapshots, detailed, and stylized splash pages. From Mr. Mxyzptlk overseeing the game like the creepiest Game Master, to Superman and Lois crashing their way to the winning point. It all boils to an explosion of energy and the comeuppance of Mxyzptlk as Jon and his “parents” are rescued and back and newer than ever with Mr. Mxyzptlk ending the issue with the best three words that’ll make you stand up and cheer with the way the finale is shaping up to be with this last page bombshell.

Superman #19 finally let’s the larger narrative include the other Superman Family titles that’s finally showing some of the longtime payoff of the mysteries we’ve been asking since DC Rebirth started. Mr. Mxyzptlk has proven to be more than a pint sized foe for the family and the issue continues the synergy and pacing of Action Comics keeping everything lean and tight so nothing drags for to long. The art team has never been better putting all amounts of their energy into the backgrounds of this wicked game and the crackling energy that burns bright. Superman Reborn has been a crossover that’s swerved expectations but hasn’t disappointed so far. With the end in sight, the finale has a lot to answer for and it’ll be a treat to see how the story wraps up.