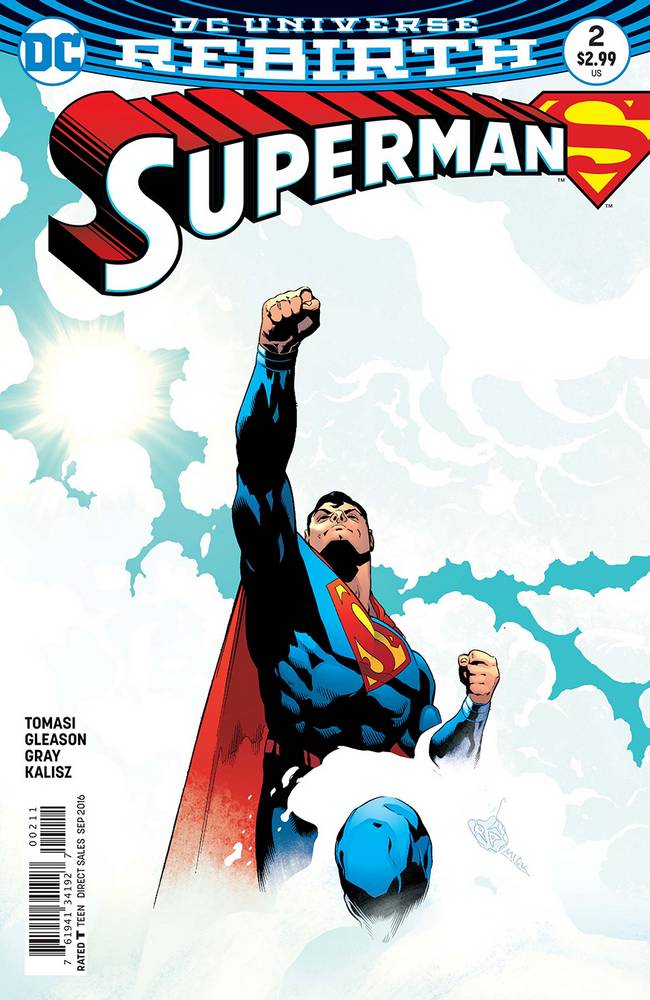 This is the Superman I’ve missed for the past five years.

Clark and Jon embark to a frozen wonderland to take down Starro’s second cousin, twice removed (aka giant purple thing with tentacles). Jon learns a new way to control his abilities and comes clean to his dad about the fate of poor Goldie. He isn’t out of the woods yet, though, as a moment of connection with a new friend spurs on his powers, threatening the secrets of the earthbound House of El. Meanwhile, a familiar image comes to life in the Fortress of Solitude who looks to challenge life for the Kent family.

The first issue of Superman post-Rebirth was an emotionally jarring and real exploration of life living a secret, especially for Jonathan Kent. Superman #2 brings the addition of adventure and discovery, even with its complications, while also capturing the essence of Clark Kent. Jon doesn’t have the same kind of focus of this issue, but he is the frame that provides the support for the story. Clark’s personality comes to the fore in his reservations about Jon and his powers, but also in how he talks to his son about honest and heroism. This issue marks a return to a Clark that his woefully human even as an alien on Earth, which provides a great context for Jon, his powers, and the role of Superman in the new status quo.

Peter J. Tomasi and Patrick Gleason have crafted a contained adventure story with enough emotional leanings and intrigue to drive this arc forward. Jon responds to situations much like a child would: fearful of consequences, hesitant regarding potential. He feels like a real little boy, and Clark’s responses to him help to enhance the emotional narrative surrounding Jon. While Clark is a little rough around the edges in protecting his family’s secret, he still holds the virtues of being the Big Blue Boy Scout and uses these values to help guide his son on the right path.

There’s a somewhat paradoxical youthfulness and gravity to the art of Superman #2. The wide eyes portray the wonder of youth, a departure from the previous issue, but Gleason, Mick Gray, and John Kalisz also illustrate intense emotion and action throughout the story. Gray’s inks add depth and darkness in all the right moments, and Kalisz colors are bright and hopeful, a stark difference from the overall tone of the issue. This art team encompasses the hope of the S-shield while also showing the pain of Jon’s self-discovery.

It’s nice to see that Superman #2 is an improvement on an already good story. This feels like a fresh start for Jon and Clark and done in a way that conveys emotions accurately. The values of the House of El and the Kent Family are in full effect, and the characters’ interactions with each other feel realistic. The next issue looks like it’s going to up the ante, so I look forward to what this series continues to bring.