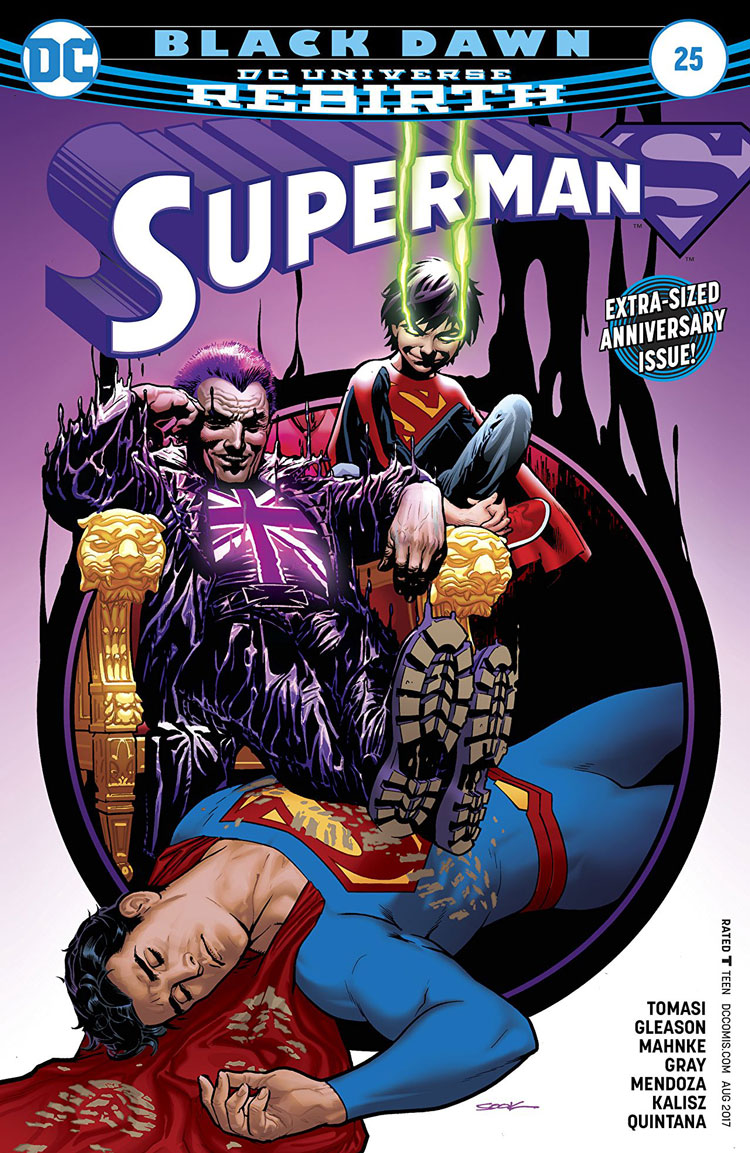 They say that the night is darkest before dawn but in this issue of Superman we discover just how black things can really get. Issue 25 continues and concludes the “Black Dawn” storyline as Superman and friends must battle his own son alongside Manchester Black. Although it has been a dark story, it continues to uphold DC’s new sunny outlook on life.

The “Black Dawn” story line is concluded in a very epic way. There is a lot going on to close out the final match between the Super-family and Manchester Black, but Gleason and Tomasi masterfully weave all the events to tie everything together. They have scripted a very epic battle in this issue and in fact it’s one of the best fights I’ve seen in comics in a while.

There’s some great scripting done for Superman’s inner dialogue as he fights his son. Even though the writing for Clark isn’t very verbose, it’s simple and heartfelt. Gleason and Tomasi handled the writing for Lois and Clark very well in this issue. They are not parents that are losing their minds because of what is happening to their son, but they have a grip on the entire situation. Of course, they are afraid for Jon and what he can do, but they know their son’s heart. They’re sure that in the end, the good in him will prevail.

The story ends really well with a pretty bow tied on the events and this is what the reader needs right now from Superman. Especially with the coming events of the “Dark Matter” story line and the “Doomsday Clock,” the Superman family needs to build on this foundation to survive what’s to come. The writers very successfully took the story to a very dark place and brought it out again with our heroes none the worse for wear.

In fact, if anything, this was a big step in Jon’s life which allows him to mature in his heroic identity. A regular child wouldn’t need to take such big leaps in their maturity but a super heroic child does. Jon has something that Clark didn’t have: super-hero parents and family to learn from. Superman has become more of a Superman family book than a solo title and this is a good thing because Tomasi and Gleason are writing it so well.

The artwork in this issue is executed beautifully. Mahnke took on a majority of this issue and this was an excellent choice. His style captures the turmoil that was writhing inside of Jon as he struck out against his family and the heroes that were fighting alongside of them. There are some excellent full panel spreads of the action as the battle rages on and Jon’s rage is represented so well.

Each of his movements exhibit such power and ferocity that it is easy for the reader to see and feel the direness of the situation. Mahnke captures some powerful moments in the battle and draws them dramatically. He also has done fittingly evil work on portraying Manchester Black which makes sense since he created Black back in Action Comics #775.

Something that the reader will find very cool is the melding of Mahnke’s art with Patrick Gleason’s art towards the end of the issue. There are a few panels where the two appear to be combined before the style switches back to Gleason’s style completely. It’s a great effect as the story wraps up. The return to Gleason’s family-friendly style of artwork is a breath of fresh air after the darkness that had taken over the past couple of issues. It brings a renewed appreciation for his artwork in Superman.

There is an army of inkers and colorist in this issue so it’s unclear who does what but everything looks great. Especially nice are a few panels that occur in a tree while the sunlight casts leaf shadows on the faces of a couple of characters. Beautiful work.

Overall, Superman #25 is another on point issue for the series. Although the beginning of the storyline was a little rough it evolved into a great tale for the super family. The creators have melded together action and love for a nice wrap-up for the storyline and continued growth for the family. There are some great moments that you shouldn’t miss if you are a DC fan and great formative moments that should become a part of Jon’s future character.