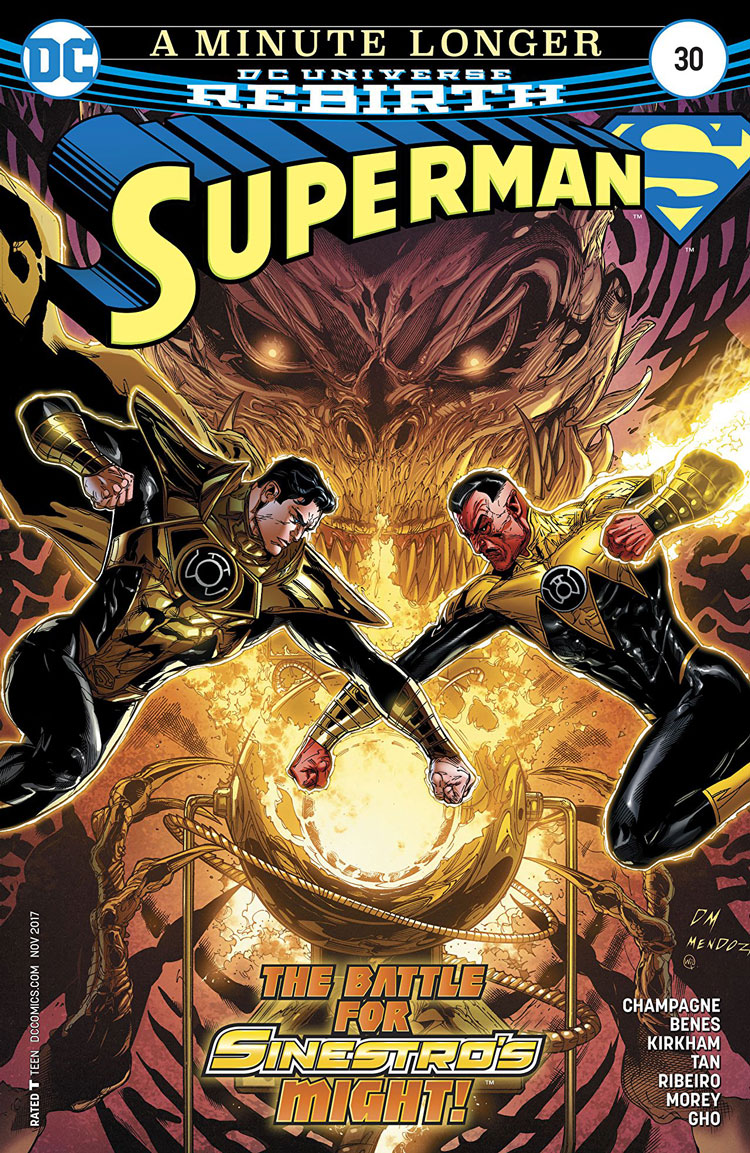 In a lot of ways, Keith Champagne really ‘gets’ what makes Superman an enduring and vital pop-culture character. Alas, despite this, the promise of the final pages of Superman #29 don’t get delivered in the way this reader had expected. While there are overtures made to seeing what a terrifying threat Parallax-Superman genuinely could be, this is undone completely after issue #30’s setup.

Which is, again, not to say that #30 is in any way bad. In fact, there are a series of pages which this reader feels encapsulates the most important aspect about Superman. Given the cover for #30 and the tempting promises #29 offered, the final delivery is a smidge of a let-down. But that isn’t to mean that important things are not said in the meantime.

Without spoiling too much, much of this issue is Superman and Sinestro having a very one-sided conversation about standard villain issues: what their intentions are, why they want to do what they do, and what they’ll if/when X happens. One of the best moments comes when Sinestro, for what appears to be ‘logical’ reasons, almost kills one of his subjects. Superman intervenes and thus sets up a very good question that books like Sinestro and Green Lantern have never really addressed in much depth:

Why do the people of Qward actually follow Sinestro?

On the surface there are ‘obvious’ answers that come from the depths of comic history, but Superman gives some interesting insights into his views of 1) why Qwardians have worked with Sinestro and 2) if that choice is all they’re anchored to as far as a future.

This is one of the best things about Superman, if and when he is used to his maximum potential as an inspirational figure: he has a perspective that is far, far less anchored to bias than other characters in the DC Universe. If Hal Jordan had been part of this story (snore!) and he had been the one to intervene in the life of a single Qwardian, I doubt, very much, that there would have been a conversation about what all of Qward’s future should be when their relationship with a space dictator is questioned openly.

But, hey, this is why Superman endures, right?

Another key factor in why this issue is actually fantastic despite the lack of real ‘action’ on the part of any involved characters (Superman, Sinestro, Parallax, etc…) is for one series of sequences where we see what Superman fears.

Some of this material isn’t new, i.e.: we have always known Superman fears that, as a finite being, he can’t be everywhere to save everyone who is in danger. But, a great addition to his character comes at his concerns for his son. I won’t spoil them, they’re worth the price of the comic, but they’re very good. Their addition to the lore of Superman’s psychology is, in my opinion, one of the most important additions to his evolution as a character since he and Lois finally got married.

There are a wide range of praises to be given for the art, chief of which is the attention to physical detail. In the first few pages of the issue, form and design are gorgeously rendered in a style that seems almost evocative of the kind of work Jim Lee does. The definition on the Qwardians and their lightning bolts is one example of the great work in display with the opening pages.

Tyler Kirkham’s work fills out the more philosophical sections beneath Qward and, as always, the work done on faces, shadows and ‘edges’ of things suits the environment well.

The back section of the book bears the weight of casting Superman in some of his most key sequences of the work, all of which is pulled off well. There are a series of pages that illuminate Superman’s inner terrors which are unlike anything else in the book and they work fantastic.

Also, as I often am want to do, I can’t say enough how great the color team is for this comic. Ribeiro, Morey, and Gho pour their efforts into every inch of this book and it shows. From the bizarre illumination of Parallax, the energy of Superman’s heat vision, and the crazy-amazing ‘terror’ pages. Everything has some kind of great quality to it that helps all the artists really pop.

While ultimately this wasn’t the Superman comic I expected, it was the right one for the narrative and for DC Comics as a whole.