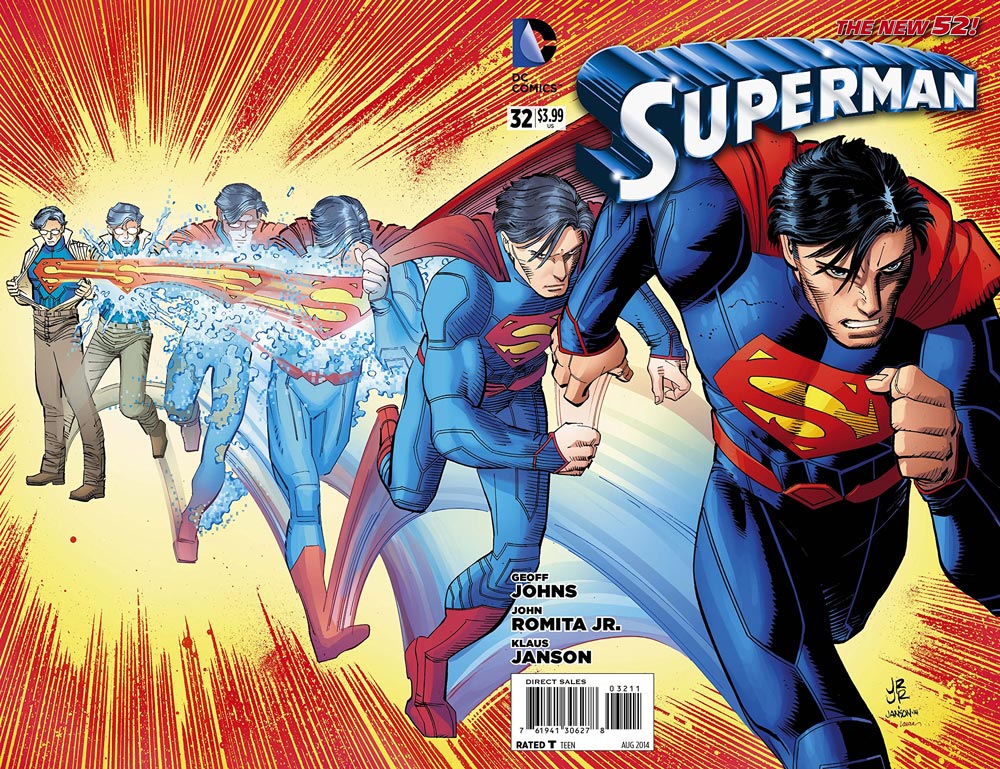 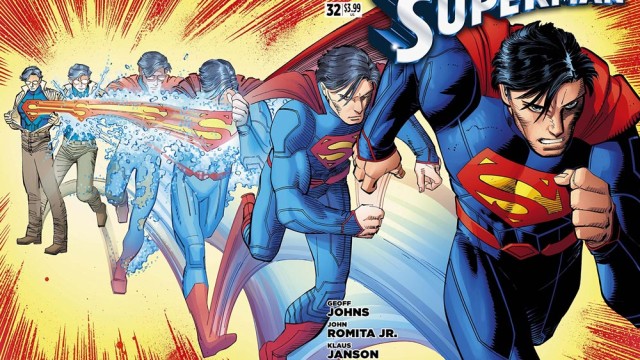 A couple facing imminent doom. A child sent to another world for safekeeping. Great powers. The last of his kind. And his name is… not Superman. Welcome to a brand new adventure for the Man of Steel as he encounters another hero not so unlike himself. Meanwhile, Clark Kent gets an offer to rejoin his friends Jimmy Olsen and Perry White at the Daily Planet that may be difficult to pass up.

Superman #32 is Geoff Johns’ triumphant return to the character fans have been clamoring for since his all too short run on Action Comics and the subsequent mini-series Superman: Secret Origin. Both series have come to be regarded as something of modern classics, and with good reason. Johns gets to the root of who Superman — and Clark Kent — is, and he does it again in quick order with this first new chapter.

Johns reintroduces us to a Clark that has all the hallmarks of an alienated being without actually feeling alien. This is a young man who, as Perry rightly points out, has separated himself from those around him, reaching out to a precious few — his lover Wonder Woman, his parents when they were still living. The sadness inherent in the character’s self-image as Clark permeates those scenes, but once the armor comes on, it’s all action. But in neither case is Clark or Superman timid or removed from humanity.

Quite the contrary, he wears his vulnerability on his sleeve as Clark and quickly takes charge as Superman. It’s a dichotomy that references the Silver Age nebbishness of Clark Kent a bit, but gives it a much more sophisticated spin. He is equal parts wounded by his place on Earth and the planet’s defender without any sense of doubt or reluctance. It’s a tough balancing act to accomplish what Johns has, but it defines Superman so deeply that it’s hard to imagine the character can work without it. And most of the time, he hasn’t.

Superman #32 also represents a major transition for John Romita Jr., of course — moving over to DC and Superman after a career of illustrating the Marvel Universe, most notably Spider-Man and the Avengers. There are some really brilliant layouts throughout the issue, not the least of which is the amazing wrap-around cover featuring Clark transforming into Superman. The details, however, don’t live up to the whole.

A significant portion of the issue is rendered in a strongly frenetic style, perfect for those big fight scenes, not so perfect for the talking heads of the Daily Planet. Any figure or face smaller than half of a panel loses description almost in their entirety, and while there are rare moments of gorgeous expression (particularly on the face of Jimmy Olsen), they don’t happen consistently. We lose a lot of definition in the drawing of the main antagonist as well, and while it’s clear from the start that Superman and his new “friend” are meant to be the main focus of those scenes, it’s still disappointing to not have a clearer picture of just what it is they are fighting.

As a warm-up to the DC Universe for Romita, Superman #32 has its faults, but the moments of beautifully subtle emotion we see here and there give me some reason to believe we could see tighter work in the months to come. Nevertheless, what we are getting in excess of expectation is a depiction of Superman’s character that recaptures the specialness of the Clark-Superman relationship without retreading any previous waters. Johns has clearly nailed down what it means to be the Last Son of Krypton in the New 52, and it’s neither maudlin nor bombastic, but just the right balance of courage and heartache. Kudos to that!