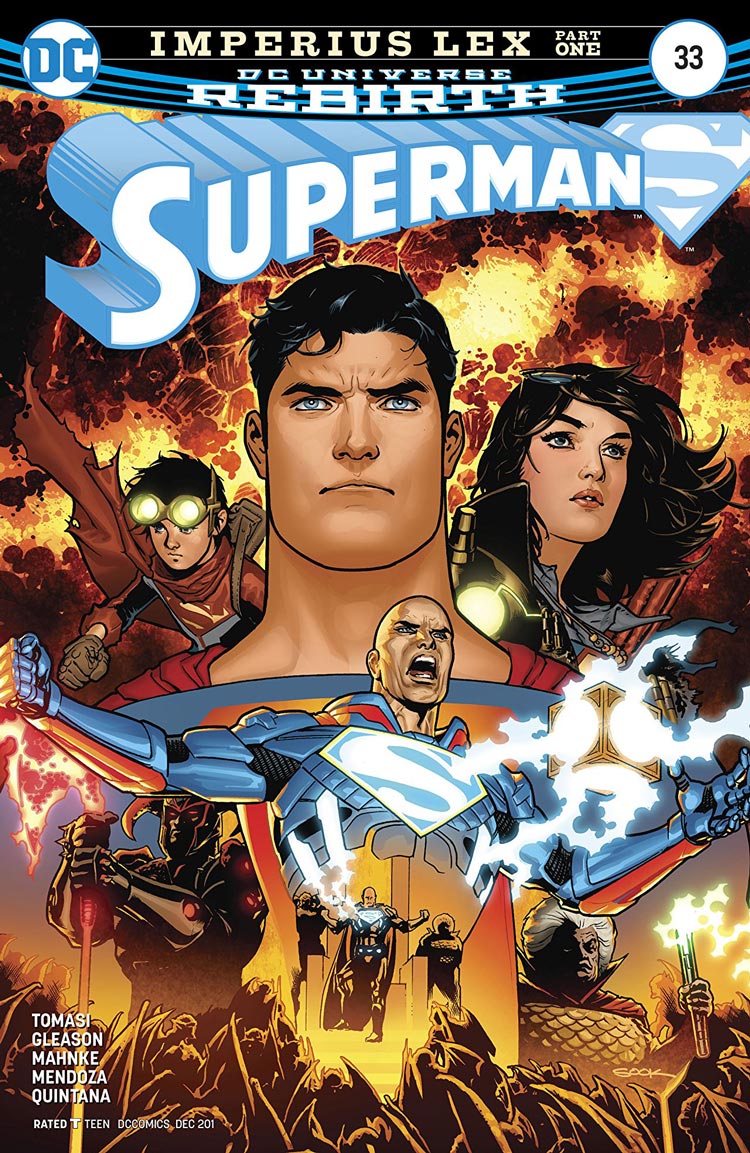 We’re all going to Apokolips whether we like it or not.

Some of the story arcs running through both Action Comics and Superman have featured the happenings of both SuperLex and the war-riddled planet that’s in constant state of war, suffering, and rebellion because of the shifting sides to the conflict.

We’ve seen many instances of Apokolips in the DC Rebirth landscape inside the two Superman titles, Mister Miracle, and the numerous Jack Kirby Specials spotlighting certain New Genesis and Apokolips characters. This time around, we’re getting into the dirt and grime-filled cosmic politics as the time has come for another ruler of Apokolips to be chosen.

Mahnke, Mendoza, and Quintana from the beginning cover a lot of ground with the scope of the pencils and inking respectively. From the raging fire pits, to some of the more recognizable villains on Apokolips, to panels jam-packed with energy, and visceral closeups of a world at war. The art doesn’t always land, with some of the characters needing heavier inking, but they do allow for the opening shots of what’s going on to be felt across just a couple of pages.

On Earth, it’s business as usual for the SuperTeam of Superman and SuperLex as they stop a robbery in progress. Gleason and Tomasi have been on the Superman line for a long while now and they land scenes to give it a classical feel in the new age thanks to Quintana giving the pages life and color. The lettering of Leigh rifles the pages with gunfire and the emergence of both of the Supermen gives way to the two being a buddy cop pairing that Tomasi and Gleason were known for in their Green Lantern Corps days.

Superman and SuperLex are providing the energy and vibrancy of a Superman title as they dismantle the robbers, though Mahnke and Mendoza give every panel a rush of momentum and purpose. The voices of the two Supermen are sound throughout, and the pair work well together with the screen time we get of them saving the day.

It’s not long before the Apokolips lifestyle that Lex keeps in limbo comes calling for him. The call to rule Apokolips may come back to bite Lex as he’s just coming around to the life of being a Hero for Metropolis and ally to Superman, as he’s proven over time in Rebirth. It remains to be seen how SuperLex will handle the royalty that is ruling the planet but the rest of the issue is dedicated to the Superman Family being just that, a family.

Tomasi and Gleason strengthening the duality of Clark, Lois, and Jon’s lives are good reminders to have as they enjoy a night stroll before being thrust into another cosmic adventure. The downtime segments aren’t to be disregarded in the grand scheme of things, though. While short lived, they tie together — Superman always being ready and able to defend and do battle with his family. We get a battle with Superman and Superboy letting loose on robots that double down on the progression of how this father and son work together in the field.

Leigh’s lettering is used to absolute perfection as the issue closes. Teleporting to Apokolips, calls for signature BOOM sound effects and a couple of PINGs. Throughout Leigh delivers on giving all of the sounds and motions their own identity. The classic pings and boom tubes all crackle with energy as the Super Family is separated and all three of them are tossed into different scenarios on the war torn planet. It’ll be sure to change all three of them as the Apokolips Saga of Lex Luthor continues!

As first chapters go, “Imperius Lex” is an entertaining first chapter that sets the stage for all the main characters to get down, dirty, and involved with all things Fourth World as SuperLex seems to be at a crossroads with what he’ll make with his destiny with the throne of Darkseid. Despite the pencils from Mahnke appearing rough around the edges in some places, it doesn’t deter the action or quieter scenes involving the Super Family. Quintana gives the book the solid ground of colors a Superman title always has.

“Imperius Lex” lays the groundwork for the next big Superman story arc with an interesting premise, stretching back to the finale of the Darkseid War and a more deadly take on the “fish out of water” trope with our Super Family.