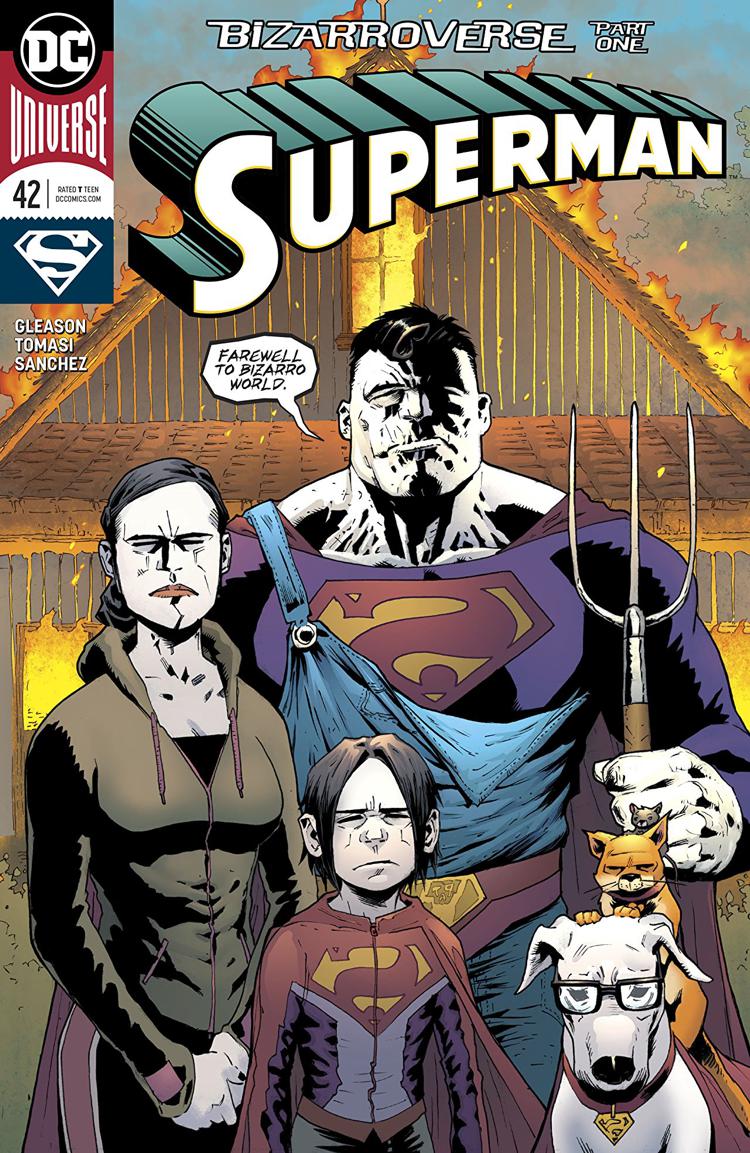 “bIZARROVERSE” END HERE WITH pART 1. wORSE YET, bIZARRO NOT NARRATE LAST WHOLE OF sUPERMAN #42. rEADERS NOT GET CHANCE TO UNDERSTAND bIZARRO IN bIZARRO’S OWN WORDS. rEADERS HAVE EASY TIME WITH STORY AND UGLY DRAWINGS FROM pETER j. tOMASI AND pATRICK gLEASON. aLEJANDRO sANCHEZ MAKES DRAWINGS MORE DRAWING-LIKE AND rOB lEIGH NOT MAKE SOUND.

It end there. Story not feature Bizarro family or Bizarro working and relaxing.

Everyone loves a good Bizarro story, but Superman #42 feels like it’s the start of a GREAT Bizarro story. Not only does it introduce Boyzarro (could there be a better name? No, no there couldn’t be), but it gives readers a glimpse of life on the Bizarro worm ranch – the Bizarranch. Loiz is there, as are the family pets and, well, a whole lot of Bizarro-speak, right down to comically crafted sound effects such as “TICKLE” and “BOING” from letterer Rob Leigh.

The opening chapter of a multi-part “Bizarroverse” arc, “Father of Boyzarro” is packed with visual gags, monstrously dynamic visuals, backwards thinking. Clearly a labor of love for Gleason and Tomasi, this story takes its time to show readers around a bit and uses the midway point of the comic to juxtapose the “real” world with the truly bizarre.

The story itself is fairly straightforward, but leans heavily into the likelihood that Bizarro, like Superman, could also be a father. Superman #42, therefore, takes a look at the relationship between Bizarro and his newly introduced offspring – Boyzarro.

Bizarro-speak can become a trap, luring readers to focus more on the syntax and the logic of the sentences and structure, dragging them out of the flow of the story. Tomasi and Gleason intelligently avoid that here, with the aforementioned juxtaposition, but also by keeping the general gist of the Bizarroverse portion of Superman #42 bouncy and relatively light. Bizarro’s captions are still immersive, but rely on the art to amplify the message, and given that Gleason has a hand in both, word and picture blend smoothly throughout this comic.

Subtle visual differences between the two halves of Superman #42 help readers distinguish between the two worlds, as Jonathan returns home for dinner and conversation with his folks, having spent the day “channel surfing” into other worlds. Canson paper type texture in the backgrounds for the Bizarroverse tale give the story a rustic sheen that hints at the dusty, flaky skin of the Bizarro-folk. Sanchez’s colors carry a little more green with them in the Htrae scene. On Earth, the colors get brighter and more saturated, particularly with reds, yellows, and blues popping in intensity. The backgrounds don’t have a finish to them, but the intensity of the colors would make any texture a moot point.

Superman #42 is less a Superman story (Clark/Superman appears on two pages) and more of a “World of Superman” story: spotlight on Bizarro issue. And it works wonderfully. Bizarro has had a bit of play across the DC Universe in the last half-decade or so, but he always seems to be a fan favorite. Putting him front and center in a story by the current fan-favorite creative team is as close to a no-brainer as possible, and the creative team exceeds expectations.

Superman #42 ends with a big “GOOD-BYE!” that would be an awesome one-page story all by itself, thanks to the masterful work of Gleason, Tomasi, Sanchez, and Leigh. This issue has nineteen more pages though, and is only the start of “Bizarroverse.” Down, down, and nearby!