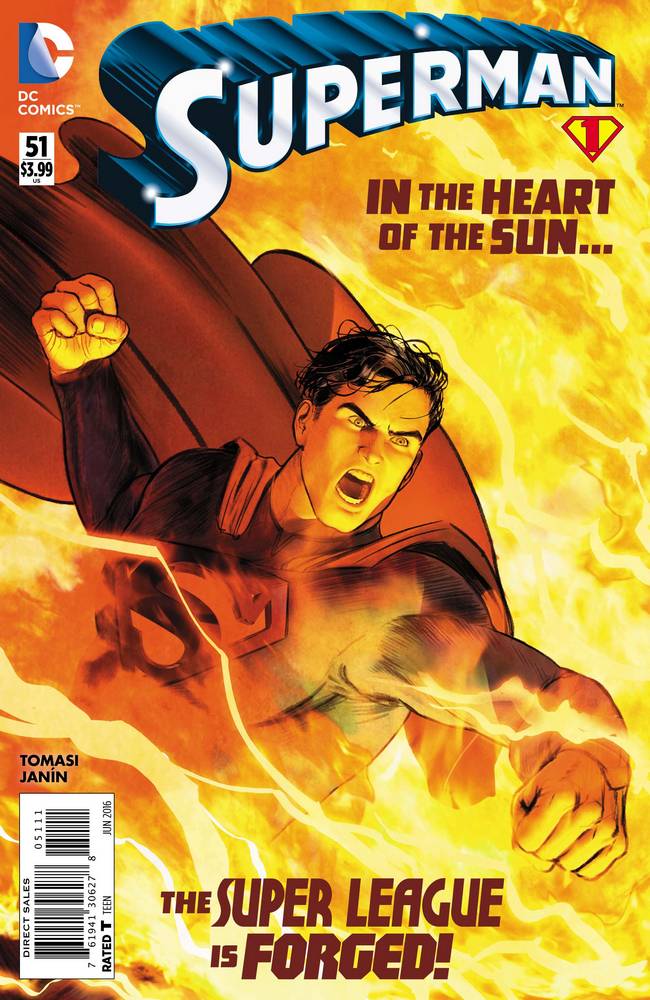 The first thing I noticed on Mikel Janin’s cover for Superman #51 was the shield-numbering (like the triangle numbers from the Death of Superman era), right under the logo and above the cover blurbs. To me, that indicates an attempt at consistency, with a vision going forward, but to the world at large, it also signifies the first chapter of the Super League story.

I’m going to spoil this, which I suspect won’t surprise anyone, but the Super League is not formed by the end of Superman #51. And, amazingly, that doesn’t matter a darn bit.

The issue opens with a strikingly handsome portrait of Superman, looking out to the reader, uttering the words, “I’m dying.” And from there, Peter Tomasi and Mikel Janin celebrate the Man of Steel, packing more super, fantastic, and heartfelt moments in twenty-two pages than I can recall in the entire New 52 run. Admittedly, I haven’t been the most devout Superman reader during the New 52. Had the run packed more of what we found in this issue into the series as a whole, I definitely would have a few more Superman comics from recent years in my collection. This issue is full of character, heart, and emotion.

Tomasi puts complete faith in Janin from the start, and Janin proves to be worthy of that faith, readers’ faith, and readers-who-don’t-yet-know-that-they-really-should-be-reading-a-Superman-comic’s faith. Having made his mark with titles like Justice League Dark and Grayson, Janin shows readers the world around Superman, and Tomasi gives him every opportunity to draw all of Superman’s world – from Lois Lane to Lana Lang to a montage of Superman rescuing a plane, saving a falling construction worker, fighting a giant robot, combatting a meteor shower, halting a runaway train, and even rescuing people from a burning building. And Janin fills every panel full of emotion and detail, drawing and coloring.

Readers accustomed to Janin’s work undoubtedly know of his use of tones and washes, but in this work, where he is coloring himself, the end result is much more painterly. The quieter, Amerciana-infused moments, like Clark and Lana visiting Clark’s parents or the lilac-hued flashbacks of the childhood friends are purely stunning. Janin could fill the twenty-two pages with his drawings of Lana and Clark chatting, and it would be a sight to behold. Instead, Janin shows readers he can draw anything, and he does – from backyards in Smallville to science fiction-inspired laboratories. And it’s all gorgeous.

The art alone makes Superman #51 a brilliant book, but juxtaposed with recent developments surrounding the original orphan from Krypton, the work Tomasi and Janin deliver is even more impressive, especially as it reminds readers of both the “super” and the “man” while checking in on all things that are important to the Man of Steel. Despite not showcasing an epic battle with a fitting foe, Superman #51 brings almost everything I’d like to see in a Superman comic. Knowing that Tomasi will be writing Superman’s adventures post-Rebirth, it looks like the “S” just might stand for hope once again.