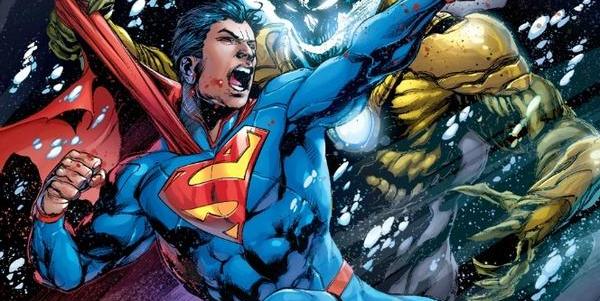 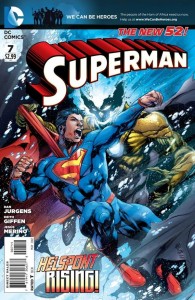 Superman is my favorite character that I don’t read. I collected every appearance from the mid-80s to mid-90s but tuned out a few years after Death of Superman. My Superman was, and is, Byrne/Ordway/Jurgens. I was excited most about Superman in the New 52. Gone would be the bazillion other Krypton survivors, a fresh take with a clear starting point. And then I hated it. Both books, yes, I tried Action every second issue desperate to like it and I still don’t.  In six months, I think the only glimpse I got of the Superman I want and recognize was in Swamp Thing #1 for a couple of pages.

From page one of Superman #7, I knew he was finally back: A Jurgens splash page of Superman saving lives and protecting Metropolis. Leaving before anyone can thank him, back to pretending to be a nebbish reporter. My Superman has finally joined the New 52. This issue, the debut for the new creative team after the Perez hiccup, ties closely to the newly integrated Wildstorm books and characters, specifically Stormwatch and Grifter. We get a look at the New 52 Helspont  and start getting a tease for what he is planning. And more importantly we get a look at a regular day for Clark and how he relates to those around him, in and out of costume.

The art by Dan Jurgens is a lot like Dan Jurgens doing Superman. I am quite biased on this so I think it’s just fair to say that if you did or didn’t like his Superman before, this is like that. I do like how he is treating the new costume.

I wear my bias on my sleeve. This is the book I have waited for since many years before the relaunch. A Superman who is a hero, a role model, a man struggling with two identities, and ultimately a leader of heroes.

My Superman doesn’t say “what can you do?” My Superman says, “Stay behind me. I have this!”, and now he’s back.

The Verdict: A completely unapologetically biased 9.0/10

Keith is the co-host of the podcast We Talk Comics.