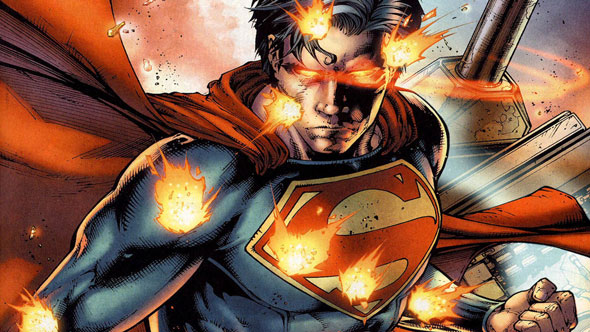 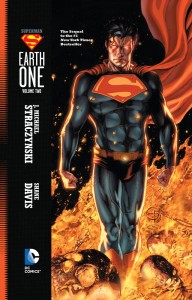 DC Comics continues its mass-market series of graphic novels featuring its most recognizable super-heroes with a second volume of Superman: Earth One. Set in a decidedly more grounded world than the monthly continuity, this 136 page sequel to the 2010 book drops Clark Kent into his role as a journalist for the Daily Planet and sets his alter ego against the new threats — both super-powered and not — in the form of the Parasite, a third world dictator, and a master villain reintroduced in a very unique way.

This is not your granddad’s Superman, however, as a young Clark begins to make his way in the big city, with new love interests, challenges, and a decidedly less certain moral compass than we’re used to seeing from the Big Blue.

What is absolutely certain in this volume is the masterful artwork presented by Shane Davis. If this is the quality of work that results from two years of planning and execution, then I can only regard every minute as time well spent. Davis’ Superman is lean and mildly lanky, but no less imposing than more traditional representations of his physique. He portrays the Man of Steel as consistently hovering above the ground when in costume, and frequently employs the simmering glowing red eye of his heat vision, setting Superman so decidedly apart from Clark Kent in a way I can’t help but marvel at.

Clark is slightly nerdish, but still maintains a certain coolness and everyday feel to his look, neither oafish nor too suave in his mannerisms. Thoughtful detail across the board is what makes this book genuinely one of the finest shows of artistic talent on the shelf this year, in fact, with every locale, article of clothing and movement having a palpable realness about them. Davis’ Parasite is sufficiently grotesque and commanding, and maintains credibility over time even while shifting from normal man to hulkish monster. All in all, this is a truly magnificent addition to the Man of Steel’s artistic canon.

Straczynski’s writing has many moments of absolute delight for me. His Clark Kent exhibits an emotional vulnerability that reads as genuine by comparison to many iterations of the more meek side of our protagonist over time. In particular, a vignette about Clark’s first childhood pet and the loss he experienced with his death was extremely touching, capturing his great capacity for love perfectly.

The overall pace of the graphic novel is brisk, but not forced, and we really get the sense of a young man making his way in the world without exactly knowing what that means yet. Lots of future seeds are being planted here, from Lois’ investigation into Clark’s past to the government’s desire to put Superman down, all of which lead me to believe this series has a long, viable life ahead of it.

However, where Straczynski falters significantly for me is in the clumsy injection of sexuality into the story. I absolutely understand the desire to produce a more adult, sexually complex hero for the bookstore market. This novel is not intended for all ages, and focuses its marketing reach squarely on the shelves next to the Twilight saga and Fifty Shades of Grey.

I am, in fact, very curious to read a take on Superman that really puts his intimate life on the page and treats it with the sophistication that Straczynski exhibits in the rest of Clark’s personality and motivations as a hero. But that isn’t what I feel I got here. His Lisa LaSalle (I do love the double L, though!) is one-dimensional, objectified to the point that she is revealed to be a part-time prostitute in a throwaway line — although what she does with the rest of her time is never made quite clear either.

The depiction of “the talk” Jonathan has with a young Clark could have been a sweetly awkward moment between a father and son. It instead became a strange interlude completely overridden by use of the phrase “Man of Steel, Woman of Tissue Paper,” a metatextual reference to a somewhat juvenile 1971 article about the dangers of intercourse to the fragile, faceless woman in Superman’s life.

Across the board, the women in this book (and there are happily quite a few engaged in moving the plot along) don’t exhibit a fraction of the complexity of character shown in the main protagonist, the male villains, or even Clark’s front stoop acquaintance. And that’s a pretty serious failure, in my opinion, for the mass market this book intends to target.

The potential for a really challenging and entertaining piece on Superman’s sexuality is intriguing, and this series would be the perfect vehicle for such, but the end result does not match the honesty Straczynski seems to be able to write into the rest of Clark’s character. That said, for a solid read into Clark’s conflicting emotions about his place in the world, and an undeniably gorgeous book, Superman: Earth One continues to merit a spot in my read pile.