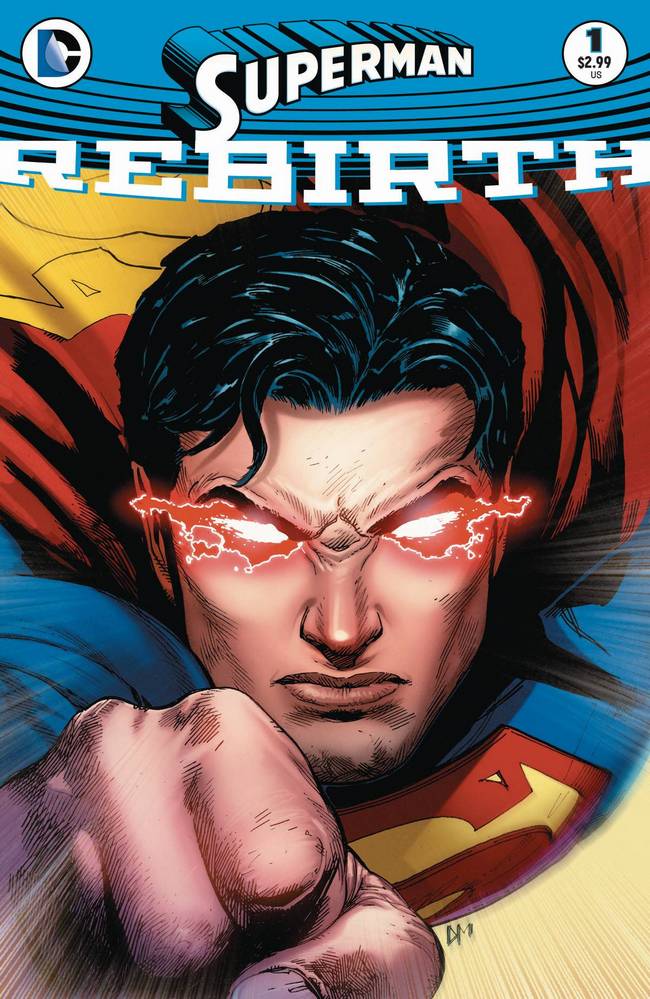 Naturally, Superman is one of the first characters to fly onto the rack for DC’s Rebirth event. Written by Peter J. Tomasi and Patrick Gleason and drawn by Doug Mahnke, this comic gives readers a nice recap of the history of the man currently wearing the S-shield. It also opens up a mystery from the concluding chapter of The Final Days of Superman that some sharp-eyed readers may have noticed before closing the back cover.

In the history lesson, we see Superman’s fight with Doomsday told in widescreen double-page-spread brilliance. The explanation of the confrontation stretches for four pages beyond that, giving Mahnke plenty of space to visually pummel readers with stunning detail and remarkable craftsmanship. No artist in comics today can draw a vertical panel with as much information as Mahnke does, which he does more than once and even varies up the dimensions of those panels, giving readers a wide array of gorgeous art to absorb. Jaime Mendoza inks the entirety of Superman: Rebirth #1, giving Mahnke’s work consistent outlines and weight, but throughout the issue Mendoza employs different shading techniques to provide various cues and evoke specific emotions.

Colorist Wil Quintana must have had a grand time with this issue, as the colors in Tomasi and Gleason’s story run the full range, from the glowing heat vision emanating from Superman’s eyes to the chilly ice blue of the Fortress of Solitude. Superman’s red, blue, and yellow garb, Lana Lang’s ginger hair, even the glowing sunset as seen from Metropolis’ Centennial Park – all of these are grand and glorious samples of what comic book coloring can and should be. Quintana even leans into lighting cues from Mahnke and further augments the drama of every scene in this comic.

The story is lean through the history lesson, giving Mahnke’s art plenty of room to breathe as well as to narrate the events of Superman’s conflict with Doomsday. Rob Leigh positions the captions nicely and gives them a rich blue tone to indicate their Kryptonian speaker. With locations and word balloons Leigh provides visual cues and variety, giving readers plenty to digest throughout the issue.

Before and after the history lesson, Tomasi and Gleason provide plenty of dialog to bring readers up to speed. At one point, the dialog turns in on itself, threatening to become overly melodramatic as Superman and Lana Lang play a quick round of “Questions Only” while attempting to agree on the best course of action. The two characters are the only present-day DC Universe characters that appear in this comic, and their conversation is both informative and comfortable. At times beyond the “Questions Only” bit, the dup could easily just give up and storm away from one another, but each recognizes a spark of the other that they know, which keeps them focused and genuine.

Superman: Rebirth #1 isn’t exceptionally action-packed, but that doesn’t keep Tomasi, Gleason, Mahnke, Mendoza, Quintana, and Leigh from delivering plenty of action. This comic book sets the table for stories to come both in Action Comics and Superman, as Tomasi, Gleason, and Mahnke will all contribute to the latter. It also extends the bridge established in Superman #52, providing readers with a precise and succinct “What Happens Next” from that issue’s conclusion. Like Keith Callbeck mentioned in his Rebirth assessment, “‘my Superman’ was over there.” “Over there” for me has become Superman: Rebirth #1. It’s great to be enthused about Superman once again, and this comic gives readers a lot to look forward to.