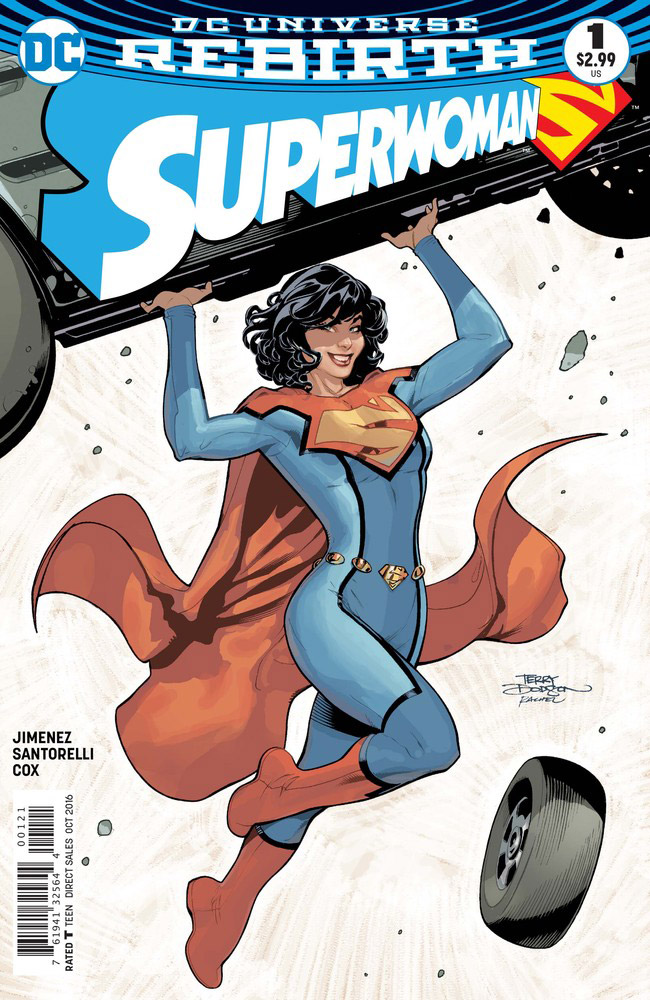 Phil Jimenez certainly cannot be accused of decompressing his story.

By the seventh page of Superwoman #1, readers have met Lana Lang, been to her farm in Smallville, followed Lana to Metropolis, learned about Metropolis’ 375th anniversary celebration, gotten a tease about the resolution of the Doomsday storyline from Action Comics, checked in with the Daily Star (the official competition of the Daily Planet), and witnessed the mind-numbing vastness of Lex Luthor’s The Gestalt, a vessel of his own design, crafted to assist with protecting the city. Whew. That’s just the first seven pages of an (pardon me) action-packed issue.

By the end of the issue, readers have a whole new appreciation for Lang, Lane, and Luthor. There’s a new threat in Metropolis, and, possibly, an even greater threat in the wings.

And that doesn’t even touch on Jimenez’s mind-boggling level of detail in the artwork. Lugnuts on the wheels of the pickup truck, rust divots on the mailbox, even the subtle textural difference between the painted wood of the barn and the sleek siding of the farmhouse – all of these are details Jimenez packs into the first five panels of Superwoman #1.

Before presenting the entirety of Metropolis, a hulking aircraft carrier and a half-dozen fighter jets buzzing around the cityscape. Jimenez shows readers the control room of the Daily Star, the underside of the McGuiness Bridge, and the wreckage a conflict between super-beings can create. A stickler for details, Jimenez draws a wide array of diverse people, different fashion choices, and a stunning assortment of expressions.

Inker Matt Santorelli and colorist Jeromy Cox enhance the amazing visuals throughout Superwoman #1, adding depth, temperature, emotion, energy, and even time, as a subtle yellow frame designates flashbacks around panels prior to the “now” designation of this issue. There is no shortage of opportunity for effects in this issue, and an equal number of mundane settings, giving Jimenez and his visual collaborators ample opportunity to showcase their talents in a wide variety of settings.

Add in sublime lettering from Rob Leigh, who sometimes has more to work with than not, but manages to preserve the stunning artwork nicely. Leigh dials up some transparency for the sound effects, further helping integrate word and image in this comic. The end result is simply a beautiful comic book, as Superwoman #1 makes a real strong case for one of the most visually stunning issue of the week, if not DC’s entire Rebirth campaign.

Jimenez balances character and crisis, giving readers so much insight and adding depth to Lana Lang beyond, “I grew up as Superman’s best friend.” Lana is the reader’s gateway into this world, and she’s also our human anchor. Superwoman is another character sporting the S-shield and a dazzling array of powers to match, but Lana treads the line separating narrator and guide, giving readers plenty of insight along the way.

Through Lana, Jimenez also supplies readers with comic book science, bits of humor, a reference to “The Jerk of Steel,” and yet another surprise that completely alters the complexion of this series – in the first issue!

Jimenez FILLS this comic with adventure. Each page brings a new reveal, a wonderful application of super powers, or a character snippet. Lana Lang and Lois Lane paired together is always a solid list of ingredients for entertaining storytelling, be it character development or ongoing plot assembly. In this case, it’s both and then some. Jimenez slips in some nods to the original Superman movie, reminding readers of the awe and wonder some of us felt back in the day before every other month brought us a new superhero film to the silver screen.

And that is Jimenez’s most important contribution to Superwoman #1: heart. By opening the story with readers at Lana Lang’s side, Jimenez stresses the humanity required and present in superheroic situations, giving readers plenty to relate to. Superwoman #1 is a comic firmly entrenched in the DC Universe, but provided ample room to grow.

This is what a first issue should be and it promises readers that it’s going to deliver on everything a comic book should be. Jimenez and crew give readers a comic worth every penny of the cover price, filling Superwoman #1 with plenty of action, surprises, and teases as well as a killer cliffhanger. When DC made their announcement about this series they had my attention and my wallet in my hand. With this issue, I’m strongly recommending you get your wallet out too. Superwoman #1 is a wild, entertaining read in the tradition of great summer comics.