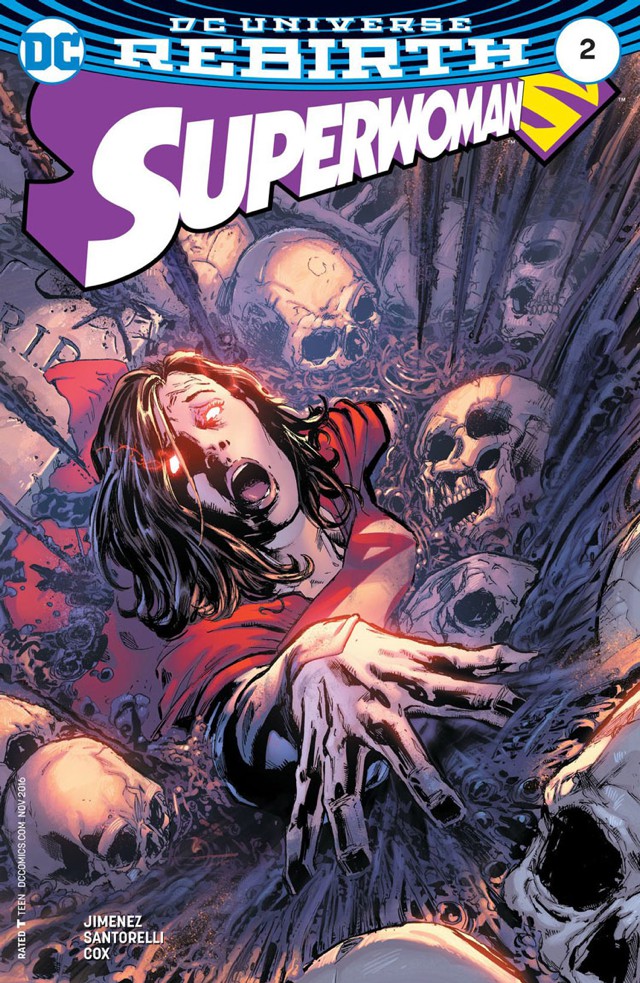 Lana Lang didn’t want to be a Superwoman, but when Lois Lane asked her to suit up, she answered the call of duty. Now that Lois is gone, and Lana is starting to experience the same symptoms as her friend, the question remains: who killed Superwoman?

There’s something to be said for comics that you can’t finish off in 30 seconds, man.

Rebirth is a lot of things to a lot of different readers — and generating a surprising amount of good will from fans new and old — but for me, the moments that get me are when a book feels like it’s returning some of the richness to the DC Universe. That’s taking a bunch of different forms, and as no two of my favorite books are quite alike, that only adds to my sense of the richness I am savoring.

Superwoman is tackling that phenomenon in perhaps the most straightforward way, and more so in issue #2 than in #1. For the first time in years, I feel like Metropolis is a real place with real people inhabiting its streets and high rises. I feel like there’s a burgeoning of personalities surrounding our heroes. And more than that, I feel like there’s a genuine attempt to treat each character like a living, breathing human in all their glory, impatience, courage, and fear.

And it’s a testament to Phil Jimenez’s deep understanding of what makes character relatable and feel “real” that we get the superior level of dialogue and illustration we see here. Lana Lang has never been a favorite of mine, and yet I feel like I instantly know what makes her tick. John Henry’s always been a stoic friend and genius inventor, but until this issue, I never quite captured how careful he is with his paternalism and how respectful he is of the women who surround him.

Maggie Sawyer’s forthrightness, Natasha Iron’s youthful (but also genius) enthusiasm — even Lex Luthor’s Donald Trump-esque bravado, simmered down into something somewhat relatable? — all of the above have been packed into a 20-page comic that has the same narrative room for two cops to express different reactions to Steel’s presence and for the Atomic Skull to rip apart half of Metropolis. The balance Jimenez strikes between the traditional super-hero model and the interpersonal character study is just astonishing.

All of which, of course, is backed up by Jimenez’s trademark intricate style of penciling, elaborated upon by Matt Santorelli’s sharp inking. The artists are bringing precisely the same feel Jimenez brought to The Invisibles nearly two decades ago — but with so much more finesse and sophistication that comes with storytelling experience had since.

Pages are loaded up with thumbnail panels and sly little moments that Jimenez slides into the overall layout, giving us a sense that this is a living, breathing world our heroes occupy. Jeromy Cox’s colors keep Metropolis — and the electric Superwoman herself — feeling luminous and bombastic, without leaving behind the sense that these fantastic elements are grounded in a real city with human beings of all races and colors occupying it. The entire experience is rich and complex, full of narrative and physical depth, which only serves to increase the tension surrounding the stakes Lana and John are now facing in Lois’s absence.

And it’s also a hell of a lot of fun to read.

Honestly, I feel like I’m getting the best of both worlds with Superwoman — the artistic prowess of an artist who has gone from impressive to extraordinary, packing in page after page of story detail, and a feel of interpersonal drama and old school narration that I haven’t seen in great abundance since I was a kid. What I loved about DC Comics is back, without having lost so much of the gains in-between. That’s damn impressive, especially in a package that is mixing up the Superman mythology in new and exciting ways I can only pretend to anticipate as the months go on.