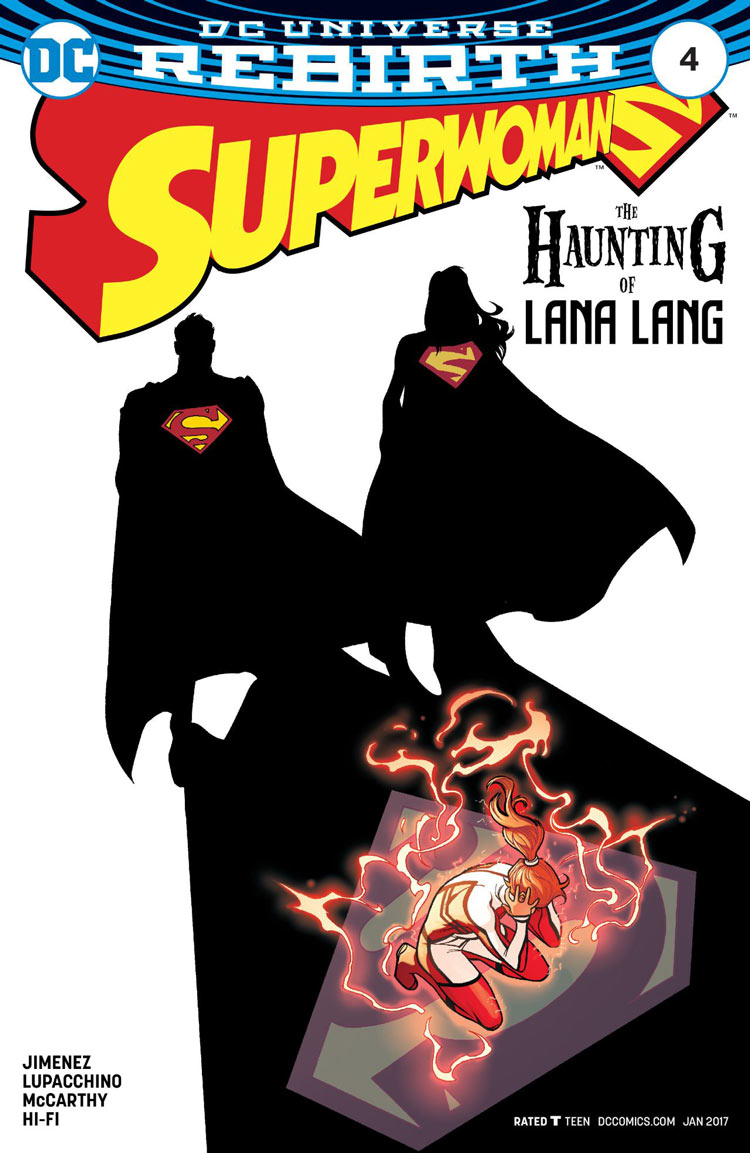 Hmmm. This is interesting.

With Superwoman #4, we get a bit more from the perspective of our Superwomen (yes, women) with Lena Luthor taking a bit of a backseat until the end. What does it mean to be a hero and know that it could be killing you every minute? Especially when you’ve already lost so much and have seemingly put your life back together as Lana Lang has.

Jimenez takes us through what Lana has to lose pretty effectively, reminding us of the vibrancy of her new extended family (John, Natasha, the newly arrived Traci 13, even Bibbo and his kids) and the career she’s cobbled together. As Superwoman, she’s made a name for herself in a very short time. It’s all coming up roses, except for the death part.

So, it’s poetic that so much of the issue takes place back on the farm — in Lana’s mind, the life she has replaced, perhaps not so convincingly. Jimenez is careful to leave behind clues to Lana’s self-questioning without ever making that behavior a debilitating weakness for the character. We talk a lot about “strong female characters,” but part of that exhibition of strength — on the comics page and in the women I know — is perseverance. In short, self-doubt comes second to imminent need, and Lana exemplifies that.

I also appreciate the handling of Lana’s medication for anxiety and the discomfort she expresses in relation to it. This is not an addiction story, but one that reflects what many of us who function more effectively on medication for depression, anxiety, or mood disorders experience in relation to family, friends, employers, and more. It is a gut-wrenching thing at times to admit that one is reliant on help, particularly when so much of pop culture refuses to believe anxiety or depression is even a physical phenomenon.

The reappearance of Lois Lane is, of course, a conundrum, and it does throw so much of the narrative into question — and not just in a most literal sense. Did she even die? And if she didn’t, if this is simply the evolution of the powers the two of them share, then what does Lana have to lose anymore?

I reject the idea that Lois is some sort of figment of Lana’s imagination. Where the story moves beyond that, I honestly have no clue, but it’s clear from her return that Jimenez is invested in the same relationship we saw between the two women in Superwoman #1. How that manifests itself going forward is the question.

Is Lois existing strictly on a higher electrical plane? Is she tied to Lana through their powers? Can she reincorporate — or at the least, reappear on the standard light spectrum? Is she ultimately the Superwoman Blue to Lana’s Superwoman Red? I’m probably just going to keep guessing indefinitely.

Emanuela Lupacchino’s turn at bat this month is lovely, with clean line work and strong layouts for what was primarily a talking head issue. In the more dynamic scenes, I can tell she’s ready to break out with full force action, so hopefully the stars align to match issue to artist along those lines a little more carefully. While I love Jimenez’s action scenes as well, I have to admit craving a little more detail in an issue without that slam bam action, and that’s really Jimenez’s artistic forte more than Lupacchino’s.

That said, Lupacchino’s Lana just shines in every scene, getting across that sense of the everywoman that Lang has always been meant to project, going as far back as her original appearances. And the immediate look for Traci 13 as she appears out of a burst of magic is just A+. I can’t wait to see her get into the mix of things, alongside girlfriend “Don’t call me Lady Steel.”

Yeah, what will Nat’s name be? Hmm.

At any rate, Superwoman #4 is another great installment that may only fall short of the previous three issues for its position in the ongoing narrative. A lot had to be introduced and explored in this issue, most of it interior to the characters, and that slowed down the pace a bit. Nevertheless, what this issue means for the future of Lois Lane and Superwoman in general definitely has me tapping my foot waiting for the next installment.