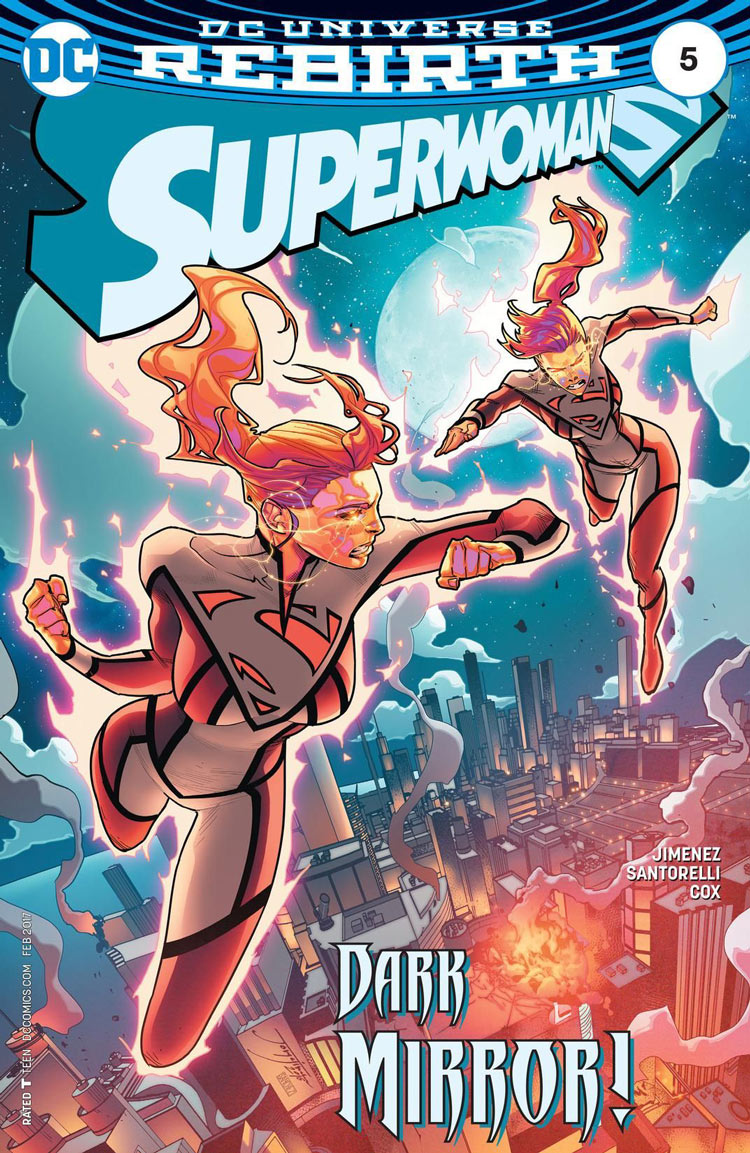 The rise of Ultrawoman is throwing a dark shadow over Metropolis. It’s up to the last few remaining forces that haven’t been culled by Lena Luthor to put an end to her scheme and the road is not paved with good intentions — or seemingly dead versions of your friend giving you advice.

Lana, Steel, the MPF, and company are on the ropes with Ultrawoman and her Bizzaro clones taking the fight directly to the city of Metropolis and it’s people being literally caught in the process. Jimenez allows for some fleshing out of Lena Luthor herself in the early and later pages and the hype surrounding her transformation into a self proclaimed God is evident. It’s something chilling about both her own and Lana’s narration of her — and how far reaching her machinations are being taken.

Her attack, while Metropolis based, spreads far and wide with simple goals for her army to carry out…”Gather. Obtain. Destroy.” The focus then shifts to the surviving citizens of Lena’s attack and their various attempts at preventing her assault from spreading any further. Jimenez packs in a lot of dialogue and speech bubbles in it makes the issue a hefty read for sure. No matter how big or small, Jimenez let’s a diverse string of characters have their say in how the Ultrawoman attack effects them and displays all fronts of how they’ll fight back.

Lana and Steel — and by association Lois — are on the defensive attempting to piece together how to put an end to Lena’s reign of terror and battling ghosts of your dead friend and juggling their current situation doesn’t make for a Lana Lang that can keep her head on straight. Our main heroine is under duress to say the least, not being able to take the fight directly to Ultrawoman is wearing thin for her and it’s up to other heroes to take up the fight in their place.

Traci 13 and Natasha Irons put up a valiant effort against the Bizzaro clones but to no avail. They save the citizens but the injuries mount up for our heroes and both Lana and Lena begin to suffer the fallout of their choices that have been in motion since issue #1.

No one person is beyond their choices, no matter how cold and calculated or valiantly they may seem. Lana ends the issue with a rash decision that is ramping up the battle for the citizens of Metropolis and with the stakes ramping up for both Ultrawoman and Superwoman, the finale to the arc should deliver a personal blow to all of the characters involved.

Jimenez, Santorelli, and Cox have illustrated a intricate experience for reading Superwoman. There is always something to go back and notice in the backgrounds of the pages. From faces outlined in Ultrawoman’s cubes to the design of her suit that graces the single page opener of the issue. The art team ranges from super suits to citizens in arms to Bizarro clones the diverse cast they have to work with allow for different sensibilities and creeds of characters and everything blends together to deliver a unique take on what it means to be in the Superman line of titles.

The characters exude emotion and the expressions are up to par for what the scenes call for. Lana shows all the emotions and irritability of someone nearing their wits end and yet continues the fight for what’s right. Ultrawoman is larger than life with the technology at her disposal and retains the human emotion with only a holographic form of a face to show for it. The colors are vibrantly sound throughout and work to their advantage whether Jimenez is toying with panels and slowly builds up Lana crackling with her red energy or expressing the more human sides and quieter moments of the ongoing battle.

Superwoman is a title that stands uniquely together and apart from the Superman line of titles and as far as ongoings go, has done great work at fleshing out another corner of Metropolis and its citizens, both super powered and non. Jimenez and company are nearly completed with the opening arc of Superwoman and the road to saving the day has paved with hard choices, good character moments, and an ending that could change everything for our leading ladies.