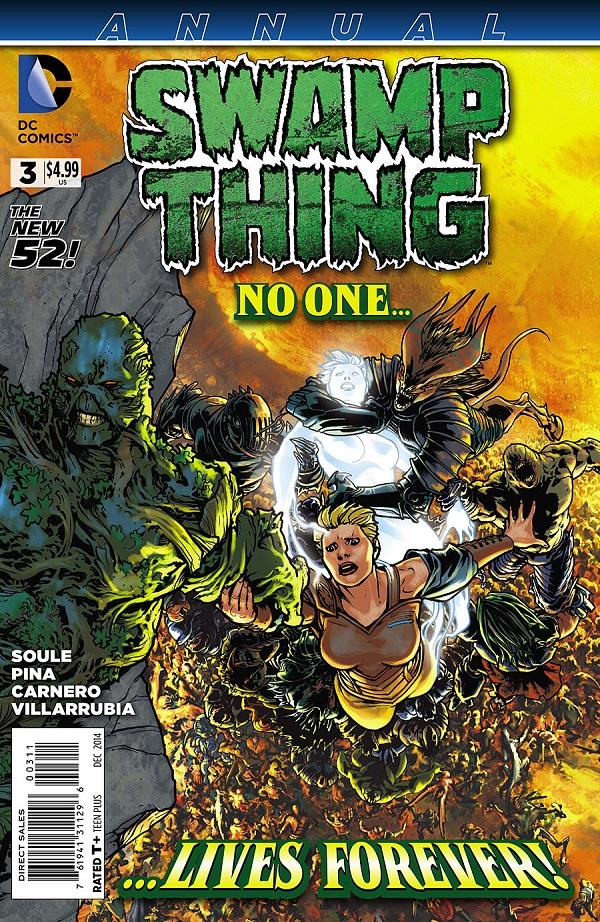 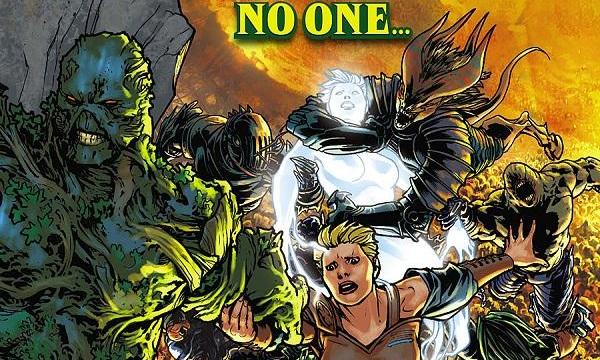 While it’s always sad to see a character die, I must applaud Soule and company for providing us with a relatively lighthearted and fun comic issue in the face of Capucine’s inevitable passing. This death should not be a surprise to anyone, as she has stated in previous issues that her time was coming to an end, but the mixture of fun craziness, strong camaraderie, and the glorious reintroduction of one of my favorite characters, Etrigan the Demon (the rhyming one!) makes for a great read.

The introductory scene sets the tone for the issue as we open to Swamp Thing and Capucine fighting some mysterious demons that can’t stop rhyming to the word “green” – spleen, mangosteen, lima bean, etc. – a sign of the coming danger. Though unharmed from battle, Capucine collapses and explains how she is running out of time. From here, the issue follows her remaining time and the last battle to save her body from wickedness.

One of the most successful elements of this issue is the integration of short stories to give an amusing insight into Swamp Thing, reintroduce Etrigan, and explain Capucine’s background. Sometimes using short story flashbacks can remove the reader too much from the present, but these were successful at telling the story in a way that both the other characters and the reader can broaden their knowledge of Swamp Thing’s world without being fully removed from the story at hand. And while the Swamp Corn story might not be the most important tale to tell, it adds another layer to the friendship between these characters and builds upon our understanding of his inner humanity.

To me, the highlight of this issue might be the return of a rhyming Etrigan the Demon. When Demon Knights was announced as part of DC’s New 52 relaunch, I couldn’t wait to see what kind of adventures Etrigan and his counterpart Jason Blood would get into. Alas! They decided rhyming was not to be part of this new character and my interest was quickly lost. To see him back in full rhyming force and trying to exert his trickery on Swamp Thing made the issue feel important but also light and comical, despite surrounding the events leading up to Capucine’s death.

Between the regular art and the short stories, this issue featured five artists and multiple colorists. Typically this many artists can make an issue feel like a jumbled mess, but for the most part it flowed pretty well. In particular I was a fan of Ryan Browne’s Swamp Corn story, and the double-page spread of Etrigan’s origin was well served by Dave Bullock’s art and the greys, blacks, and reds used to color the scene. The main artists Javier Pina and Carmen Carnero do a good job of tying the whole story together, with the action scenes feeling crisp and easy to read (though not terribly adventurous). Etrigan’s portrayal is also a real standout – he is both evil and regal, threatening and dignified. We close out the issue with a beautiful Yanick Paquette spread that gracefully represents Capucine’s movement into the afterlife and harks back to the early days of this series’ New 52 relaunch.

My major complaint about this issue is not really the fault of the issue itself, but rather the larger story – I’m annoyed Capucine was only around for 14 issues of Swamp Thing! We got a brief background of her in this issue, but I would have been interested to explore the character more and seen her promoted to full-time Swamp Thing companion. I appreciated how we were able to experience some of her personal growth in the final pages, but it may have felt much more poignant if she had been given more time to develop. Though I am saddened she has to leave, I’m glad she was able to go out in an extended-length issue that touched on each end of the emotional spectrum. Also, maybe now Etrigan will join the title on a more regular basis?