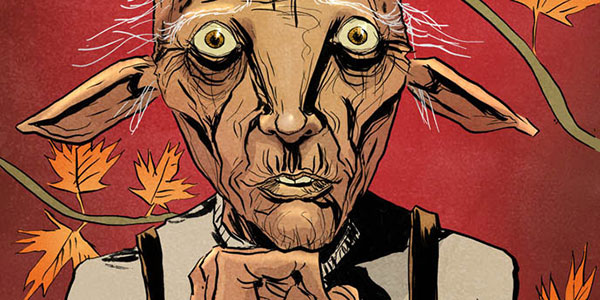 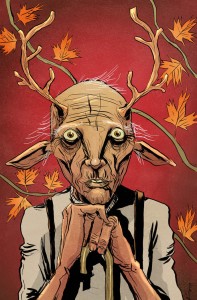 Sweet Tooth #40 marks the end of Jeff Lemire’s creator-owned tale of young Gus, an animal/human hybrid born into a world that’s dying around him. While an unexplained pandemic rages across the world, simultaneously killing humans and sparing the hybrids being born to human parents, this antlered boy has collected numerous friends and enemies. Chief among them is the old man Jepperd — once his betrayer, now possibly the savior of all hybrids to come. As the conflict dies down and the origin of the sickness is revealed, we are left with the final look into Gus’s uncertain future, and it is as beautifully poetic a tale as the thirty-nine installments that came before.

Without giving too much away for those who have yet to experience the magic that is Gus’s journey, I can say with great conviction that this is probably the finest final issue of a finite series I’ve had the pleasure to read (and I can assure you, I’ve read a few). Lemire manages to move the story of the hybrids forward without losing what made this series so special: the personal connection between Gus and his erstwhile father figure. Even in segments of the tale, told primarily in narration from the future and flashback sequences, where “The Big Man” is nowhere to be found, his shadow and influence looms over every word. Perhaps it’s because Sweet Tooth is less about survival than about moral transformation, even if that process has frequently extracted a mortal cost. And as Gus, Jepperd, Singh and others all metamorphosed across the span of the last three plus years, so too now has the planet itself. The final destinations for all of these players are indeed sweet wonders to behold.

More than in any issue that came before, Lemire’s pencils seem to sing with both joy and exhaustion for the completion of this textual (and I imagine meta-textual) journey. The subtle distinctions the artist employs between the faces of Gus and all of the earth’s newer children underscore the true finality of their struggle and an accelerated passage of time so eloquently. This next generation — those who didn’t have to experience the same deep hardship as Gus — haven’t the deep lines and weight about them that our protagonists have long had to bear. Their comparative lightness, combined with Lemire’s trademark otherworldly brushwork, brilliantly reinforces the narration of a new age dawning, one where family, innocence and love ultimately can overtake violence, sacrifice and fear.

Masterful dialogue. Poetic monologue. A double page spread to inspire a deep grin. And more than a single book’s share of moments to draw tears from even the coldest of hearts. All these factors have made Lemire’s conclusion to such a deeply personal epic ever so perfect. While I am sad to say farewell to dear, sweet Gus and his family of endearing misfits, I can’t imagine a better send-off. Bravo.