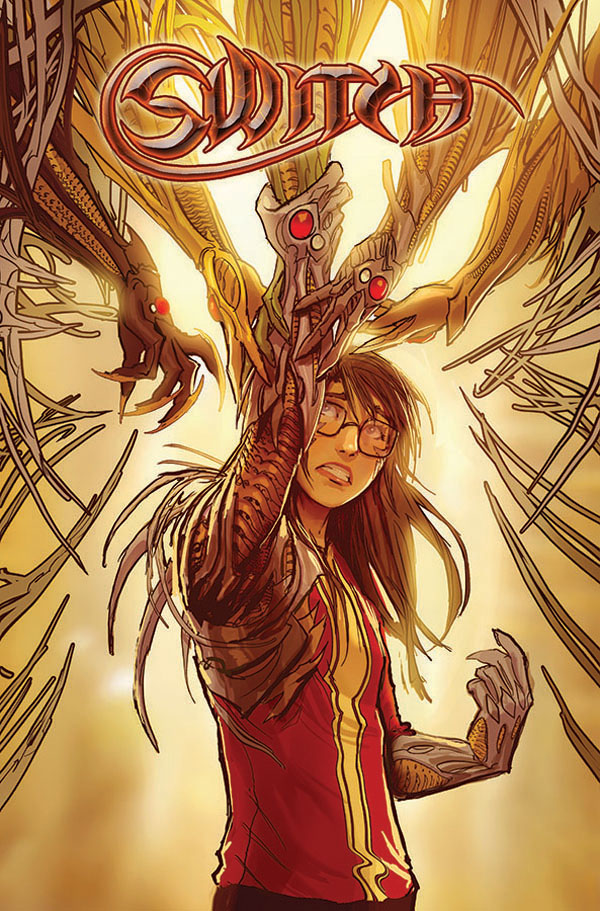 It’s a story you probably already know, but not like this. The embodiment of Darkness and Light come together to make a child, an entity known as the Witchblade. Over the centuries, the Witchblade chose hosts that would wield its power and fend off both the power of the Darkness and Angelus (the Light). Today, the Witchblade chooses a teenage girl named Mary and nothing for her will ever be the same.

Switch is not just a new Witchblade series, a new take on one of Wizard Magazine’s perennial cover girls for a changing comic book audience. It is that, but it’s not just that. Switch is a child of fandom and the Internet much like the Witchblade is the child of light and dark (I’ll let you decide which is which. Heh.). A deviantart web series by writer/artist Stjepan Sejic, Switch was reportedly not meant to be the next great take on a classic comic. It was a fan project that grew so successful, and attracted so much attention, that Top Cow brought it in-house.
That’s just… wow.

And you can see why with issue #1. Sejic is building on the legend of the Witchblade (which I will be the first to admit I know very little about outside of… um… boobs.) but upending much of the expectation that comes with the name. Mary is just a high schooler, not popular, not much of anyone really. She has parents and a kid brother. Likes UFOs and has a best friend, but not many more friends than that. When tragedy strikes and she comes into contact with the Witchblade, she bonds with the spirit of its first possessor, a cavewoman named Una. And then it gets freaky.

The art throughout is rough, but lends a certain amount of authenticity to Mary’s character and the world this story is happening in. Sejic illustrates young girls — Mary and Una both — with a wide range of emotion, inking himself with a fairly even quality of line. The end result is a little flattened out, particularly with what feels like transparently digitally brushed color, but the feel we get out of the characters’ expressions, blended with the dialogue, makes up for that effect.

For the most part, I longed for more moments with Mary throughout this issue, as about half of it indulges in the story of Tony Estacado, inheritor of the Darkness. Or rather, it’s about the characters protecting Tony from both the Darkness and Angelus. I think. There are quite a few figures introduced without much explanation of their connection to Tony other than as mystical protectors, and I have a feeling if I knew more about the original source material, I’d be able to connect the dots better.

Which is a shame, in some ways, because I am really invested in Mary. In the span of only about 15 pages, we get a strong sense of her character, beyond this sort of every-girl quality. She’s funny, has a great relationship with her family, feels outside most of the cliques in her high school. Sejic illustrates her average self and her transformation with realistic body expectations for a teenage girl. She’s the nerd, like so many of us were and still are. And she’s not the object of some fanboy’s wet dream — excuse my crudeness. She’s the real deal and represents so much of comic book fandom both literally and metaphorically.

And maybe that’s part of the trouble we have with recapturing some of these properties for new audiences. Batgirl works so well because Barbara Gordon never was the character dumbed down or appropriated by male fantasy. Ms. Marvel kicks ass as severely as her namesake did in the 1970s. But Witchblade has a complicated history, and not just on the page. Distilling that legend down into something that women and progressive readers can identify with positively is going to take a little bit of work. Where that’s evident is in the backstory crammed into this issue. Where that is clearly overcome is with Switch herself.

A good, but not great, start to an entirely new era of adventure for one of modern comic history’s standards, Switch takes the legend of the Witchblade — what it means in the comic and in the hearts and minds of comic readers — and turns it on its head. The more we see Mary taking control of the legend, the more I want to see some of that legend let go in favor of building something new. Here’s hoping that balance gets struck quickly as the series progresses.