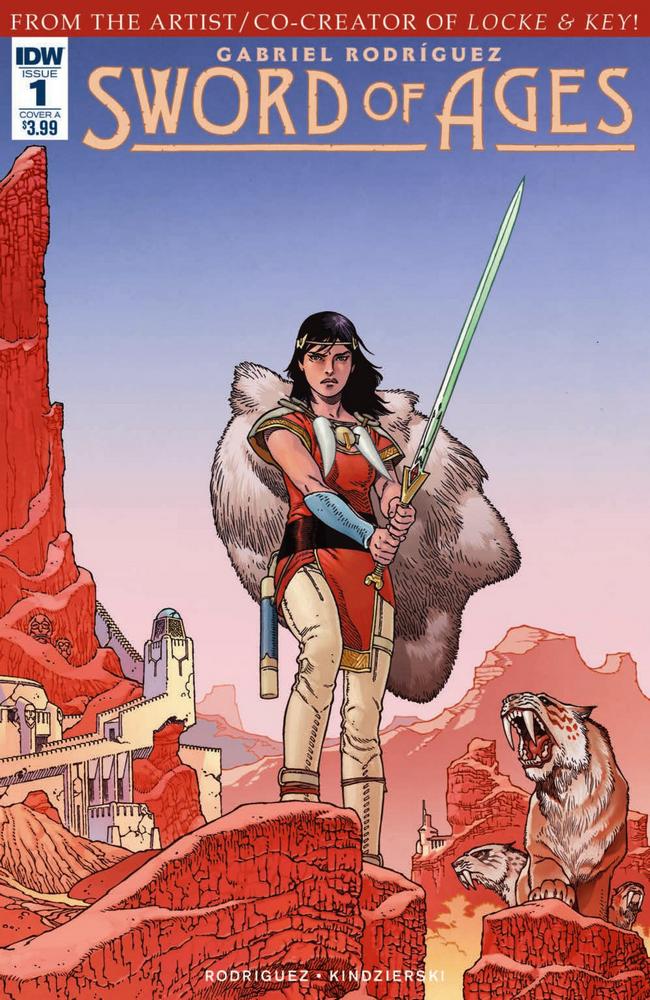 Deep in the depths of space, a family crash-lands on a far off world, only their newborn surviving. Now, that child has grown to become a woman in her own right and a chosen one of destiny in this first issue of Sword of Ages!

Rodriguez creates a tantalizing world of science fiction and fantasy before us, melding the two in ways that feel reminiscent of Nausicaä of the Valley of the Wind. He never quite gives you a full picture of what’s going on, providing tidbits of information on the world, our main character Avalon, and her destiny as the comic goes on. While I sometimes wish Rodriguez would expand upon certain elements of the plot and live in scenes a bit more, I do like the fast pace of the issue and I do feel like there’s a well-rounded story arc so far.

I will say that some of the stereotypical misogyny found in fantasy settings that are blatantly there for Avalon to turn on their heads feel more like frivolous objectification of woman and are trite tropes that seem to be there simply for the shock value and to set up Avalon as a girl power savior, which feels like a well-trod-upon and tired choice. Especially in this day and age, you really need to be more complex and thoughtful about empowering women in comics and this is bare minimum material, if that.

The art is spectacular. The retro comic book style to it all is captivating and I love the details on the creatures like the medusa, the talking apes, the hells creature, and the tigers. I love the variety of races living amongst one another as well. It makes me wonder what kind of place is this planet, what made it, is this earth or just a similar planet.

I like the coloring within the lettering. I like that each character has a distinct color that goes with them and that the color almost feels symbolic to what kind of character they are. It’s a nice detail.

Definitely check out Sword of Ages. Is it necessarily saying anything we don’t know already about feminism and the treatment of women? No, not really. However, this is the first installment of the series and the world in general is awe-inspiring and intriguing.