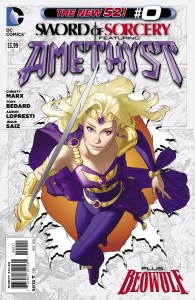 Amy Winston is turning 17 and it seems like any other day as an outsider at yet another school. Little does she know that her life is about to change forever as her mom finally makes good on her promise to take her home— to Gemworld — with danger following close behind. Meanwhile, the ultimate warrior of the near apocalyptic future, Beowulf, comes crashing out to slay the mythical Grendel.

DC is delivering my favorite of the New 52 Wave 3 titles so far with Sword of Sorcery, proffering two very different, but equally compelling, protagonists in Amy Winston/Amethyst and Beowulf. Marx and Bedard are both crafting very introductory tales here, but I actually can’t fault them for it. The take here is more fantasy than super-hero and readers may need a little more set-up for the less familiar genre tales. That said, Marx introduces us to a young girl who clearly knows right from wrong, isn’t afraid to stand up for herself or others, and isn’t introduced just to hang off some guy’s arm. Amethyst could very well be the anti-Twilight, and nothing could make me happier. Having Amy jump off to a world also defined by strong female (evil aside) leadership is yet another great addition to this new DC Universe.

Lopresti is perfectly chosen to depict both Amy in her drab normal world and the Princess Amethyst on the planet Nillaa/Gemworld. Able to shift Amy from withdrawn high school outcast to hardcore defender to confused, but determined princess is no easy feat, but Lopresti excels here. Ever since his run on Wonder Woman, I’ve been waiting for a title that could take full advantage of his ability to render fantasy beautifully. This is the title.

Saiz is certainly no slouch on the Beowulf back-up, depicting a strangely beautiful post-event future where all the remaining technology looks about a minute away from smoking and puttering out. I have never correlated Saiz with the fantastic — to date, only experiencing his beautiful line work on more down-to-earth titles such as Birds of Prey — but he’s definitely pulled out all the stops. His Beowulf is scary, sexy, man and machine all rolled into one, and despite all evidence that this is the future, it feels like a tale pulled right out of the middle ages. It’s hard to tell in such a short number of pages where Bedard is leading, but I’m definitely along for the ride. I came to the book for Amethyst, but I have a feeling both stories are going to keep me coming back month after month.

Sword of Sorcery definitely infuses The New 52 with several things it’s been light on to date — younger female characters, fantasy style storytelling and alternative futures, among others. I’m looking forward to the next installment already.