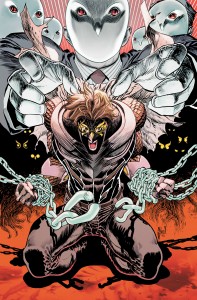 If a comic book could scream, it would look like the cover of Talon #1. The title character is hunched over, wrapped in chains, mouth open in rage. Above him hover several oversized masked figures with huge, menacing, grasping hands. Even ignoring the ad for the Arrow TV series, the “From the pages of Batman”1 text and two (two!) exclamation points seem to place this series as a spin off under the burden of heavy expectations.

While Talon #1 hinges on the fact that Calvin Rose’s “escape from the Court of Owls!” is a never-ending task, I’m happy to report that the title itself does an admirable job of escaping the shadow of its Bat cousins. In the course of just 20 pages, Calvin establishes himself as a skilled, tenacious, and clever combatant. While the major legwork of establishing the history of Calvin’s connection to the Court of Owls was left to Talon #0, any new reader should have a clear grasp of the essentials after a text-heavy, but appropriately moody first page.

In fact, if you can get past all the exposition, Talon quickly sets itself up to both be essential reading on its own as well as a critical piece of the puzzle for anyone interested in the rapidly expanding Court of Owls mythology. While a simple escape story might have made for an incredible miniseries, Tynion and Snyder give Talon a firmer ongoing foundation by introducing an ally who promises to allow Calvin to take a more active role in opposing the Court.

For good and for ill, there’s still a lot to be hashed out. While bringing in Sebastian Clark as a character who can give direction to Calvin Rose’s hatred of the Court of Owls is probably a good move, the series will have to work to avoid the sort of “old guy with the brains directing the young guy with the brawn” clichés that could threaten to make the title feel like an 80s prime time rerun.2 There’s also a lot to still be filled out in Calvin Rose’s character.3 We know he’s spent most of his life running from the monsters who shaped him into an assassin as a child, but he’ll really come to life when we see more of what he loves and not just who he hates.

But this is a first issue! There’s still plenty of time to smooth out the edges and fill in the details. For now, pick up Talon #1 for the action, but stay for the conspiracy theories. If Tynion keeps up the mix, we’re in for a good time.

1. This of course, is a naked (and largely inaccurate) attempt to latch Talon’s fortunes onto DC’s top selling title. Calvin Rose himself has never appeared in the pages of Batman.

2. Or Batman Beyond. Or Person of Interest. Or, with a constructive spin on the gender of the parties in question, Gail Simone’s Birds of Prey.

3. Most of which, for better or worse, will probably fall to the writing. While Guillem March’s art is appealingly fluid and expressive, especially in combat scenes, it has to be said that he uses the same rough set of expressions for every character, and if you’ve seen one of his characters with angry/crazy eyes, you have a pretty good idea what the next angry character will look like.