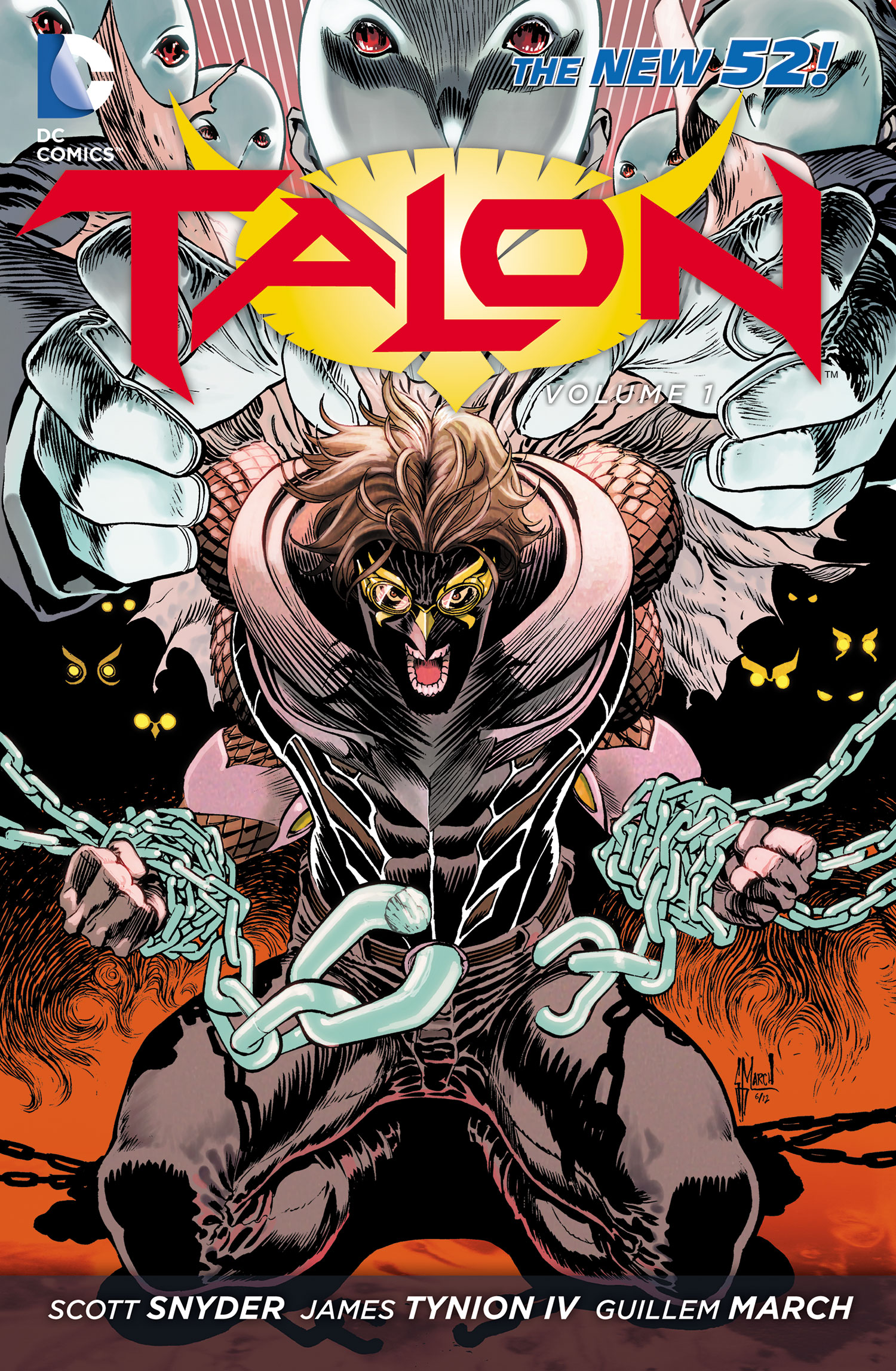 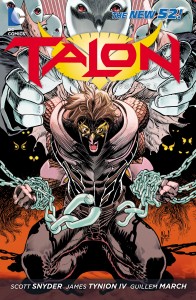 In the wake of last year’s brilliant Court of Owls epic in the pages of Batman comes a new protagonist for the DC Universe — Calvin Rose, the last living Talon and escape artist from Haly’s Circus. On the run from a vile organization with whom he can no longer stand to cooperate, Rose has a mark on his head and must use his training to take down the very people who recruited him in the first place. Teamed with an erstwhile historian and his own former Court targets, the Talon runs headway into danger and, quite possibly, death.

Snyder and Tynion have plotted a fast-paced, Jason Bourne-style adventure that builds on the history they only scratched the surface of in Batman and delves more deeply into the international threat that is the Court of Owls. Rose is a curious character, neither hero nor villain, but clearly a man on a mission that happens to overlap with a sense of the greater good. There’s no question he cares deeply for those around him — particularly the woman and child the Court sent him to slaughter on his final, unfulfilled mission — but I’m not sure that good will would extend to the general public the way it might for Batman or Nightwing. And herein lies an interesting contrast, particularly with Nightwing, another Haly’s Circus graduate who could have ended up leading the life Calvin Rose has known, for the kindly intervention of Bruce’s guardianship. Calvin has much of the prowess and personal exuberance that one gets frequently from Dick Grayson, but none of the deductive smarts that came from a tutelage with the world’s greatest detective, a fact that’s left him open to working in concert with others, for good or ill.

Tynion’s supporting cast fleshes out this first storyline magnificently, as we are introduced to Calvin’s opposite number, Casey Washington, daughter of brilliant inventor/Owls target and mother to young Sarah. Casey is brass, smart, organized, and as far from damsel in distress as you can find in comics today, making her a strong addition to Calvin’s somewhat clever, but more aggressive form of attack on the Court’s holdings. Calvin’s other confident, as well as the several Talons who appear throughout the course of the first volume, all feel well fleshed-out and have clear motivations that belie all their movements. These are no mindless brutes, and their complex natures require a more sophisticated approach from Calvin than he probably is ready for, adding yet another layer of enjoyment to seeing Rose’s progress from introduction to the shocking end of this first book.

March’s pencils are a bit rougher than I’m used to on the title, having to balance against strong, but copious bits of dialogue and thought boxes. For my own taste, I prefer a cleaner set of inks, but his sense of movement and energy reinforce Calvin’s acrobatic background effectively and coherently, as well as mitigate any sense that the book is overwritten. Panel layouts encourage rapid pace when appropriate and his character designs for the additional new Talons Calvin must face are truly next step for the body of work done so far in this area for DC. For as much as I think Calvin himself suffers a bit from March’s pencils, I can’t deny that everyone surrounding the main character look all the better for his unique talent. A single chapter is illustrated by Juan Jose Ryp and Vicente Cifuentes, breaking the flow of March’s work early on, but delivering a truly gorgeous representation of Calvin amid a burning building. The exceptionally detailed linework is a stark break from March’s more liberal representations, but I can’t say I’m disappointed to have experienced it. It’s a beauty to behold. Can’t wait to see what that pair land on next.

A fairly unique take on a character whose roots arise right out of Gotham soil, Talon does so well what very few creators have managed over the years: add a new protagonist or villain to the Batman Universe that seems made to last. After a literal avalanche of Bat-allies marching through the titles for the last two decades, it seems to me Calvin Rose has a unique enough beginning  — and foundation in one of the best Batman tales of the last decade — to make a permanent home in the mythos. An adventure emphasizing speed, conspiracy, duplicitous alliances and escape artist mentality, Talon is highly recommended for those who want to try out something original for the New 52 that captures a flavor no other book has at the moment.