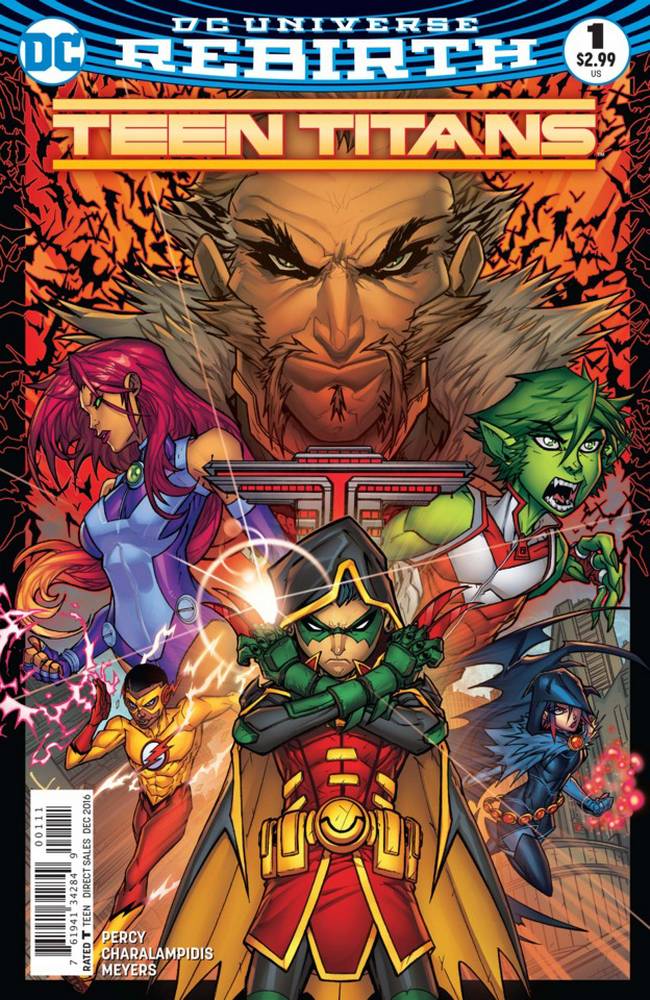 “I lived in the shadows of great men. No longer. I burn too brightly for that”. When Damian Wayne turns thirteen, he decides to make some friends. But will the Teen Titans want Damian as theirs?

I remember sitting in the seats of a DC Comics Panel at Long Beach Comic Con, listening to Meyers talk about this exciting new chapter of the Teen Titans. This first issue lives up to my expectations and more. Percy and Meyers deliver a fantastic first issue, solidifying Damian as my favorite Robin at the moment. From the get go, the issue grapples with the complexities of Damian’s ancestry, his dynamics with other people, and how he feels about himself. Like my favorite run of the Teen Titans (the 1980s run), this Rebirth series starts with a person in need of aid assembling a team of young heroes to help them overcome a terrible problem. However, Damian provides his own slightly ridiculous twist to it. I just love it, he’s basically what a super villain would be if they decided to be a hero.

Not only is the writing spectacular, with lines like “we, um, expected someone taller”, but the art is fantastic. There’s something almost lighthearted to the art style that harkens back to the old Teen Titans television show. The style prepares the reader for something that isn’t some gritty action comic, and that’s perfect for the Titans! The Teen Titans are a team that revolves around the relationships and emotions of the people within the group, not action, so it’s right up the their alley. Add Jim Charalampidis’ great eye for colors and you’ve got some wonderfully done art.

There’s this perfect splash on page thirteen that really sums up the entire issue. Damian stands in triumph in front of the four he brought to help him, to become his friends. There’s this smug look on this face. He knows he’s already won them over, even after they’ve escaped his grasp, even as they surround him. Behind him looms the shadow of a Batman, something more reflected in Damian’s aspirations and goals than he himself at the moment. Because he is becoming Batman. He already knows what they’ll say because, as the issue explains earlier, “[he] always gets what [he] wants”. There, he confidently tells the group, “I am Robin—Son of Batman—and this is the new Teen Titans!” This scene makes this issue.

Read it. Read this comic. Damian is a treasure, and though he will probably not lead the Titans at this very moment, I can already tell that this marks a new chapter in his life, a chapter of great growth. Bringing Damian as the glue to the Titans this time around brings a new swath of enemies to choose from and I can’t wait to read more.