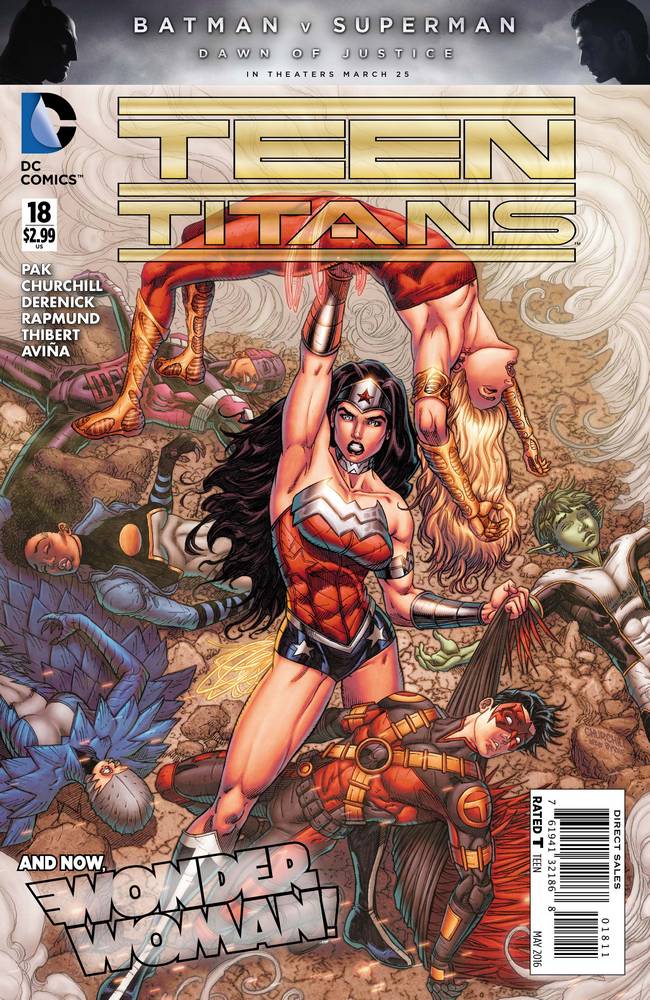 History repeats itself as Titans prepare to battle with Gods.

Trapped by Bunker’s bricks, Cassandra is relaying her intent to the Teen Titans, though they are not fully willing to trust her. Meanwhile, Red Robin and Wonder Woman have a brief discussion about the demigoddess and her past deeds. As both sides come together, Wonder Woman puts her lasso of truth to good use, ultimately deciding to help the Titans and her sister.

This story makes good use of current continuity by tying the events to the Azzarello/Chiang run of Wonder Woman that started with the roll out of New 52. These events seem to have been a long time coming and Cassie’s role within them is not surprising. The inclusion of characters like Bunker and Power Girl are a nice touch, as they could’ve easily been lost long before, and Bunker was temporarily gone from the team.

Cassie’s feelings and the dialogue throughout the issue were the strong points of Pak’s writing. This installment is heavily focused on Wonder Girl, even if she doesn’t take up much of the talking, and is setting the stage to explore more deeply her heritage and her response to finding out this information. In the midst of gauging Cassandra and figuring out her intent, Cassandra’s emotions stand out, even if she doesn’t take up her armor until the later pages of the issue. Pak’s dialogue between Cassandra and Diana heightens the sense of mistrust between the two sisters, but also the Titans and the demigoddess. It’s hard to tell what’s the truth and what’s not, and using this juxtaposition of dialogue was a great way to convey the tension and confusion between each of the characters.

Ian Churchill and Tom Derenick on pencils know how to fill a panel. Throughout nearly every page, there’s movement and action, and even in the more still moments there does not seem to be a sense of calm. Norm Rapmund and Art Thibert are rather light on inks, but such a style helps to make the issue less heavy. I liked their work in the shading of many of the objects and characters, and during the action scenes in particular the inks provide a dusty feel that enhances the images. Tony Avina’s colors are bright, even in the darker parts of the issue, giving a sense of levity to the action and emotions of the overall story.

Working with Pak’s parallel dialogue between Cassandra and Wonder Woman through the issue, there’s an amazing page recounting some of the events regarding Lennox in Wonder Woman. This page could be a story all its own, as the dynamic art from the team comes to the fore, capturing a wide range of emotions and action. The team clearly outdid themselves as this spread was a shining example of their work, from line to ink to color.

Teen Titans #18 is a deeper exploration in to the character and history of Cassie, one which I’m glad tied into Diana’s larger story. There are some great dynamics throughout the issue and the art brings life to the actions and the emotion running throughout this installment of the series. For a rather simple and straightforward story that dives into lore for Cassie, I say pick up this issue.