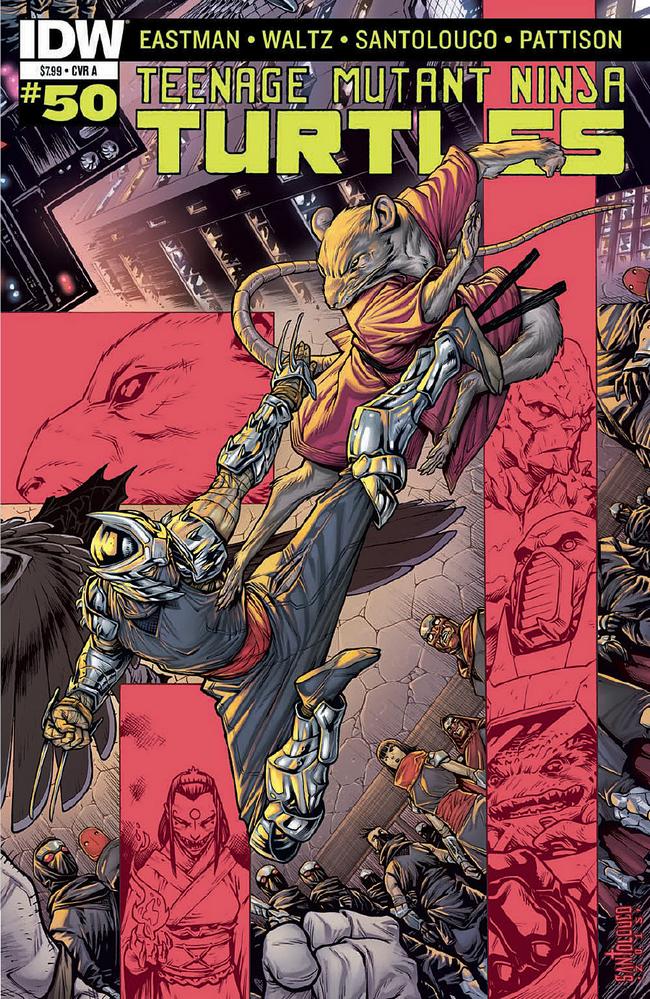 It has came down to this. For four years IDW has been building TMNT up to a crescendo – a climax that hopefully pays off for long term fans of the series. It is not the final issue but a resolution to one of the biggest plotlines for the series and an end to one of the key components of the entire TMNT franchise. In this issue the Turtles and Splinter take on shredder once and for all.

Now, the franchise has visited this angle numerous times in various comics, movies, and tv series. It is nothing new but few versions of the event take into consideration the long history between Splinter and Shredder. In the IDW universe, Shredder, Splinter, and the Turtles are all reincarnation of the past. Their past lives dictate the actions between the two sides. The end game achieved by Eastman, Curnow, and Waltz managed to find a balance between reslove and new beginnings. With the major storyline of the past 4 years  (truthfully, of the franchise in general) resolved there was a dire need to set up future arcs, which is done well. The seeds planted by the writing staff really sets up a strong and bright future for the Turtles. There is a sense of where do they go from here present in this issue that will get long time fans excited.

Waltz does the scripting here, as per usual, and delivers a solid script across the board. He continues to find the humor within the story and doesn’t let it become completely dour and violent. That said this issue does feature the Turtles and gang being more violent than most casual fans are used to seeing. There isn’t any overt gore but the Turtles do take the battle to the limits at time to ensure victory. This boundary is referenced in the story and causes one of the four to protest the methods of the others. This is implied to be explored in future issues of the series. This is one of the better things about the comic and has been one of the best things about the series. There has been consequences to their actions and something that isn’t blown off.

The art by Santolouco and Smith provide a nice 1-2 punch. Santolouco handles the main story and has been a regular for the Turtles for sometime now. He knows his way around the half-shelled heroes by now. The man has a knack for blocking out action sequences with composition in mind. Each page has an ebb and flow about it. The action moves the readers eye clearly across the page and does so in a clean manner. The issue feature a wide cast of characters and each are given personality and emotions by Santolouco. He evens finds emotion in a robot turtle. That alone is a feat within itself.

Smith takes on the flashback sequences set in feudal Japan. His style contrasts Santolouco’s nicely to provide the aforementioned 1-2 punch. Smith is charged with providing the emotional center to this story. He isn’t drawing mutant brawls but instead he is telling a tragic story between two friends whose differences lead to a divide so great that it can never be repaired. It is a challenge as a comic artist to provide dynamic feel to dialog heavy sequences but it isn’t one that Smith shies away from. The story looks beautiful and he finds the emotion to make it the tragic tale that the writers intended.

Teenage Mutant Ninja Turtles #50 is a landmark issue that doesn’t disappoint. It is a resolution to the long brewing plotlines and a satisfying read. The issue in of itself is quick to pick up on and relatively new reader friendly too. The Donnie as a robot angle withstanding, most casual fans could find this issue easy to pick up and read. The emotional beats are self contained  and the plot, despite being a climax to 4 years of stories, is also written with a single issue in mind. That is what is asked for in landmark issues as they are the ones people are likely to pick up on a whim. The art is superb and will have the readers coming back for more. The emotions both Santolouco and Smith are able to bring to the paper is fantastic and well worth the price of the book. There are flaws in the pacing and random threads being seeded that take away from the plot. These are minor, though.